Can powered exoskeletons convey the same advantages to animals as they do to human soldiers?

A few years ago we saw stories about the development of legged autonomous vehicles for accompanying soldiers on foot and carrying heavy loads for them. The prototypes tend to look like cows. This did not prove fruitful and funding has discontinued for this idea. 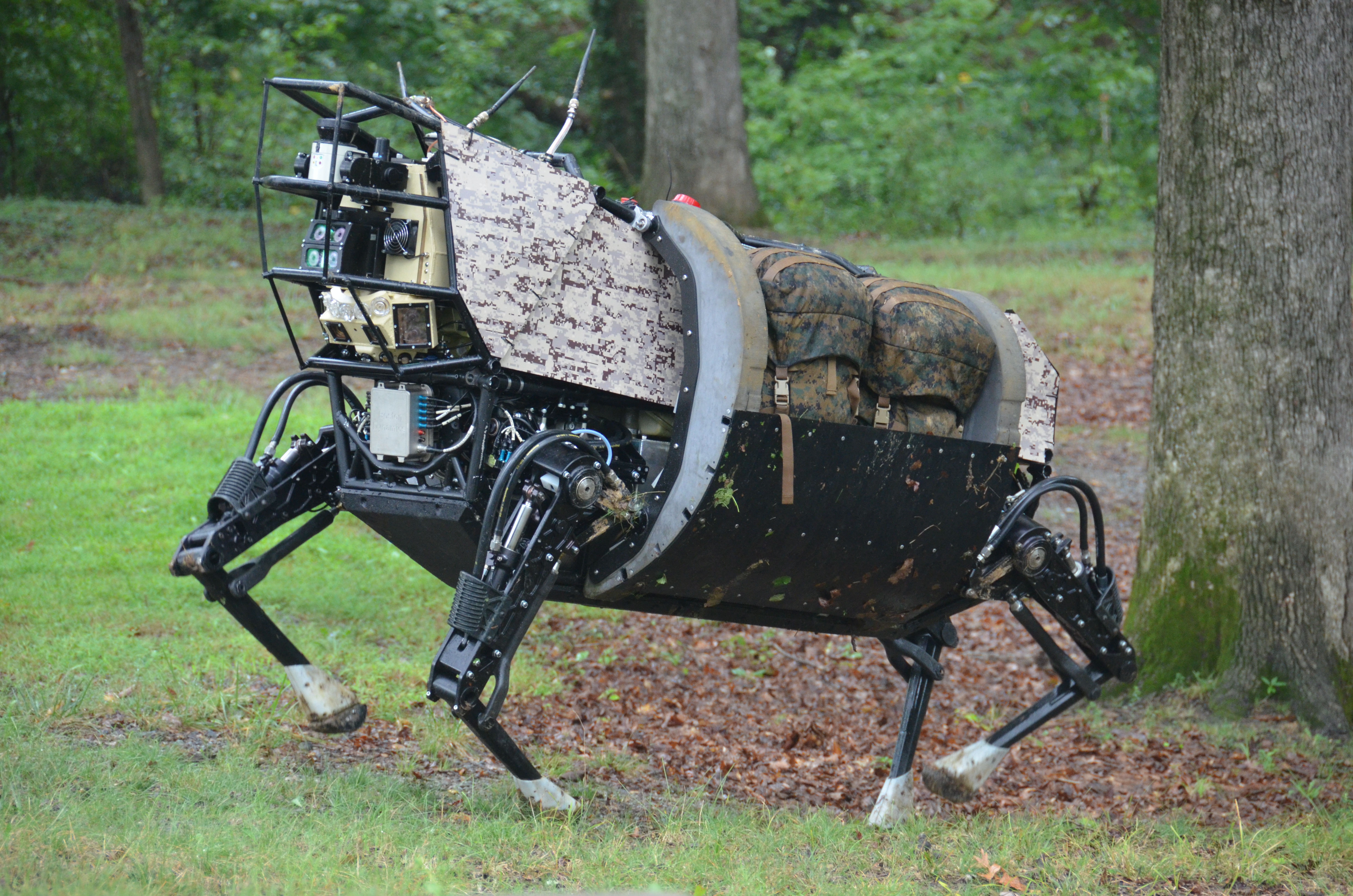 However, the idea of a powered exoskeleton for a person to wear seems to be doing well, and development continues. 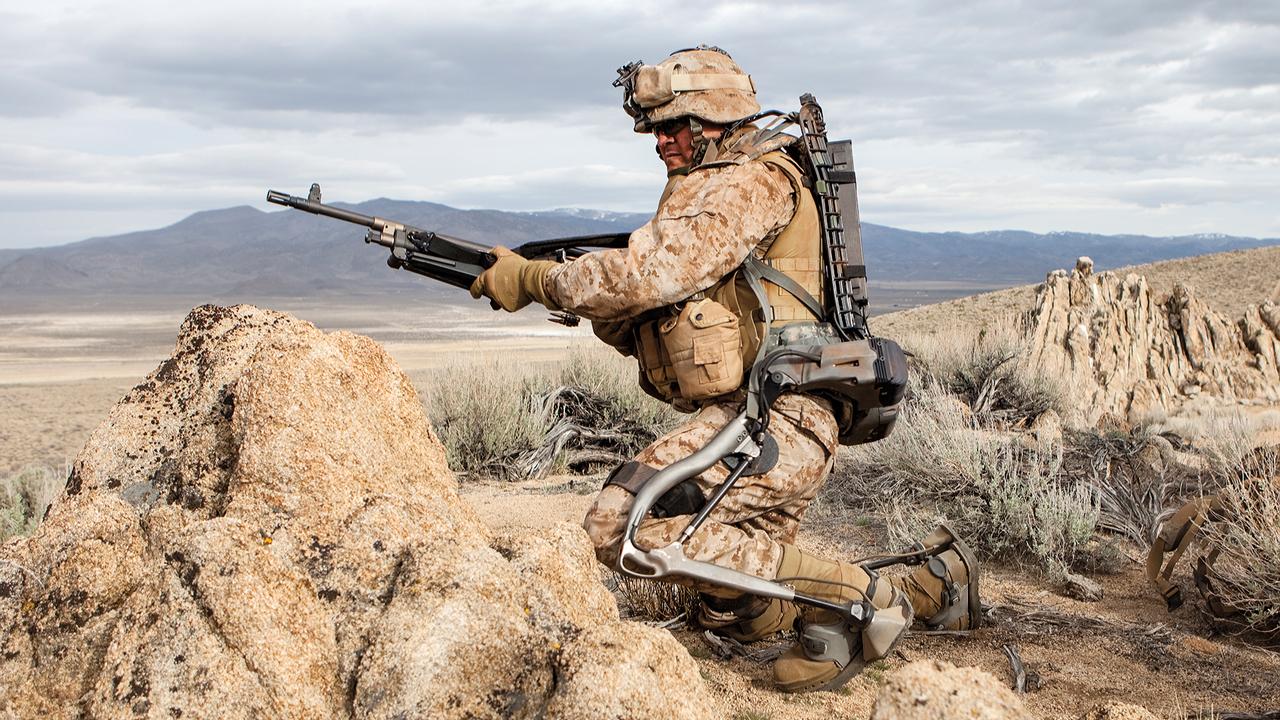 Although autonomous beasts are not working out, why can’t you use the idea that is working along with real animals that have served these roles for thousands of years? That is, take a donkey or a mountain goat — it knows how to maneuver in rough terrain, where to place each footstep even in the worst cases, not fall over, and not wander off a cliff. Put the animal in a powered exoskeleton, so it can handle enormous loads (including its own armor) and generally not get tired.

Horses have been with us for a long time, too. Well-trained war horses gave us dressage which is now an Olympic sport! So certainly we could train horses to use such powered suits. And while those robot beasts had trouble following commands and understanding what needs to be done, a dog such as an Australian Shepherd understands this, and if himself equipped with a similar suit, will eagerly keep the pack animals in line.

So, can powered exoskeleton convey the same advantages to animals as it appears to for humans? Will this be practical, given that exoskeletons are already developed for the people and animals are already available in these roles?

I’m thinking of a future as described in the railguns question where we have superconductors and battery tech that allows the energy density of chemical fuel but direct to electricity.

But, the question works in any case where mecha for people is something that is being done (therefore it’s practical).

The issues facing autonomous beasts would not be prevented by sticking a pack animal in an exoskeleton.

The reason Boston Dynamics LS3 was not accepted by the US Marines was for reasons of noise (It was powered by a small engine) and difficulty with field repairs. It was sufficiently advanced to be able to traverse most terrains and right itself if it fell.

If you had an animal in an exoskeleton it you would still need to power the exoskeleton and making repairs to the system would still be problematic. Additionally you now have an animal that you need to feed, train, and worry about getting shot who will panic as soon as the shooting starts.

Animals are extremely adaptable and have shown to be able to learn and adapt at similar speeds to humans in various situations (e.g. training them to do things).

The biggest effort aside of money would likely be the time it takes to get an animal acquainted to this new situation.

The biggest issue though would be that these animals will still have their own mind, so no matter how well trained and domesticated it may be, there's always a factor of uncertainty. While this also hold true for humans, humans at least have a goal they work towards, some motivation to do a job - with animals there is no direct goal/motivation aside from maybe a treat or something along the line.

So, considering cost and time it takes to train an animal that will still need time-outs, rest and motivation, it becomes cheaper and more effective to just build a robot/semi-autonomous-drone. most of the tech needed is already available as these artificial muscles and actuators need plenty of math-power behind them to properly move.

To answer your question directly, yes a powered exoskeleton would be able to augment the natural abilities and potentially make animals them more useful.

However it would not be very practical. Building a machine around an animal is very challenging in its own right. Then you have to power it and train the animal to use it. Also, if you want the machine to be able to move with the animal to keep balance, for example, it is going to have to be every bit as dextrous as the animal. It will also need one heck of a sensor array to monitor the animals' movements to keep up with it. Sure, an animal could be trained to cope with the difficulty of operating a less dexterous machine, but that is time-consuming. Boston dynaimcs has already created robots that can balance themselves.

If you really want an animal like a machine, it's easier to build the machine like the animal rather than make a machine that the animal can use.

Update in light of modifications to the question.

It's still more practical to just build machines because there is no training necessary, just program and go. The machine could use the space that would be taken up by its animal operator to be more powerful/durable than an animal could ever be.

Not in the current form

The BigDog project was designed to be a robotic mule. Carrying heavy loads across uneven terrain. Places footsoldiers can reach but wheeled vehicles cannot. The robot was not considerably stronger or faster than a live animal. But it was preferable in a combat situation because it requires no food and knows no fear.

It was ultimately rejected as the engine was too loud for combat use. It immediately gave away its position, and the position of its handlers, to any hostile forces nearby.

Equipping a live mule with power armor combines the worst aspects of animal and machine. Now you have a loud, easily-spooked animal that needs to eat and sleep. That means carrying feed on its own back or pausing to graze several hours a day.

The only advantage of the hybrid system is it might be stronger or faster than either of the animal or machine. However, as I said, this was never the original purpose of the project.

Not the answer you're looking for? Browse other questions tagged reality-check technology warfare fauna .

81
Plausible Reasons for usage of Combat Mecha
6
A World of Low-Tech Critters
9
Magical Insectoid War Machines?
4
Powertrain for mid-19th century mecha
17
What tactical advantages can be gained from frenzied, berserkir units on the battlefield?
8
Soft vs Hard: Which is the best system for a military exoskeleton?
3
Just How Omnipresent Would Cheap Cross Laminated Spider Silk Be?