What are the consequences of using limited anti-gravity for steampunk-style airships?

The Scenario: Airships are awesome, but in the real world airship design is greatly constrained by the problem of lift. It seems like this, above all else, is what makes the elegant and compact ships of steampunk and fantasy unviable. Balloons need to be enormous to carry adequate mass. Steam engines, armor, and other fun things are prohibitively heavy.

Often, all of this is politely ignored. But I'd like to try and design a world in which the problem of lift is partially circumvented by the addition of a single unreal element, with defined parameters and otherwise realistic consequences: in this case, a machine that can produce limited antigravity. 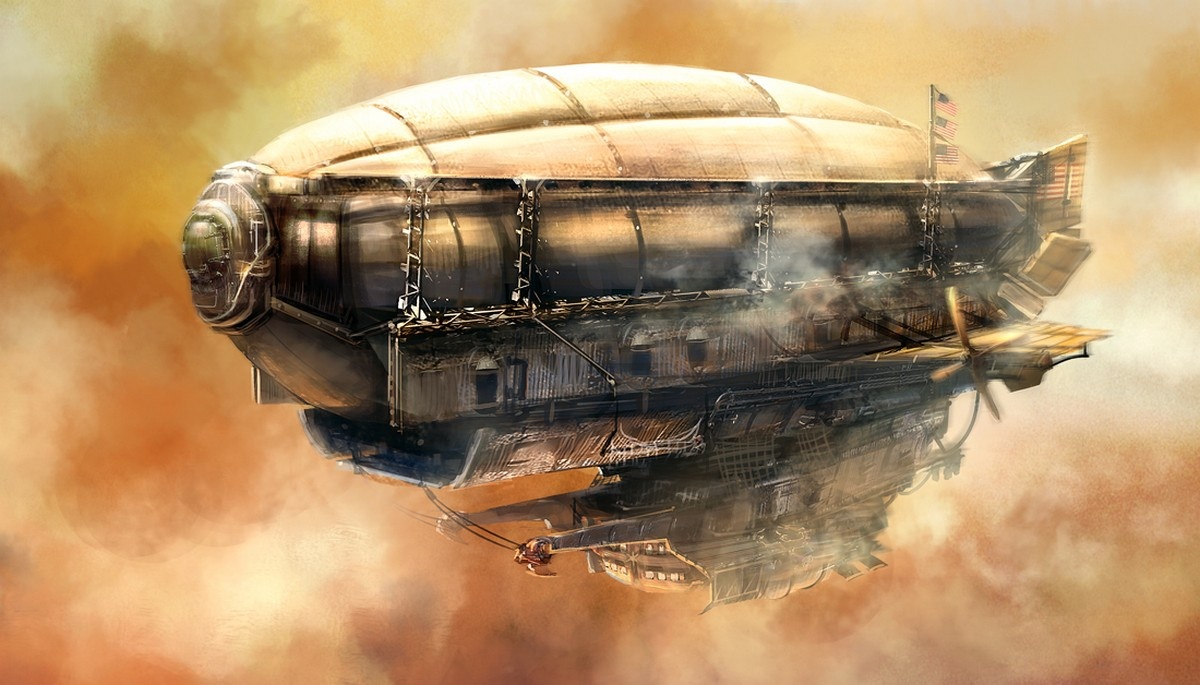 My knowledge of physics is cursory, but so far as I know, such a device isn't possible within known laws. But setting aside, for this question, how it could be created, here is a possible rules set for it after the fact:

These rules are intended as a reference to help evaluate the consequences of the core idea; if they prove inadequate I'm happy to modify them. The end goal, of using limited antigravity to create a wider field for designing interesting and useful airships, is what's important. 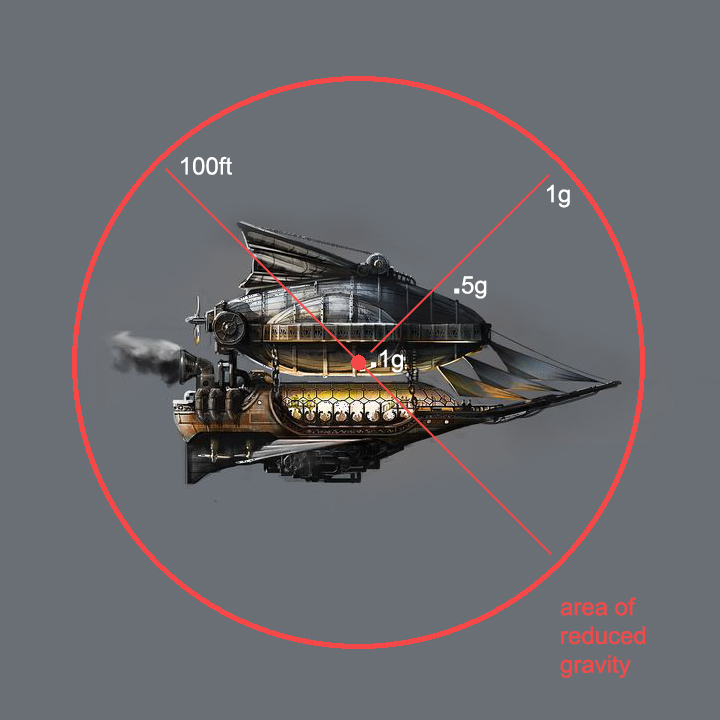 The Question: Limited antigravity would be a good aesthetic fit for this world, but I'm aware that messing with a physical law in even a small way can invite all kinds of unforeseen consequences. So, given the above premise, will a limited antigravity field have such wacky effects on physics (on the ship, crew, lift gas, surrounding air, the relation of the ship to the spin of the earth, or anything else) so as to be prohibitive? And if so, can the above rules or the typical airship design be tweaked to compensate?

Where does the energy go?

Assume you have a water wheel. Project this field over the left portion (slightly including the upper middle portion) of it. Now the right portion is heavier, so it rotates to the bottom. The portion of the wheel in the field moves, and the exposed part tries to fall to the bottom... the wheel spins. Make the wheel more massive for more force.

The counter to this would be to make the fuel expended equal to the energy required to keep the mass 'afloat' (or at least lessened for gravity's pull). The issue with this is that if you're already expending this energy, why not expand it to rotate, say, a propeller, or as a fuel propellant? Surely such methods would be less complex, cheaper, and less prone to failure.

This would also happen to a lesser extent, I'd imagine, inside the envelopes of gas; the more-gravity-affected gas at the top (further away from the anti-gravity field's core) would try to fall down, and the less-gravity-affected gas would be pushed to the top. I'm not sure if this would reach equilibrium, or if the momentum gained from this would allow it to remain in a cycle. If it would remain in a cycle, you once again have a perpetual motion machine which causes all kinds of issues and would fundamentally change how your world works, again, unless you balance it out with fuel costs in which case...

Low-Gravity's effects on the human body

Given your image, the crew onboard the ships would deal with <0.5 g constantly during long voyages, which appears to average to ~0.3 onboard the ship. Reduced gravity has a detrimental effect on humans. I don't know of any studies for this level of reduced gravity on humans (it doesn't come up much) but "zero gravity" or "microgravity" does happen to astronauts in orbit/free fall around Earth. During the NASA shuttle flights (all of which lasted less than 18 days) astronauts were noted to have some bone and muscle loss, and some experienced back pains. Obviously your sailors would have a less extreme case of this (still having meaningful gravity), but they'd also probably be onboard the ships for much, much longer than 12-16 days.

Long-range ballistics would be extremely complex to calculate

Artillery and cannon shells, in the real world, can be fired and the arcing gravity-induced path (and final resting location) can be determined through math (estimated fairly well, or precisely figured out including wind speed via calculations and formulas). Passing through invisible clouds of gravity modification would royally screw up the arc, leaving it nigh impossible to calculate in a useful manner.

In the Space:1889 RPG, they had liftwood that provided an anti gravity force. It wanted to rise in gravity. IIRC, by flooding the wood with electricity or a special gas (or both) you could increase this effect.

I would recommend that any antigravity effect also be limited like this. Have it only effect the device itself. Therefore, it must be attached securely to the ship or it will tear itself free from the ship and fly up until it ran out of juice. This avoids any kind of overlapping field effects. It also means that the crew doesn't have to remain strapped down to prevent them from accidentally launching themselves off the ship when they take a step.

If one uses a plate of anti-grav material, the ship could be hung from that. This would change the appearance as the balloon would be gone. You could replace it with, the material carved into the shape of a dragon or a bird of prey (not the Klingon version).

So imagine the material is difficult to find, hard to manipulate, but will not have negative effects regarding the crew. Also magic could be used to propel the ship, in fact the ship might have sails to catch the magic wind springing forth from the magicians hands.

No mechanical or electrical requirements, although those could certainly be added in much like the magic wind. Anything additional like that would allow break-downs, damage being critical in battles, shooting the wizard, etc.

dcy665 beat me to it by half an hour (well done mate), so I'm going to try to get in depth while riffing on the same concept: Hang the ship from the antigrav source rather than housing it in the hull.

Center it above the ship so that crew effects are eliminated and most everything on the ship simply behaves in accordance with normal physics.

You could use internal gas bladders underneath the ship's center of mass or maybe something like outriggers or pontoons filled with some lighter than air substance.

That gives you lift, but you also need motive power. Fans instead of oars, use sails rigged in novel ways to use wind power, a huge steam powered propeller... Just remember that the larger your ship, the more wind is going to be a factor. This is going to be compounded by how much you have to rely on gas for lift. The less gas needed, the more nimble the ship. if you extend this out, you might be able to regulate lift by how much power goes to the anti grav mechanism. Without that mechanism, your craft is heavier than air.

Stuff like that could help keep things in a nice steampunk theme without having to get too wrapped around the axle with the physics and other effects.

You could even do fun things like a plucky hero making trick shots with cannon using the altered ballistics from the cannonball passing through the anti grav field above the ship. Have her aim the cannon to make a shot just to the right of the anti grav dohickey on the next ship over to get extra range and take out the bad guy sneaking up on you out of the clouds on the flanks :)

Not the answer you're looking for? Browse other questions tagged science-based physics gravity flight airships .

5
Will this anti-gravity airship balloon give me a working vacuum airship?