Imperial capitals in the Crimea

Strange question, but then again I think this forum positively welcomes those! I'm aiming to create a campaign centred around a fictional 13th century Byzantine successor state based in the Crimea.

My main question is where, logically, it would make better sense to base this city, there are two options I can think of centred around the Kerch straits (pictured).

On the West side of the straits you have Kerch itself, the area is well elevated, the straits give it excellent defences though it is somewhat dry and water is more limited.

On the East side of the straits you have plentiful water, good farming land, however you are also bordering the steppes; any steppe hordes can sweep down and attack your city, however they would have to get through some fairly nasty swamps and rivers to reach the city.

Where should I locate it? I'm slanted towards the West side but i'm not sure if the water problem would be solvable. 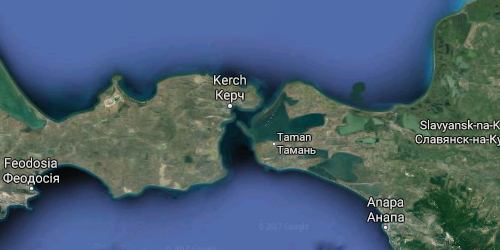 internal-consistency alternate-history medieval
Share
Improve this question
edited May 23, 2017 at 20:35

If the west side's water situation is unsolvable then they might put defenses on the west side and use it for control of the strait and as a bolt hole in response to an attack from the steppes. The swampy lands might be enough to slow attackers enough to evacuate across the strait. There would also have to be enough defense in depth to allow evacuation.

So, people would live and farm on the east side. The military and, likely, rulers would live on the West side. If the granaries are on the west side, the drier climate would be better for storage. I would also put the religious institutions on the west side to reinforce the fact that the townsfolk need the west side.

If the people can evacuate across the water, steppes attackers would go through all that effort for nothing. Also, if the military gets good at water navigation, they can probably put harassing troops behind the attackers for hit and run attacks. All this is an effort to discourage further attacks. The combination of being a pain in the rear to attack and having food for trade might be enough to work out a peaceful arrangement with the nearest steppes tribe.

If the steppes tribes are too much of a threat, then most of the population can be on the west side. Then water may have to be transported up to the city. In this scenario, you only have farmers on the east side. The evacuation would be quicker that way but more effort needs to be put into water and food transport.

I just looked at the map on Google. It shows water sources and farming on the west side. It might not be as good as on the east side but, combined with farming on the east side, I think the west side can support a decent sized city. I don't get a good feel for relative elevations so I don't know how difficult it would be to get water to the city from the small lakes up there. So, city on the West and farming villages on the east sounds like a good solution if you want grain for trade.

You are spot on with Kerch. Why not playing along with real history and use the actual Byzantine successor state in Crimea, the Empire of Trebizond?

This region was called Perateia and recounting its story (and how it seceded and eventually became the Principality of Theodoro further west) would make a great historical novel.

It's possible that reality was even wilder than whatever fiction we could come up with. So perhaps if you contacted a Byzantinologist and got acquainted with the literature about it (or even translated primary sources) you could strike gold!

Let me know, because I would look forward to read it.

Not the answer you're looking for? Browse other questions tagged internal-consistency alternate-history medieval .

8
The Catholic Caribbean Viking Kingdom?
4
How can I convince the Maritimes to join the thirteen colonies?
4
How do I successfully create the Imperial Federation?
6
Alternate History: A European Empire in the Middle Ages - Feasibility
11
Imperial Kingdoms?
15
Can the Mongols conquer France?
6
How plausible is this volcanic eruption event? Dark Age without total extinction of Stone/Bronze/Iron Age people?