My planet has an increased axial tilt, resulting in crazier winters and summers and higher temperatures. For most places, the temperature never drops below freezing - even in the winter, but the days can be as short as four hours during this time. I want my fauna to reflect this, and rely less on photosynthesis (which will also give me the chance to make everything less green!). However, I also want quite a bit of oxygen in the atmosphere (around 30 percent of it to be this way). I've already looked up fungi and dodder style plants, but they don't appear to create oxygen.

My question is, how could I go about creating plants like this in a scientifically plausible manner?

Plants create oxygen as a byproduct of photosynthesis, using energy from sunlight to break apart molecules of water and carbon dioxide and reform them into carbohydrates (such as glucose) and oxygen. If you want a substantial amount of oxygen in your atmosphere, that oxygen has to come from somewhere- either from oxides in the ground (most likely quartz crystals or metal ores), or from CO2 in the air. And liberating oxygen from any such source requires energy. That energy has to come from somewhere.

There are a few exothermic reactions that release oxygen (such as the "oxygen candles" popular on submarines: $3NaClO_3 + 2Fe \to 3NaCl + Fe_2O_3 + 3O_2$), but their reactants (sodium chlorate and iron metal, in this case) have to be more reactive than oxygen in order for the reaction to work at all. By the time life starts developing on your planet, any such compounds will have already broken down, and any oxygen released will be bound up in things like quartz, iron oxide, and carbon dioxide.

You mention fungi and the parasitic dodder plant, and that they do not produce oxygen. This is true. Fungi are actually more closely related to animals than to plants; they produce energy by breaking down biomass produced by other organisms and reacting it with oxygen to produce water and carbon dioxide.

In order to produce oxygen, your "plants" will need to need another source of energy to break down oxygen-containing compounds (most likely carbon dioxide) in order to get at the non-oxygen components, and release the oxygen as a byproduct. All Earth plants power this process with sunlight, because it's abundant and it works. However, some organisms have other energy sources. The chemosynthetic bacteria in giant tube worm guts, for instance, create carbohydrates by reacting carbon dioxide with hydrogen sulfide:

This produces solid sulfur as a byproduct, rather than oxygen; however, a chemosynthetic organism with a source of hydrogen could react it with carbon dioxide instead:

Such a hydrogen-eating organism might release oxygen as a byproduct; or, more likely, it could react the oxygen with more hydrogen to produce water and quite a bit more energy.

However, I doubt that chemosynthesis will play a major part in your planet's ecosystem. As on Earth, chemosynthetic organisms will be relegated to dark, oxygen-poor areas with sources of reactive chemicals such as hydrothermal vents at the bottom of the oceans. Instead, the foundation of the ecosystem will be based on photosynthesis.

You've got a planet with a high axial tilt where, even in the dead of winter in the polar regions that get only a few hours of sunlight per day, the temperatures rarely drop below freezing. There's only two ways for that to be possible: either there's some serious greenhouse effects going on, or the lower latitudes and the summer months get a ridiculous amount of sunlight. If there's a strong greenhouse effect, that means that there's a lot of carbon dioxide, methane, or other greenhouse gases in the atmosphere. Gases such as methane will quickly react with all the oxygen that you have; while the presence of large amounts of CO2 indicates (to me, at least) that your plants aren't doing a very good job of absorbing it and converting it into oxygen.

Which leaves sunlight. And lots of it. Photosynthetic plant life will be even more abundant on your planet than it is on Earth.

However, you also note that you don't want everything to be green. No problem: there are many different pigments that Earth plants use for photosynthesis, with green chlorophyll only being the most common. See the table here: chlorophyll a is the familiar green stuff, chlorophyll b is yellow, chlorophyll c is blueish-green, chlorophyll d is found in red algae, and chlorophyll f absorbs far infrared light, so it probably appears colorless to our eyes. 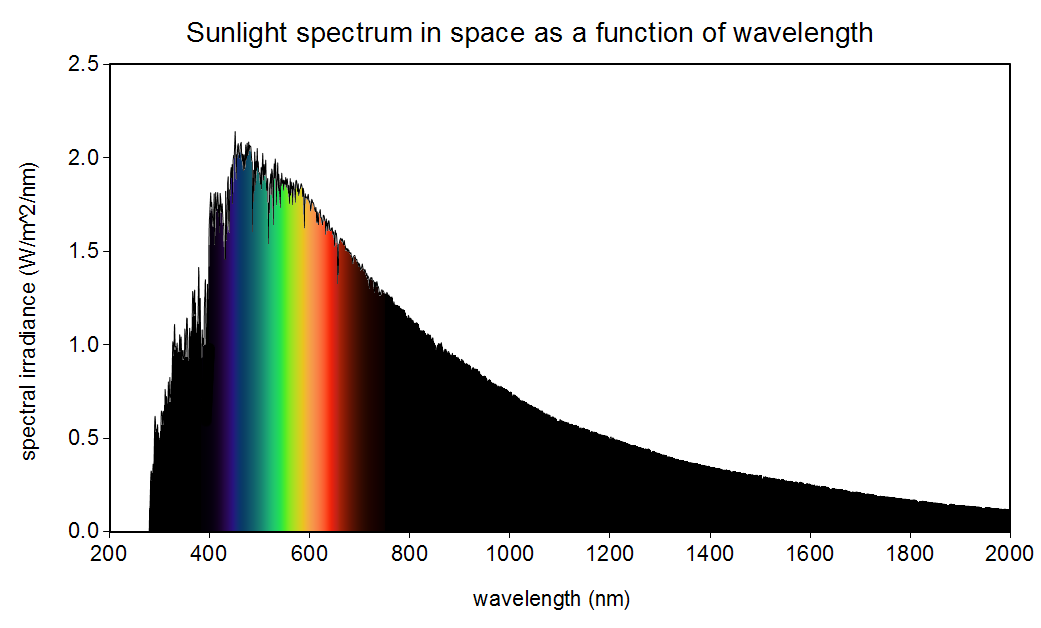 Perhaps the first photosynthetic bacteria to evolve on Earth were good at absorbing green light, and blanketed the surface of the oceans. Other bacteria evolved chlorophyll a to take advantage of the red and blue light the surface microbes left behind; and then the purple surface bacteria all died out... for some reason. Maybe. Or maybe chlorophyll a just popped out of a random mutation, worked well enough, and evolution ran with it. There's no way to know.

If you want polychromatic flora, just go for it. There's no reason why plants that evolve on another planet need to look just like the ones here.

You need a source of energy for the life-form to live. Other than sunlight, we have chemical energy in real life.

It produces oxygen as a waste product when it harvests carbon from the air as a source of material, so you can decouple that from photosynthesis. Look up autotroph.

No reason why this life-form would be green, though.

Poke around in existing questions here on WB! I recall discussing “flex fuel” life-forms※ that could readily shift between available energy sources, which is what you want here: use photosynthesis when possible, but use chemosynthesis in various forms if that’s the only energy available.

※ Here's one place I touched on it. But I think the idea of adapting organelles has been written up in more detail, too.

You can make a chemosynthesic plant.

Imagine something like bacteria, it makes atp but not nadh from an respiratory electron transfer chain that is powered by something like reacting rocks to sulfuric acid(sulphate reducing process), and, now because the synthetic machinery may have been made in a photosynthetic organism, the bacteria can not reduce carbon dioxide without making oxygen in the process(reverse electron transfer chain) and the bacteria have no machinery to consume oxygen.

Now you get an organism that uses a fuel cell powered by suboptimal reactions(sulfur oxidization by iron, oxidization of h2s by manganese, metallorespiration, oxidization of iron by nitrates or sulfates, etc.) to drive a high level energy consuming reaction(like the photosynthetic electron transfer chain) that makes the actual material that organism uses, the process that gives out oxygen.

Aerobic metabolism takes long time to evolve(if impossible to develop by evolution alone), and if that happened in somewhere outside of bacteria...... expect to see a lot of deep oxygen sources and oxygen generator that does not depend on the sun.

Recently scientists have discovered two separate species of microbes that use two independently different novel metabolic pathways to produce oxygen without photosynthesis. So it might be possible for non-photosynthetic plant on your planet to produce oxygen without photosynthesis using one or a combination of these two pathways. Here’s two articles on these microbes, if you’re interested in having a read for inspiration: https://www.sciencedaily.com/releases/2022/01/220106143640.htm

Not the answer you're looking for? Browse other questions tagged internal-consistency fauna photosynthesis .

6
Can you have reduced visibility (due to fog) but an atmosphere that is still breathable?
3
How can I realistically make a worldwide government that works with my fictional world with different magical races?
3
Would this setup of a terraformed moon hold up?
6
Is this Martian creature plausible?
9
How to sustain this sedentary hunter-gatherer society?
3
How could very large (but not that large vehicles) be used in combat?
1
What are some substances that paralyze voluntary muscles in the human body but not involuntary ones, and do not cause any harmful side effects?
6
A substance that would cause a human to explode if eaten, but not your pet
15
Are jumping ships feasible? (Not jump drives, but ships that jump)