In this article, scientists are investigating river channels on Earth, Mars, and Titan to see how rivers modify their landscapes. The following quote caught my eye:

Rivers are, in a way, topography bystanders that always flow downhill.

But is the above statement necessarily true? In this question the OP asks about terrestrial rivers temporarily flowing uphill on a map, but most of those answers involve "resolution" issues (where average gradient is uphill but local gradient is downhill), pressurization, or alternate physics. The answers to the linked question are all local geographic tricks. OP there is focused on earth and cartography. I'm looking for physics on alternate worlds, not necessarily talking about water. Titan has hydrocarbon rivers, Europa has cryovolcanoes, Venus has molten rivers.

Would it be possible that a certain combination of environment, chemistry and physics could create "uphill rivers" across significant distances and timescales?

For instance, a naturally occurring superfluid that flows upward between multiple reservoirs or something more exotic?

EDIT: To clarify the parameters of the question, a river is defined as a naturally occurring stream of water or other fluid flowing through a channel toward a reservoir, such as an ocean or lake. This means things like underground streams certainly classify as rivers, but something like a geyser does not (since it does not flow toward a reservoir).

science-based physics alternate-worlds
Share
Improve this question
edited May 24 '17 at 19:25

There are a few possibilities that spring to mind:

I doubt the last two are likely to occur and the first is not a 'river' as such, but I'm not sure what it is you're after so perhaps those ideas will fit.

Rivers do flow uphill. Twice a day, most of the time. 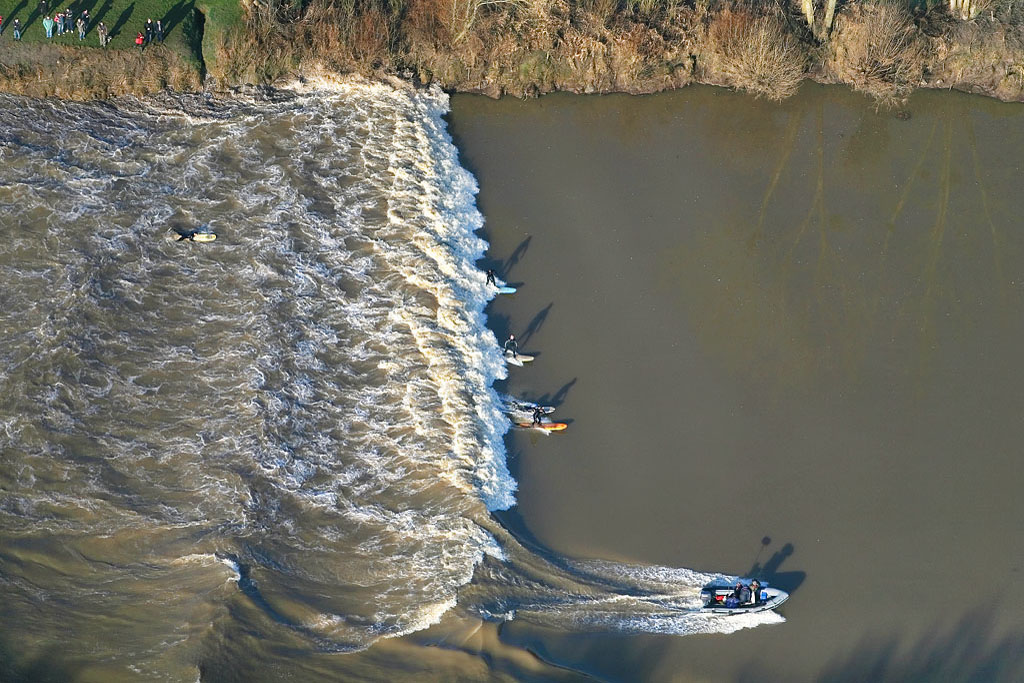 This is the Severn bore in England. The water on the right is the normal, downhill flow of the river; the water on the left is the incoming tide, flowing uphill. Tides are a pretty complex phenomenon, but the important part (for our purposes) is that the gravity of the Moon is causing water to flow differently on Earth.

Let's define 'downhill' as 'towards sea level'. That's generally what it refers to. In that case, to get a river to flow 'uphill', or away from sea level, all one needs is a temporary or local effect that draws the water up along a slope in order to balance itself out. For instance, if a river encountered a gentle ridge that had a very, VERY, VERY dense object inside it, it might be pulled up to the top of the ridge, briefly flowing uphill, then drop away in a waterfall on the other side. 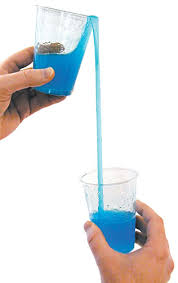 from https://www.teachersource.com/product/poly-ox-a-self-siphoning-gel/chemistry These viscous fluids can siphon themselves. The intramolecular adhesion between the long molecules are such that the fluid can be dragged uphill as long as the ultimate destination is lower than the start.

Polyox is the one you always see. The molecule has loads of intermolecular hydrogen bonds which is (I think) how it can pull itself along.
https://dowac.custhelp.com/app/answers/detail/a_id/2108/~/polyox-properties%2C-products%2C-and-structure-in-personal-care-applications 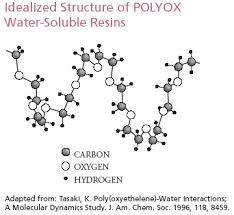 Supposedly PVA slime (the glue/borax slime) is also self siphoning & it should be. But I bet it is tricky to get the consistency right, and I found no images. Super long carbohydrates like dextran should also be able to self siphon.

It would be a gooey river for sure. If the waterfall part were slow and gooey enough I wonder if you could float up it against the current, Minecraft style?

How about a dense gas?

You have something hot, a geothermal vent or something, at the bottom of a hill. Your liquid passes over this and evaporates but, because it is dense, still stays low down. With the heat rising up the hillside the gas moves with the air current until it gets to the top of a hill, where it is cooler, and condenses again and runs down as a liquid.

So it isn't a river of water but more of a thick fog...but it might work.

What about an underground river? Of course it would have to go downhill eventually, but the water may be "sucked" uphill from a large reservoir, but exit the earth at some point far away that's lower than the reservoir.

As for how it would form in the first place I don't know - perhaps it was once a more traditional underground river, but it dried up for a time, and then a huge flood started the water flowing "up" the channel (at this point the reservoir level was higher than the highest point of the underground channel) and pushed it far enough to come out the other side. After the flood receded, the siphoning process continued.

Of course if the reservoir ever dried up enough that air could get into the tunnel, then the flow of the river would stop forever (or at least until the next superflood)

If river, of any kind, would flow "uphill" it would actually flow upward. The only reason water river goes downhill is that there is something beneath it. If the surface ends water flow down and we call it waterfall.

So the easiest river of your kind to imagine is a river of hot air being obstructed by ceiling tilted as some degree.

I can think of three possibilities that would make an upward-flowing river:

When we think of rivers, we generally think of water flowing over rock or earth, down towards the ocean. But what if the "river" were lighter than air? A light gas would float upward, along a ceiling. If the gas originated deep in the earth, it would follow a long, winding channel, not unlike a river, just upside down. For a full cycle, the gas undergoes some chemical change at the end point - a "lake" of gas, that turns to liquid and runs down into the earth, eventually returning to the original path.

Alternately, the river could be underwater; perhaps oil, floating on still water; it bubbles to the surface, following underwater channels. A river of oil would seem to run uphill, as the water it is displacing forces it up.

The second way a river could flow uphill is external physical forces. Tides are one example, but a moon large enough to cause significant tides in rivers would be... dangerous. Instead, natural vents cause inverse waterfalls; as water, quickly speeding along a narrow river, flows over a thin vent, the force of the super-heated gas shoves it upward and forward, launching it into a pool a few feet above. The water continues to rush forward, possibly encountering other vents that jump it up again and again.

Alternately, a natural wind, shaped by a rock cavern, whirls around over a pool, whipping the water into the air, where it splashes against the walls of he cavern. The water runs down from the top and is caught by a lip, which funnels the water out, now much higher than it was. A series of caverns like this could transport water up a considerable distance, as long as the wind is blowing - and there are places on earth the wind almost always blows. For a beautiful image, the water may be transported high into the air, then splashes down as a "vanishing waterfall" - as the water plummets, the wind simply blows it away. It's likely the water eventually makes its way down to a lake below, where the process repeats.

It could be that highly-pressurized water from deep in the earth, or water that's come from a great height, is forced through a natural nozzle; the water would arch upwards, appearing to travel up-stream. However, the enormous erosion forces would keep this from lasting very long, and technically, the water would always be flowing down - but for a brief moment, the water would jet upwards.

A world with different physics might have that. The master of this, Greg Egan, has exactly that in his Dichronauts universe.

He works out the consequences of a “double plus, double minus” space-time metric. More generally, you can invent reasons why some directions are different from others, either due to the nature of space itself or some external effect like the magnetic field of Forward’s Dragon’s Egg.

His web page includes an explaination of the effect and a physics sandbox where you can stack blocks and see it slide “up” the ramp in suitable conditions!

Since the force of gravity is directed vertically downwards, we will define gravitational potential energy to be a positive multiple of the height of the object above the ground. This is consistent with the kinetic energy associated with vertical motion always being positive. So far, this is the same as the situation on the surface of the Earth.

I must say though, seeing it in a simulation of the new physics is a lot “harder” SF than any amount of handwaving!

Not the answer you're looking for? Browse other questions tagged science-based physics alternate-worlds or ask your own question.

301
How do you prove you're from the future?
378
How would Facebook Sysadmins prevent the summoning of Cthulhu?
265
What's the smallest change to physics required to allow magic?
29
Explaining uphill rivers scientifically?

29
Explaining uphill rivers scientifically?
4
Drawing rivers on a continental scale map
10
How to connect rivers with canals in Europe with late medieval technology?
8
I'm going to have to redraw most of my rivers - what do I need to know to make them true to life?