Changing the emission spectrum of the human body

Let's say I'm a superhero or a magic space-wizard with the ability to change the color of any object I touch i.e. change what wavelengths of light it emits. If I want to become invisible, I could then theoretically reduce my body's emission spectrum to emit either mostly wavelengths of light invisible to humans (like water) or no light at all. Or, if I wanted to use this power offensively, I could touch a person's skin and raise their emissivity to something in the realm of vantablack, essentially making their bodies absorb 99.9% of all the light that hits them, causing them to rapidly die of heat stroke.

My question is, in both of these examples, what negative effects, if any, could changing the "color" of a human body to almost total transparency or total absorption cause? Would turning your internal organs invisible to match your invisible skin interfere with any biological processes necessary to life? Could changing the color of a person's skin to something drastically outside the normal range (using magic mind you, not chemicals or gene therapy) poison or harm them?

science-based invisibility
Share
Improve this question
asked May 19 '17 at 21:55

To become "transparent" and obtain invisibility that way, all of your substance must stop interacting with visible light in any way. This has physical and chemical consequences that don't really agree with a long, healthy life of more than a few milliseconds. Color absorption and re-emission depends (also) on electronic shell geometry in atoms and molecules, and is therefore linked to their chemical properties. Not uncoincidentally, the Bunsen test identifies some chemicals by the colour they lend to a flame, and substances like vanadium have a color that depends on its oxidation state: 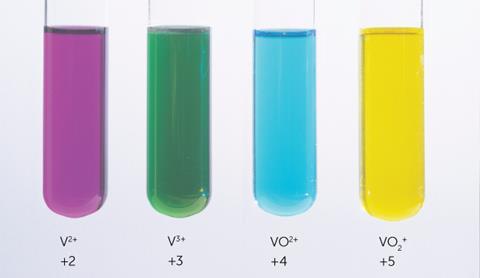 It is difficult to figure exactly the negative effects of turning transparent, because most sorts of chemical reactions would be disrupted. My guess is that you would go limp and collapse due to neurotransmitters in the brain having become inoperative - sort of a super-nerve gas.

If we tuned exactly the invisibility effect to the visible spectrum only, fewer reactions would be disrupted - and I'm not sure which. So, you could go slowly mad as @JDługosz suggests. Or your body could slowly decay as some structural proteins no longer fold in the correct way. My own impression is that the end would be extremely quick, as a living body requires hundreds of thousands of chemical interactions to orchestrate with each other.

Let's do this anyway

On a second read, there is an obvious loophole that I missed. I did say that you must not interact with visible light (coming from outside), and yet you must keep interacting with electromagnetic radiation if you want to live.

Now: is there some kind of electromagnetic radiation with which living bodies do not significantly interact? There is - radio waves; the longer, the better.

So we can magically build shield that affects visible light and radio waves, turning the ones into the others.

Now, when you come between an observer and an object, the visible light from the object hits your shield and gets turned into ELF radiation, while keeping its speed (otherwise you would create a detectable lensing effect). The ELF radiation goes on, passing through your body harmlessly and without being harmed, until it hits the other edge of the shield and gets turned back into the same visible light it was at the beginning. Then it arrives at the observer, making him none the wiser. 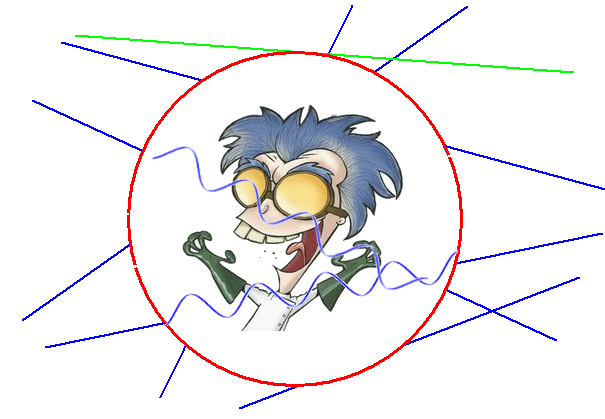 Another possibility, working less well because it must rely on boundary effects, is a shield that converts incoming radiation into something else (phonon quasiparticle scatterings?) until this something else comes together again at the antipodes of the point of impact, where the original radiation is reconstructed. Unfortunately, this would also transform the shield into a sort of fish-eye inverting mirror, shifting all radiation by the shield's diameter multiplied by the cosine of the incidence angle and generating an unmistakable distortion: 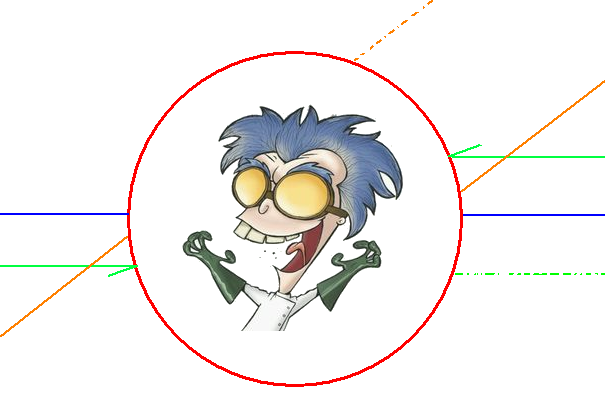 To achieve invisibility incoming rays should follow the dotted path; they actually follow the solid path. The blue ray is spot-on, orange and green rays get shifted, the green one almost as if by birefringence.

Problems the handwavium frequency-swapper still has or may have

Whatever the effect used to obtain the magic frequency shifting, it's likely to operate strangely or not operate at all in border cases: for example with light hitting the shield tangentially (in the first "mad scientist" image above, the green ray). In this case you might be mostly invisible but still get some strange effects, and, looking into an "empty" room, see something like this:

Also, what would happen if the shield enclosed some area from where an image is expected? If the "bubble" incorporates a part of the floor, what would one see from outside the shield? If the shield extended beneath the floor, a hole in the floor. Otherwise, probably some sort of crater, again giving the trick away. The shield would need to float a few micrometers above any surface, and the wearer would need to wear shoes with a lot of very tiny blunt needles, so many that the surface is not damaged, and yet enough to let light through and allow his footprints to (almost) disappear too.

For the same reason, filling a room with smoke would lead to less apparent smoke being visible in the volume where a shield operates - you'd see a sphere of lessened opacity walking around people, and you could even use large quantities of frankincense to smoke out invisible infiltrators.

The device might operate both ways, turning visible light from the inside into radio light. The wearer thus becomes a weak radio emitter (the visible light coming from the inside is the reflection of incoming radio waves). The wearer becomes capable of seeing radar - and being maybe blinded by one. Also, a radar would spot the shield as a disruption source, even if it probably wouldn't be able to estimate its distance. Two radars would be able to triangulate the position of the invisibility shield with enough accuracy, though.

If the shield acts on other radiation than visible and radio, things can get icky and dangerous as, say, incoming infrared or ultraviolet get turned into lethal X-rays. So, a shield that's fully absorbing at frequencies above the visible octave might be needed.

We might also be forced to wear a reflective shield to avoid being cooked by infrared radiation.

And, of course, there is the problem of navigating. If the shield only works on visible and radio, or even better can be locally pierced with a small periscope, all well and good; otherwise you'd need to literally walk blind (or perhaps resort to sonar).

The absorbsion and emission of a substance is due to the electrons on the surface, and for transparent materials, the electrons within.

That’s also what accounts for chemical properties. The side effect is to change the very nature of the material, so it no longer works properly in the living cells.

Side effect will be death and possibly disintegration.

Would turning your internal organs invisible to match your invisible skin interfere with any biological processes necessary to life?

Hemoglobin in the blood is the molecule responsible for its red color. Hemoglobin is also responsible for Oxygen transportation from lungs to all the organs. The red hue is strongly dependant on the carried species (if it is bound to oxygen it is more red, while if it bound to CO2 is more blueish).

If you make somebody's blood transparent you are basically getting rid of all the hemoglobin, and all the body cells would soon die of anoxia.

Not the answer you're looking for? Browse other questions tagged science-based invisibility .

3
Colors of Things Outside the Spectrum
15
How do you circulate cryoprotectants through the human body?
0
Calculating the solar spectrum received by a planet
2
What's the plausibility of making a body part invisible?
10
Spaceship Emission Security
6
Making Titan's atmosphere transparent
9
Extreme adaptation: evolutionary narrative for Vantablack-like skin pigment
8
Can the human body hypothetically be magnetized/magnetically aligned?
9
Plausibility check: heat emission from extinct volcanoes