Is a Fire-Freeze Planet Possible?

Just thinking if it is possible to have a Fire-Freeze Planet?

A planet with permanent Ice cover on one hemisphere while a hot terrain on the other side of it. A planet that may have moderate equator while the hemispheres are extreme.
I am talking about Temperature Here.

Please Help!
I am developing some kind of game based on this.
Thanks.

planets climate extreme-terrain
Share
Improve this question
edited May 22 '17 at 7:41
Professor Xenophiles
asked May 17 '17 at 4:30

A tidally locked planet, close to the star will have extremes of heat on the sun-side, and extremes of cold on the other. There would be a temperate belt right at the edges, but I doubt that life more advanced than small multicellular globules could develop.

In that case, you want an elongated orbit and a strongly tilted axis of rotation, such that 'summer' for one hemisphere is a long way from the sun, but for the other it is near the sun. So one hemisphere gets an extreme, if short, summer, whilst the other has a cold, long 'summer'.

This still wouldn't be enough; we'd need a way of storing heat in the 'hot' hemisphere to get it through it's long winter, probably via shallow seas, and the 'cool' hemisphere could have extensive land/highlands with glaciers to reflect heat, furthering the North-South divide. This may bear some resemblance to Earth in the Mesozoic, with a large supercontinent (Gondwanaland) over the south pole and not so much land in the North. Even on earth today, the presence of Antartica means that the Northern hemisphere is ~2K warmer than the South.

So - a combination of orbital features, land mass distribution, albedo feedback and handwaving should do it.

If you want to go with something different, what about a geological explanation. One side is highly volcanically active. Maybe it's due to a fractured crust on that side, the result of a collision with another body early on in its formation, causing a wound that never "healed", but instead remains highly geologically active. Or perhaps the core of the planet is shifted for some reason to be closer to one side of the planet than the other, causing the crust on that side to be thinner and more active. The other would be relatively stable, geologically speaking, but because of all the volcanic ash in the air, it is in a sort of nuclear winter, where little to no sunlight penetrates the cloud cover, causing the other side to be cold. A literal fire and ice planet.

You want a hot Eyeball planet. Tidally-locked (like mentioned above), with a thin atmosphere to avoid efficient heat redistribution and not too much water.

There can be some variety too. Here is an image of the possible climates on Proxima b (from climate models). Details here or here. 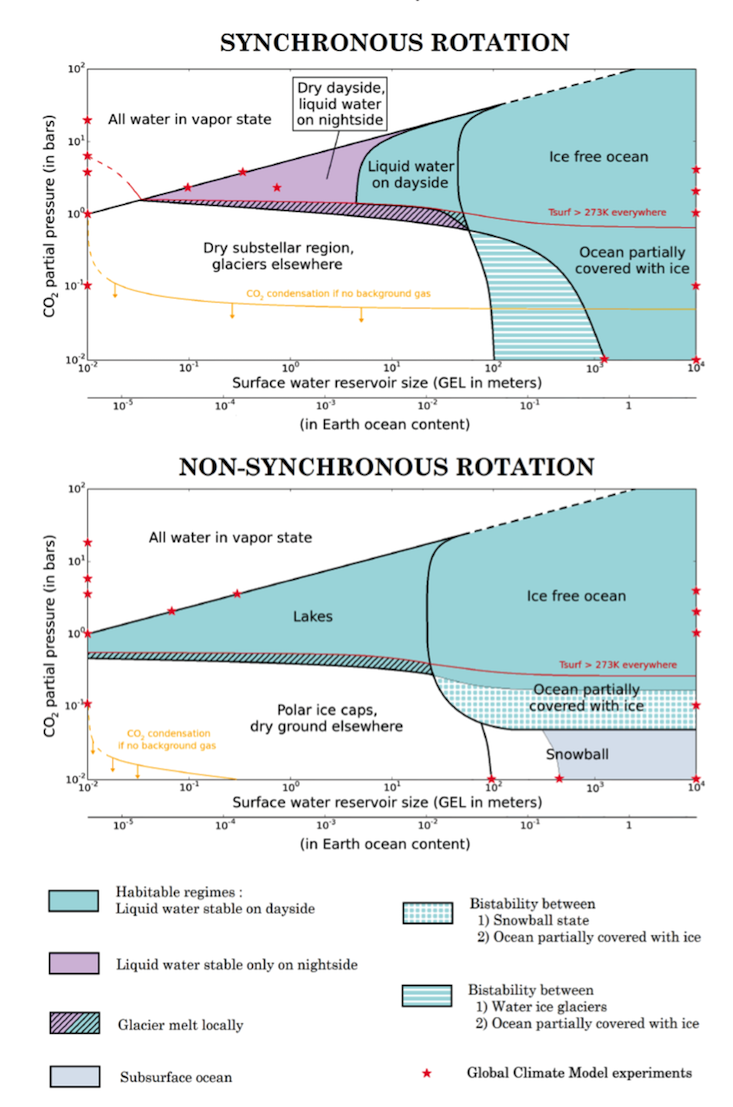 Not the answer you're looking for? Browse other questions tagged planets climate extreme-terrain or ask your own question.

21
Dumbbell planet - how would humans cross the bridge?
10
How Might I Design Mountains for My Tidally Locked Planet?
20
At what minimal technological level would the inhabitants of a binary planet system need to be to communicate with each other effectively?
6
Please help me calculate acceptable planet sizes & eclipse shadows cast by my binary planet system
7
Spotlight distribution in a hollow earth?
4
Looking for a review of my tidally locked red dwarf planet system specs!
3
What (if anything) can cause a substantial and stable shift of the magnetic poles of a habitable planet away from its geographical ones?
1
Changes to water worlds to make them habitable
3
Climate on a slow spinning planet
20
How does a Game of Thrones-style hyperwinter occur?