Would a man have any chance againt knife wielding woman? [closed]

I have a very patriarchal human society set in sparsely populated frontier. Think of it as a cross between wild west and Afghanistan minus Abrahamic religions.

There is very little law enforcement and culture of guns and knifes and clan feuds.

One of the local customs is that if the man wants to marry a girl that isn't interested in him he could challenge her in a duel. Only he has to fight barehanded the woman gets a knife.

Is there a chance for the man to win this encounter?

The goal of this custom is to have man to have small but still realistic chance, so it will dissuade anyone beside the most crazy ones (who in other cases might decide to kidnap the girl).

Guns and knives are part of their tools and culture and you could expect that both sexes know how to use them.

reality-check combat martial-arts
Share
Improve this question
edited May 14 '17 at 19:54

The general rule for a fight involving short blades and no armor is that everyone involved is going to get sliced up, one way or another. As PipperChip said, knife fights are ugly.

Knives have low reach, but move very fast. A scared person with a knife is going to flail with it. That doesn't require any competence on their part, but it makes a dangerous and unpredictable defense, even against a skilled fighter with a comparable weapon. Without escape, placation, or outside assistance as options, I suspect these suitors are going to have a very bad time.

Consider how one might approach a desperate woman with a knife. Actually disarming her is highly risky -- you can mostly forget about fancy maneuvers, this is a death match not a duel, and the moment the suitor makes a grab she's going to instinctively go for his hand. He'll run a high risk of ending up maimed with nothing to show for it. In a frontier culture, infection and disability will be a profoundly scary consequence for a proud, violent young man of marrying years.

What's likely is that, if this custom was somehow set up, the fear of maiming will be worked into the ritual as a disturbing moral lesson. Men who hesitate or make weak grabs will get their hands hacked up, a symbolic castration if you want to get Freudian about it. It might become common wisdom that the best chance for the suitor is to roll the dice on a blind charge, with the hope of scaring or overwhelming his potential "bride" in one go by tackling her before she gets in more than a good slash or two on his raised arms.

If so, it becomes a test of manliness, endurance, and bravery -- and possibly a way for impoverished men of martial talent to advance socially, by forcing marriages with the daughters of wealthy patriarchs. The suitors that live may become a small, mistrusted group of nouveau riche, showing off their scars for years after the event.

I practice Historic European Martial Arts. While most historic documents seek to review a system of fighting, daggers are highlighted.

The unarmored man basically wants to be the crowned figure in the following drawing: 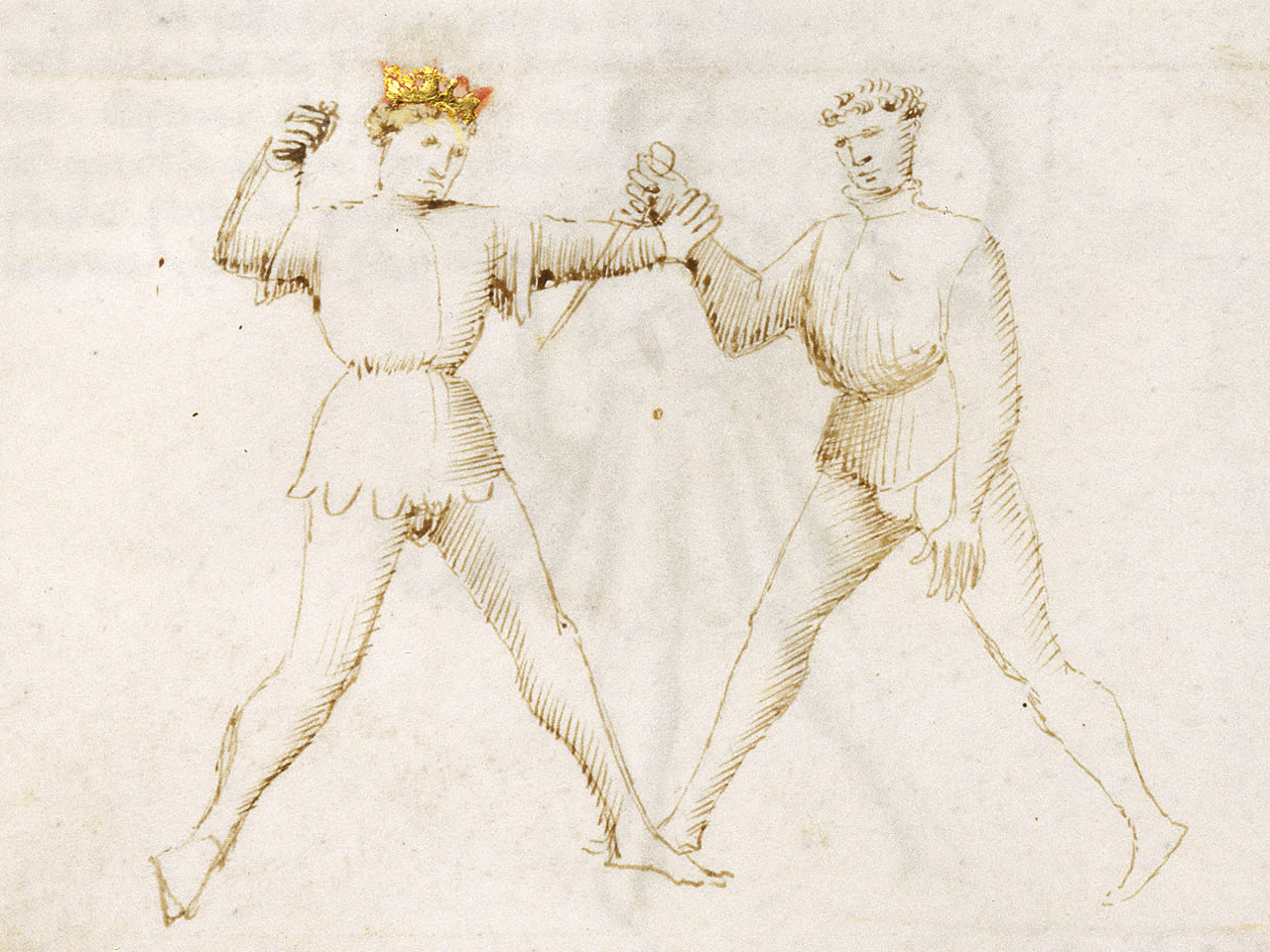 If the man can control the dagger, he stands a much larger chance of winning. Avoiding and countering these kinds of things is what medieval dagger is all about. Dagger fighting gets ugly very quickly! We're talking pins, twisted limbs, and broken fingers in addition to blood and holes in bodies.

The question of the dagger length and shape plays a role in this: a rondel will be used differently than a bowie knife, which will be yet again different than a steak knife. So here are my assumptions:

Seeing as they're both 'trained,' experience tells me to put my money on the woman with the dagger! I guess the woman's odds are 7/10 to 9/10 of winning.

The man is trying to subdue her, ideally doing as little harm as possible (because he's attracted to her, right?), and the woman can jump right to deadly force! Yes, the man may have some more reach and likely has more upper body strength, but as long as that dagger can move and the woman is smart about avoiding or breaking locks, the weapon wins.

I also expect a marked increase in the amount of wives killing husbands... this isn't a great foundation for a super-stable, happy marriage.

Sure the man would have a chance. Especially if he courted her or got her parents to convince her, and the duel was a pro forma demonstration of her submission to him, and separation from her parents.

To rephrase: if I want a knife-wielding expert to be my submissive wife, actual combat is going to be the last thing on my mind.

EDIT: what do men do now to get a woman who doesn't want him? Convince her that he's a good catch. Similarly, convince the knife-wielding girl that you aren't that bad.

The man has a pretty good chance to win this fight. There are various self-defense techniques to quickly disarm a knife-wielding attacker while being unarmed yourself. Here is an example from Krav Maga, but other unarmed martial arts over the course of history had similar techniques:

A very skilled knife-fighter might know how to counter such techniques, but unless knife-fighting is a skill women in your culture are expected to be proficient in, very few would be well-trained enough to do that, especially against an opponent with superior upper body strength.

Keep in mind that when it comes to preparation, the instigator of a duel has an unfair advantage. They can train as long as they want, and not announce their challenge until they feel ready. The challenged then only has until the duel to catch up with training. So unless you want any halfway decent fighter who comes around to snatch your daughters, you better keep training them in knife combat as soon as they can hold one.

By the way, you described your culture as "very patriarchal". Such a custom would then be very out-of-character. In the patriarchal mindset, men are considered the guardians of the women in their family. If there is something like trial-by-combat for marriage, a patriarchal society wouldn't have the woman herself fight. They would expect her father, husband or brother to fight for her. The only situation where a patriarchal society might expect a woman to fight for herself in a sanctioned duel is if no male relative of her is available.

There are so many variables here. Size of the opponents, skill with blade or unarmed combat, reach, the type of knife, clothing, agility.

It is indeed possible for an unarmed opponent to defeat a knife-wielding one, especially when there is no element of surprise.

I have worked in Corrections and know well how this one plays out!

A random unarmed man vs a random woman with a knife, my money would be on the man actually. Imagine the man wildly charging you. Unless you are trained in martial arts, you wouldn't know what to do. You may swing the knife which may, say 10% of the time, cause an incapacitating injury. The other 90% of the time, the physically stronger fighter has knocked you down and it is over. I imagine some women in your setting are fitter than average and maybe practice with the knife. Those would of course be favorites against an untrained unfit man. Still, anything can happen. Unless one of the fighters is a martial arts expert, the odds will be close to 50/50, I would take the physically stronger fighter.

Not the answer you're looking for? Browse other questions tagged reality-check combat martial-arts .

10
How would martial arts specialize to take advantage of human sexuality-based musculoskeletal differences, especially in women?

5
How would paleolithic combat work in a world where you have instant, and permanent mastery when you hold any tool?
9
The Six-Billion Dollar Man: Oxygen. Do we have the technology?
4
The Six-Billion Dollar Man: Vision. Do we have the technology?
8
What single change would have given the best chance for Iraq to win the Iraq War?
6
How many years should the transformation from woman to man take?
3
What would the fighting style of someone wielding a longsword-like arm blade look like?