It's been a couple of thousand years since humanity bombed itself back to the stone age. Most places are now safe to travel through but there's barely any sign of the old cities, new ones have sprung up in their place. The population is recovering, the forests are being cut for fuel and ship building, people are moving to the cities as the nobility starts claiming common land as their own. Much the same circumstances that drove the original industrial revolution.

There are geological constraints to the industrial revolution, a limited number of places in which it could have taken place. South Wales being one of them as coal and iron ore were found close to each other and close to the surface.

But can it come full circle or have we mined out too many of the accessible resources? If it could happen, where would it happen? Have we as the existing generation left any regions with accessible ore and coal where it was, for example, politically difficult to extract.

Time period chosen such that:

The Industrial Revolution was the transition to new manufacturing processes in the period from about 1760 to sometime between 1820 and 1840.

Coal production didn't really kick off until the 1860s or later. I can't find a suitable time graph for the United Kingdom, but for the US here is a chart of energy consumption over time.

Notice that coal production is close to zero until 1840 or later. However, in the US notice that Robert Fulton's steamboat made its first trip in 1807, and the first common carrier, steam driven railroad opened in 1830 (thought it wasn't very long).

As for steel, here is chart of UK steel production by year. 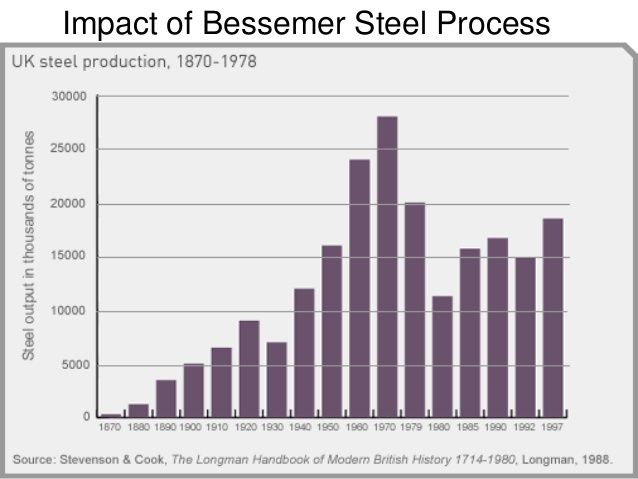 In conclusion, the industries that required heavy mining output developed AFTER the Industrial Revolution.

What did happen during the industrial revolution?

To sum up the 'Important techonlogical developments' bullets from Wikipedia, here are the things that did happen during the industrial revolution, most of which would be unaffected by the lack of accessible minerals.

While development of large scale industry after 1860 would be severely limited by access to coal and steel, many of the developments that made up the industrial revolution would be possible without it. Textiles, canals, chemistry, machine tools, and especially improved agriculture would provide much of the needed developments.

It is important to notice that all the required developments for later electric technologies are there. Concrete, waterwheels, and machine tools are all that is needed to build hydroelectric dams. Once electricity is properly investigated, this post-apocalyptic civilization could proceed directly from the Industrial Revolution to electric powered society, skipping over the heavy iron and steel usage.

The most accessible places for iron and other metals in your scenario would be, very likely, car dump sites. There it will be possible to fairly easily harvest rusted iron.

Add a surface coal mine or a forest in the surrounding and you can have some sort of metallurgy.

I am however afraid that large scale and not too challenging mining sites are practically exausted, so starting over the positive feedback between techonogly and mining will be more difficult or even impossible.

Not the answer you're looking for? Browse other questions tagged society technology post-apocalypse industrial-age .

4
How many years would it take to reach an industrial revolution level of life from scratch?
5
Impact of living on a world with no terrestrial fauna
3
What would an Industrial Revolution that never exploited fossil fuels look like?