What kinds of abstract colors, shapes, and other compositional elements could be used to indicate various emotions?

My story features an artificial intelligence that’s embodied in an industrial practical body design, not a humaniform body. The head is an ellipsoid with a grey zone for the eye region. It resembles a motorcycle helmet, with the visor part covering sensory apparatus, and the rest of it — what would cover the mouth and cheeks of a human — is a display surface.

As I’ve mentioned before, the manufacturer doesn’t want to ship a creepy and potentially dangerous psychopath, right? So they will arrange the expression of “feelings” to be an honest and a reliable indication of the AI’s motives and understanding, on a subconscious level that it can’t override.

In this particular design, the emotions are shown as patterns on the “face” comprised of the display surface. I’m thinking along the same lines as the icons assigned people who have not specified an image here on SE, which are automatically generated from a seed and are varied and unique.

The general appearance should make sence to humans, in an intuative poetic way. Furthermore, the different design elements should be able to be combined to reflect mixed states. For example, a background color is clearly orthogonal to a set of lines, and the lines can be straight and even, wavy, or jagged.

I’d like to include descriptions of the display as a unique “colorful” part of the story.

Joe’s helm bore irregular jagged red lines in front (where the mouth would be if a human head were under the helmet), and the sides blushed with foggy patches of bright red and dark blue. Although I hated to disturb him in such a mood, I had to deal with the issue quickly. Obviously, he’d already heard the news. …

Rather than just making up evocative images willy-nilly, I think I should have some general schema in mind first.

Would you suggest some mappings between graphical design elements and specific emotions or states of mind? And, how can these be combined, if they are not independent types of features?

Note: the screen is not going to show Emoticons or any coherent pictures including character glyphs or photos.

You want something that represents emotion but not to try to make expressions too realistic (be wary of the uncanny valley).

One problem may be cultural associations. Colours, as were mentioned in the comments, are pretty good but do vary based on cultural background.

Shapes, however, can represent facial expressions - like emoticons in text :) - but also have a general trend of crossing cultural boundaries (see the bouba/kiki effect see below). Sharpness is associated with negative emotions, roundness with content or happiness. The speed of motion could also be translated into agitation, excitement or depression and reluctance.

The picture above shows an example of two shapes used in the study of the bouba/kiki effect. If you attempt to attach a name, bouba or kiki to those shapes you will probably choose the softer sounding "bouba" to the round shape and the "kiki" will be the sharp edged shape. This effect is far from limited to soft and round shapes.

Interestingly it was found:

Given that autism is "characterized by impaired social interaction, verbal and non-verbal communication" we may be able to infer that this could be considered a form of body language.

Since emotion and face recognition is deeply coded in our brains while learning an abstract code would require proper training, a good solution can be to have the screen on the visor displaying emoticons or even human faces representing the wished emotion.

As a bonus you can customize it to "local" faces and/or to a given gender to further increase the acceptance.

As has been mentioned in the comments the use of colour alone may not be a good indicator as different colours have different connotations depending on the culture.

Since you want a somewhat complicated pattern what if the mood was indicated by the feeling of the picture. Brighter colours is a stronger feeling, so anger or happiness is bright whereas sadness would probably be dull colours.
A pleasing image (symmetrical, rounded edges maybe) is a positive emotion whereas a more jarring unpleasant image represents negative emotions (sharp edges and irregularity is anger).

There would definitely still be a potential for misunderstanding, but this is going to be true of any method of communicating. In the UK (and most Western countries as far as I know) everyone knows nodding your head is yes and shaking it is no, but other cultures have different meanings for these actions.
Basic emotional responses (blushing say) should be fairly universal for people, but there are still some people who (for whatever reason) don't understand or pick up on these cues, so it should be expected that not everyone can correctly interpret your AI's emotional state.

A lot of these answers talk about how colors and shapes can mean different things based on region.

But if it's a standard schema across all robots, then that doesn't matter as much, because people will learn what that means.

If I'm from the US and go traveling through Europe and Asia, I don't want the schema to change because then I won't know if the robot is happy or about to blow its circuits.

You can try to make the schema as culture neutral as possible, possibly by using imagery that is not as abstract.

Fire is hot everywhere, and it looks the same everywhere. If the robot is getting mad then imagery that invokes thoughts of fire would apply everywhere.

The sun is warm and happy. There is a theory I've read that the human smile is an imitation of looking at the sun.
Images that invoke thoughts of the sun could show happiness.

Falling water, like rain and tears, is generally associated with sadness, and so could be used.

The idea is that these robots would have their own emotional queues, and people would learn what they mean, so long as they mean the same thing everywhere.

Human sadness looks the same everywhere in all cultures, so it should be that way for robots too.

I'm picturing a full color oscilloscope screen. Different colors represent different categories of emotion. Red would be the joyful/angry and the smoothness or jaggedness of the circle would indicate the positive or negative aspects. The thickness and/or number of traces of that color would indicate intensity. So, a thin red trace with one or two points, would indicate a mild annoyance that just isn't worth dealing with and multiple smooth red curving shapes indicating extreme joy. You could have multiple colors displayed at once for complex displays of emotion. This would get around the East/West issues with the color Red. If the jaggies show up on one area of the loop, you might be able to tell which person in a group caused it. So, if you're telling it bad puns, that jag is pointing at you.

Whatever scheme you pick will likely be difficult for adults to learn but any children growing up with robots will find it natural and get more detail from the display.

There are links between colour and psychological response, it is possible (as the site shows) to build several personality types from an array of colours.

The studies (below and linked) were carried out to test the Wright theory of colour which underpins the whole thing. 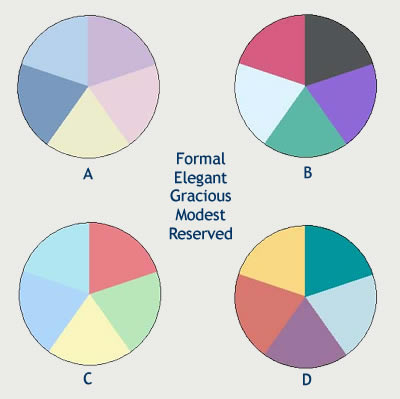 The results were remarkable - achieving 77% overall agreement with the Wright Theory, and over 90% agreement in places. However, perhaps the most striking discovery from this project was the remarkable level of agreement among all observers - reaching over 92% in places - demonstrating that response to colour is not as dependent on age, gender or culture as was previously thought.

Whether the a screen contains shapes or not (your prerogative, it could even just be strip lighting) the colours used could influence the impression the user gathers from interaction. Much like body language this would be a method of non-verbal communication available to the robot.

Well, I explain my answer with an example. I think you should use a pattern of semi-alphabetic colored lines or splotches and so on. An example of where something like this is used is the sequels to Arthur C. Clarke's Rendezvous with Rama. The Octospiders use colored lines that run across the sides of their head to express emotions, words, and various other things.

As far as colors themselves go, there are some cultural boundaries, but studies have shown that blue is sad, red is angry, green is happy, amber is cautious or suspicious, and so on.

I wonder why you would want to use an abstraction on a humanoid face. It is freaky. Humans are hardwired to see and interpret facial features.

You should use facial features. But I can imagine the frownbot / smileyface look provides little narrative opportunity.

Instead, sample faces from movies. The entire human emotional range has been depicted in the movies, up close, thousands of times. The face of the robot would show the face of an actor emoting appropriately. I like the idea that some of these clips would be recognizable to the person seeing them and some not.

You could also have the AI play music attuned to its mood. Music is more culturally specific than faces but still well matched to various emotional states. Plus this would lend itself to the movie version.

I worry this scheme will underuse the wealth of romantic faces / music but maybe your AIs get romantic too.

ADDENDUM It looks like by @Dlugosz comments my answer was misunderstood. From the OP

"The head is an ellipsoid with a grey zone for the eye region. It resembles a motorcycle helmet, with the visor part covering sensory apparatus, and the rest of it — what would cover the mouth and cheeks of a human — is a display surface." 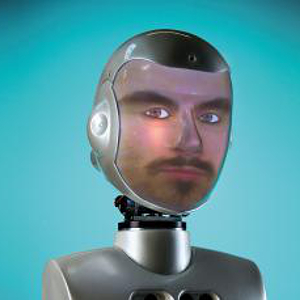 "...embodied in an industrial practical body design, not a humaniform body."

Why not have just one light indicating mood? That's how computers and servers work right now.

I can look at a machine and know all sorts of basic things from the lights, if a hard drive is online, if a hard drive is faulty, if a mb has an issue, if it's the front or the back, if the wifi is on or off, if the network cable is sending and recieving etc. So the colour of the lights tell me something, the speed it's blinking or not blinking tells me something etc.,

Seems much more logical to have one or 2 lights indicate this rather a pattern. The picture illustrates a range, it doesn't matter what the colour is so long as it's easy to see. Anything more is overkill and therefore bad engineering design.

Not the answer you're looking for? Browse other questions tagged language artificial-intelligence psychology or ask your own question.

1
Can AI learn human emotion from scratch as they live work close to human being, providing it has state of the art technology?

37
For designing a vocal language for an intelligent species, how to decide on phonemes?
9
Does intelligence necessarily lead to an abstract language?
3
Abstract conversation on an interspecies level
9
Nomenclature for software beings
15
Alternative to writing for creatures without eyesight?
3
Psychological causes for insomnia
5
What would be the consequences of a proto-human species that could generalize but not abstract well?
8
Are there alternative ways aliens would think and feel emotions?