Is there an impact event scenario where vegetation could survive on the surface but humanity would not?

I am working on a scenario that begins with an impact event. I have multiple questions, but I'll start with the catalyst for this world.

Is there a type of impact event that would not be a global killer, but basically poison the air, forcing humanity to live in shelters for a few years, while allowing vegetation to (at least some degree) survive?

The World: The world I am creating forces humanity into shelters, where they can resurface in a few years in protective gear, leaving behind a, still vegetated, but drought-like surface. I'd like a realistic scenario to allow for this, ideally stemming from an impact event. 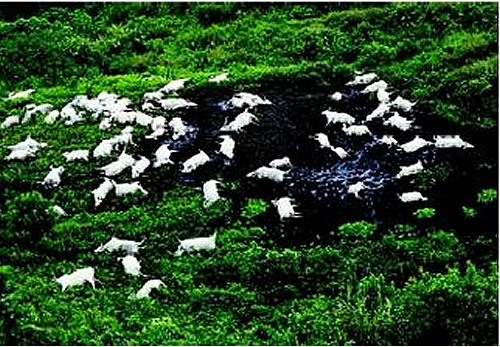 A pocket of magma lies beneath the lake and leaks carbon dioxide (CO2) into the water, changing it into carbonic acid. Nyos is one of only three known exploding lakes to be saturated with carbon dioxide in this way, the others being Lake Monoun, also in Cameroon, and Lake Kivu in Democratic Republic of Congo.

In 1986, possibly as the result of a landslide, Lake Nyos suddenly emitted a large cloud of CO2, which suffocated 1,746 people[2] and 3,500 livestock in nearby towns and villages.[3][4] Though not completely unprecedented, it was the first known large-scale asphyxiation caused by a natural event.

The premise for your event: it turns out the climate change deniers were right. Rising CO2 was not man made but due to a gradual, colossal outgassing of CO2 at one site at the bottom of the ocean. Like Lake Nyos, immense amounts of CO2 accumulate. When the meteor hits that area, the water outgasses and a Nyos-like "cloud of doom" rolls over the earth. Animals suffocate. Plants chortle merrily, replete in delicious CO2 and loads of nitrogenous fertilizer. Not only do they survive, they thrive.

Some humans make use of tunnels and other CO2 free air to survive and ride out the trouble.

I am struggling some to figure out how to make this last years. The Lake Nyos event lasted a couple of hours tops. CO2 can definitely kill you and you could throw in a fair proportion of CO which kills you better. But a continued outgassing from some secret source so as to keep the surface uninhabitable strains my credulity.

You could have the CO2 arrive from space - a giant frozen dry ice meteor. A lot. Most of it would sublimate away on entering the atmosphere, creating the "cloud of doom" - a really big meteor but not a really big impact. The rest would turn to gas from the heat of the impact. You could have enough CO2 arrive that it would take a long time to disperse.

CO2 is also good because it is not cyanide or something immediately deadly. It is more interesting and offers more story opportunities to have the atmosphere be bad but not outright lethal - people who had to venture outside would feel sick and hyperventilate as their CO2 level rose and pH fell. The plants would not just survive - many would thrive. Also, there is plenty written about what other things would happen with high CO2 - icecaps melt, poison ivy takes over etc. All of that stuff would happen in fast forward. Humans would emerge into a green, hot, wet, itchy world.

The meteor could hit the yellow stone national park volcano, trigger a huge ash cloud. The ensuing fire and loss of sunlight (plants dont like darkness for extended periods of time, or so I am being told) could be enough to create on other continents a poisonous atmosphere.
Fires, created via looting, and burning oil reserves will increase the ashcloud density and size as well as the C02 concentration.

Not the answer you're looking for? Browse other questions tagged science-based post-apocalypse or ask your own question.

26
How would societies be if created and populated only by young people?
47
Could humanity survive the sun going dark?
1
Where could Humanity live on Earth had LA Apocalypse not been resolved?
1
Post apocalyptic science based story
2
What could be an event which would wipe out most life on Earth and cause massive changes to Earth's ecology, but which humans can survive in bunkers?
1
How severe a multiple personality disorder can I impose on all inhabitants of a world without overt risk of a failed state?