Creating a “Zelda: Breath of the Wild”–style topographic map?

One of my favourite aspects of world building is creating maps and I've done a few in various styles over the years ranging from traditional hand drawn style fantasy maps to more realistic satellite style terrain maps.

But the style of map I've always loved is a topographic map where a contour line marks a change in height (usually at a set interval). Close together lines mean steep slopes while wide spaces with no lines mean flat ground. It's often combined with colour gradients as well.
Having played Breath of the Wild a lot lately I'm even more enamoured with this style of map as it's both very readable and looks great.

Yet I've never been able to find a good tutorial for how to do it or a program to make them.

So my question is, does anyone know of a good tutorial to make a realistic looking topographic map or a program that could do the same?

What kind of detail do you need, and what sort of tools do you plan on using?

I've made many faux-topological maps for tabletop campaigns and the like. The procedure is rather simple, depending on how "accurate" you want the map to be.

The simplest system I've found is to draw out a plain version of your map; post points of interest (cities, wells, police stations, demon portals, whwever) and draw any lakes you plan on having. If a point of interest requires a river, draw a blue dot where the river should flow.

Next, figure out the highest points on your map; mountain peaks or hills. Draw a dot for peaks or a circle for hilltops.

Then you step up from lakes and down from hilltops. Visualize the land around these features and draw the first ring of the topographic map. In you're making it all up, add a little squiggle variety at random. It's an iterative process; you're building UP land from lakes and DOWN land from hilltops and mountain tops.

There will come a point where you've filled in all the gaps between hills and lakes; you then draw rivers following the contour lines you've made

But I already have a map and I want to use a computer!

OK; if your map has a gradient of color or tone from mountain top to valley showing the altitude, it's pretty easy. Use the "Posterize" tool to reduce the number of colors and tones on you map to some reduced number, depending on the number of countours you want on your map. If you want 16 countour lines from mountain peak to lowest point, posterize to 16 colors. The map will be decomposed to 16 swatches, and your contour lines should be drawn on the boundaries between colors.

I would suggest using a vector art program. There are many that exist, but I use Inkscape because it's powerful and free. Here are two examples that I made with Inkscape (one map styled like your Zelda map, the other using a more "abstract" style that I like):

There are two types of images, vector and bitmap. While both have their uses, vector is better here, mainly because it looks good at any size: 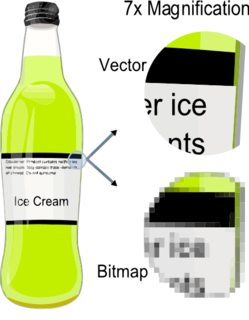 If you need a bitmap, you can easily create one from the vector drawing, but not the other way around.

Conversion vs. From Scratch

If you have an existing map, you may be able to convert it to a vector drawing by posterizing it—as Zoey suggests in another answer. You can follow this tutorial if you're working in Inkscape.

If you are making it from scratch, there are a lot of tutorials out there that can help. It's basically just a lot of putting down lines, duplicating shapes, and fiddling with the points. It's pretty easy to get started, and if you have any questions about how to do something, you can ask on the Graphic Design site.

Not the answer you're looking for? Browse other questions tagged worldbuilding-process worldbuilding-resources map-making software-recommendations or ask your own question.