Could the entire world have been destroyed by the existing nuclear arsenal in 1962?

Edited question a bit:
Considering the nuclear arsenal that existed in 1962 during the Cuban Missile Crisis, could it have destroyed all life on the surface of the world, following the events below?

27 October, 1962. The Cuban Missile Crisis is at its peak, the USS Beale dropped depth charges on a Russian submarine below it, the B-59. Unbeknownst to the US, this submarine contained a nuclear missile of 15kt. Running out of air, the three Russian officers bickered amongst themselves what to do, and in the end unanimously decided on launching the nuclear missile at the USS Randolf, a giant aircraft carrier. The US then probably would’ve quickly invaded Cuba to neutralise the Russian missiles stationed there, as was already suggested by the Joint Chiefs, before the Russians could prepare the missiles for launch. Although there were short range nuclear missiles on Cuba for exactly such an attempt, and the approaching US forces would have been decimated by these short range missiles. Then the US would most likely retaliate again by just dropping nuclear bombs on Cuba using the Air Force Bombers that were already in the air.

Following this is retaliation after retaliation until there were no bombs left or until bombs couldn't be launched anymore.

So considering the powers that held the nuclear weapons, mostly the US and USSR (and a couple European countries), would their squabble destroy all life on the surface of the world?

I'd imagine that neither the US and USSR or any of the European countries had any interest in throwing a nuke at, for example, New Zealand.

Edit: After reading all the comments and answers going in the direction of how to kill all life on earth, that was not my intention. I only wanted to know if, back then, the amount of nuclear warheads that existed would have killed all/most life on earth - which was actually not what I wanted.

I am building a post nuclear war world that escalated from the Cold War, with a destroyed surface, but capable of rebuilding a society (fairly) quickly. Thanks to a couple answers I now know that the southern hemisphere would be less affected, giving me many great ideas.

Apologies for the lack of motive behind this question that got some people going in an unintended direction!

At this stage, Russia did not have a huge nuclear stockpile: 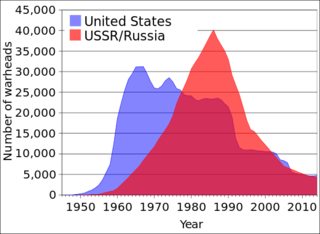 Furthermore, the first ICBMs had only been around since c. 1959. So basically this represents the last point in the Cold War where the USA could reasonably expect to survive a nuclear exchange with the USSR in some shape or form. Remember that the vast majority of weapons were still dropped by bombers, and it's not clear how many USSR bombers would have gotten through at this stage.

The USA get perhaps 50-100 nuke hits, many off-target. There's a lot of fallout, but not civilization-ending. The USSR might get over 1000 (The USA stockpile is much bigger) and be wiped out as a country; a Warsaw pact invasion through the Fulda Gap and North German Plain is stopped with the extensive use of nuclear landmines and shells; no doubt nukes also hit the UK and France. Western Europe comes off very badly. Eastern European forces rebel against the Soviets, probably with success. China sits it out.

Nuclear winter is not really a 'thing' at this stage, there are just not enough missiles. Indeed, it never gets worse than a Mount Pinatubo-style eruption. Fallout is dangerous locally for for a month or two regionally—but radiation dangers are frequently overstated. Your risk of cancer may increase by a factor of 10, but will you notice as you struggle to find enough food to eat?

Fast forward 5-10 years and the results are very different—both the USA and USSR become nuclear wastelands. Even so, it's mostly a northern hemisphere thing, no one is going to bother wasting nukes on most of Africa, or India, or much of South America.

The world is a sphere of rock and metal, and nothing that humanity can do or is ever likely to be able to do will have any significant effect on its continued existence. There's a thin film of volatiles on the surface, and some interesting emergent systems of complex chemicals mixed in with those volatiles, and we could probably have a significant effect on those, but it's only a tiny tiny part of the world.

Adding to this answer to cover the edited question, the answer is still no. Bacteria are incredibly tough, diverse and versatile, and it's not within our capacity to kill them all. Even if we did, sub-surface bacteria would very quickly recolonise the surface.

Distinguishing between destroying the world and merely killing everyone on it.

In short, yes there were certainly enough nukes to kill everyone several times over.

Q. How many tons of TNT equivalent do all the nuclear weapons in the world add up to, per person? [...]

A.Governments do not reveal how many megatons (the equivalent of a million tons of TNT) they have, but fairly recently the International Institute of Strategic Studies in London estimated the total megatonnage of the United States and the Soviet Union at approximately 10,000. The population of the world is about 4.7 billion. Setting aside the comparatively trivial megatonnage of the smaller nuclear powers and dividing the 10 billion tons by the 4.7 billion people yields about 2.1 tons, or 4,200 pounds of TNT equivalent for every man, woman and child on earth. [...] In 1960, it has been estimated, the world total was about 30,000 megatons, though you may feel that 2.1 tons per person is still plenty.

After this simple consideration, you need to ask the questions about where these weapons were targetted. Would everyone have been killed or would, say, Africa and South America have been left largely untouched by the direct exchanges. A lot of the cold war targetting data has now been declassified and is available on the web so you can see whether your home would have been on somebody's list.

The comments are questioning whether this is a viable way to explain how many warheads were available. It's not, it's a political way to challenge the stupid numbers of warheads that were available, used by anti-nuclear protesters for decades.

Comments are also saying that Russia didn't have so many warheads, they didn't, not as many as the US anyway.

Plot those two on a graph together and no, it doesn't look so good for Russia, but think about what those numbers really mean. Each warhead is a city killer. Maybe 3 warheads for a very large city, many were later stacked in MIRVs anyway so that's already 3-14 as a cluster.

The US only has 300 cities with a population over 100,000. How many nukes do you really need to effectively wipe out that population? Sure there'll be a few survivors here and there, but the job is effectively done, the fallout and firestorms can do the rest.

Sure you're going to have trouble killing off every last African tribesman but that's not to say it's impossible, the bigger question is would anyone have actually fired anything at them, to which the answer is no. There would most likely be a lot of survivors in the southern hemisphere even after a major exchange, but not many in the north.

The nuclear arms race was entirely political, very expensive, and completely pointless. The idea was to bankrupt the Russian economy by challenging them to keep up, not actually create an effective military arsenal (spoiler: it worked).

I'm torn between leaving you with a cheerful note from Flanders and Swann or Tom Lehrer on this, so you get both.

The whole arsenal could not cover the whole world. But what would be devastating are the radioactive clouds. So even if New Zealand or Australia wouldn't be nuked the air and water would sooner or later travel there and poison everything.

Such case is talked in the novel

On the Beach by Nevil Shute

Atmospheric and ground atomic tests in the '60s were conducted on a rather small scale, exploding one bomb at a time. Nevertheless they had a global impact, by spreading radioctive nuclides on large areas thanks to atmospheric circulation. See the increase in atmospheric C14 content or the incident of Daigo Fukuryu Maru.

Basically the impact of an atomic bombardment is heavy locally, due to fireball and air blast, but the combined effect of dust launched on the upper atmosphere and radioactive nuclides spread by atmospheric circulation does not limit the damage to a small area.

Expecially the dust, shielding solar radiation, will have as a consequence the notorius nuclear winter on a planet scale, New Zealand (or whatever country untouched by nukes) included. Chernobyl shows us that plants and animals can manage to survive a nuclear incident, but we didn't have a nuclear winter in that case.

Not the answer you're looking for? Browse other questions tagged alternate-history apocalypse post-apocalypse nuclear .

25
Is it safe to grow and eat food on post-nuclear-war land?
1
What would the world be like today if a nuclear winter started in the 60's?

5
Preparing for Absolute Certainty of a Nuclear War
3
Nuking all the ice
25
Is it safe to grow and eat food on post-nuclear-war land?
4
If the US launched air strikes against Cuba during the Cuban Missile Crisis, would any Soviet missile sites be able to survive?
2
Plausible reason for why the government isn’t present
4
Could a group of scientists repair a truck to run on steam?
3
Military/Government Breakdown in Post-Apocalyptic USSR