Can a moon cycle accelerate periodically?

I've been looking for information on this, but I haven't come upon an answer that could actually help me figure this out:

Imagine a planet, inhabited by somewhat "human" beings, that has one sun-like star (a source of light and such) and two moons. Now, that "Sun" and one of the moons work in cycles kind of similar to ours, that being 15 hours of sunlight and 15 hours of night, during which, this moon appears in a roughly opposite cycle to that star.

Now, the second moon has played a crucial part in the disappearing of an ancient city, that being either floods or drought. It may not be directly related, but those living, sentient beings think there is a direct relation between that. The idea is that this moon used to appear during the night for centuries, only to keep changing its span and coming out slightly earlier everyday. The difference of the time it came out from day to day was so small it couldn't be noticed until it started appearing at, what we could call, midnight.

To keep it simple: this moon kept appearing earlier and earlier, and by the time it first came out at the same time their "Sun" did, a natural disaster came to that city.

This happened nearly 1000 years ago, and the theory states that "Every thousand years, this moon switches between day and night". Some of the people who got to abandon the city on time think they can still come back to it, because (they assure), since so many years have passed, the moon comes out at night again, and so, the place must be habitable again.

I'm terribly sorry if this makes no scientific sense at all, my knowledge on physics, planetology and English are quite not as good as I wish they were.

You don't need acceleration at all to see the effect you mention. In fact, our moon does exactly what you describe, only on a 28 day cycle instead of centuries. It's why sometimes you can see the moon during the day.

A highly eccentric orbit would indeed cause an acceleration. The Molniya orbit is a great example. These orbits are designed to reach an appogee over Russia while moving very slowly and then accelerate around the Earth to get back into position over Russia again. They're used for Russian communication satellites -- you only need 3 to guarantee that one is over Russia at any point in time! However, I don't know how well that particular orbit scales to the thousands of years that you want.

From the question it is not clear to me whether this moon made a sudden switch in its behavior or if its orbit gradually changed over 1000 years. The gradual is not so wacky I do not think. The sudden ""Every thousand years, this moon switches between day and night" requires more thinking.

I found that Saturn has two moons that switch position. From http://www.planetary.org/blogs/emily-lakdawalla/2006/janus-epimetheus-swap.html

An orbiting body with a period of 1000 years would have to be something like a comet. Comets take their time. From https://www.spaceanswers.com/solar-system/which-comet-takes-the-longest-to-orbit-the-sun/

A comet with a period of 1000 years would be hustling right along compared to these. Suppose the comet showed up and when it did, it played the role of Epimetheus, altering the orbit of the second day/night moon then zooming off for another 1000 year circuit before returning and altering it back.

It sounds like having your evil moon be an evil sibling planet instead would solve some of your orbital mechanics.

Problems with your moon

In order for a moon to only appear at night, it would need to constantly be on the opposite side of the sun, which would preclude it from orbiting the planet.

Note: You could account for this by having it orbit in the opposite direction of the planet's rotation in a geosynchronous orbit (not to be confused with a geostationary orbit) such that it appears in the same position at the same time each day for a ground based observer, and then limit your narrative only to people who live in an area on the planet where the moon is visible at night. (People on the other side of the planet would see the moon during the day, but perhaps they're irrelevant to your story.)

How a sibling planet would work

You still can't have another planet only appear at night, since the farther out you go from the sun, the longer a body will take to orbit the sun. Eventually any planet orbiting closer to the sun will "lap" an orbit farther out; which means that at some point, the sun and the other planet are guaranteed to be in the same general direction (from the first planet's perspective).

In order for a planet to appear on the nighttime side of another planet for 1000 years, the inner planet would need to "lap" the outer planet no more quickly than every 2000 years. Assuming concentricity, the evil sibling planet will necessarily spend more than 1000 years on the daytime side. 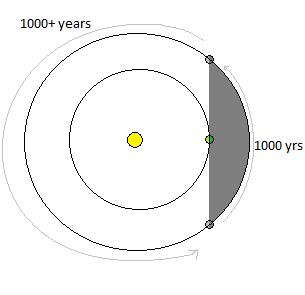 The biggest problem I can see is that the evil sibling planet would have the greatest gravitational effect during the 1000 years when it's visible at night.

During the 1000+ years when it's visible during the daytime, it will be more distant from the planet (at times it'll be on the complete opposite side of the sun) and while its gravitational influence will be cumulative with that of the sun, it will also be relatively minor due to the distance.

If the appearance of the planet during the day doesn't actually foretell any astrophysical destruction, and it's just idle superstition, then this approach works fine.

If you flip the scenario so that the evil planet appears at night and then causes destruction, it resolves a few problems.

First, with a concentric orbit, it can spend 1000 years harmlessly on the daytime side of the earth analog, then spend less than 1000 years buzzing by in a closer orbit.

Second, its greater proximity during the night period facilitates greater tidal extremes that can cause destruction befitting your plot device. 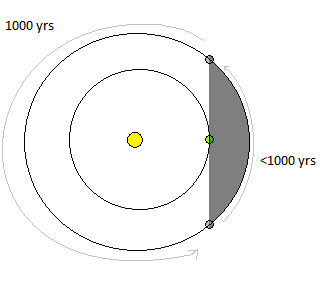 The closer you make the two planet's orbits, the shorter the period of time during which the evil sibling will appear at night and the greater you'll make the gravitational effects.

Sometimes these things are easier to model in two dimensions.

Not the answer you're looking for? Browse other questions tagged space moons stars or ask your own question.

22
Realistic sky of an Earth-like moon orbiting a gas giant (length of day and size of celestial bodies)
19
Earth-like Moon around the Gas Giant. Eclipse length?
2
Could a habitable tidally locked planet have a day and night cycle caused by the eccentricity of its orbit?
2
Is this habitable moon possible?
34
Can a radioactive moon affect life on a planet?
4
How does the day/night cycle work on a non-tidally locked moon?
3
Could this moon of a gas giant orbiting a neutron star support life?
3
Day/night cycle science help?
6
What are the day and night fluctuations for a moon orbiting a planet the size of Jupiter?
2
How to get a habitable moon without too long day-night cycle?