Could a genetically modified coral polyp be used as a pathogen?

Is this even remotely possible? 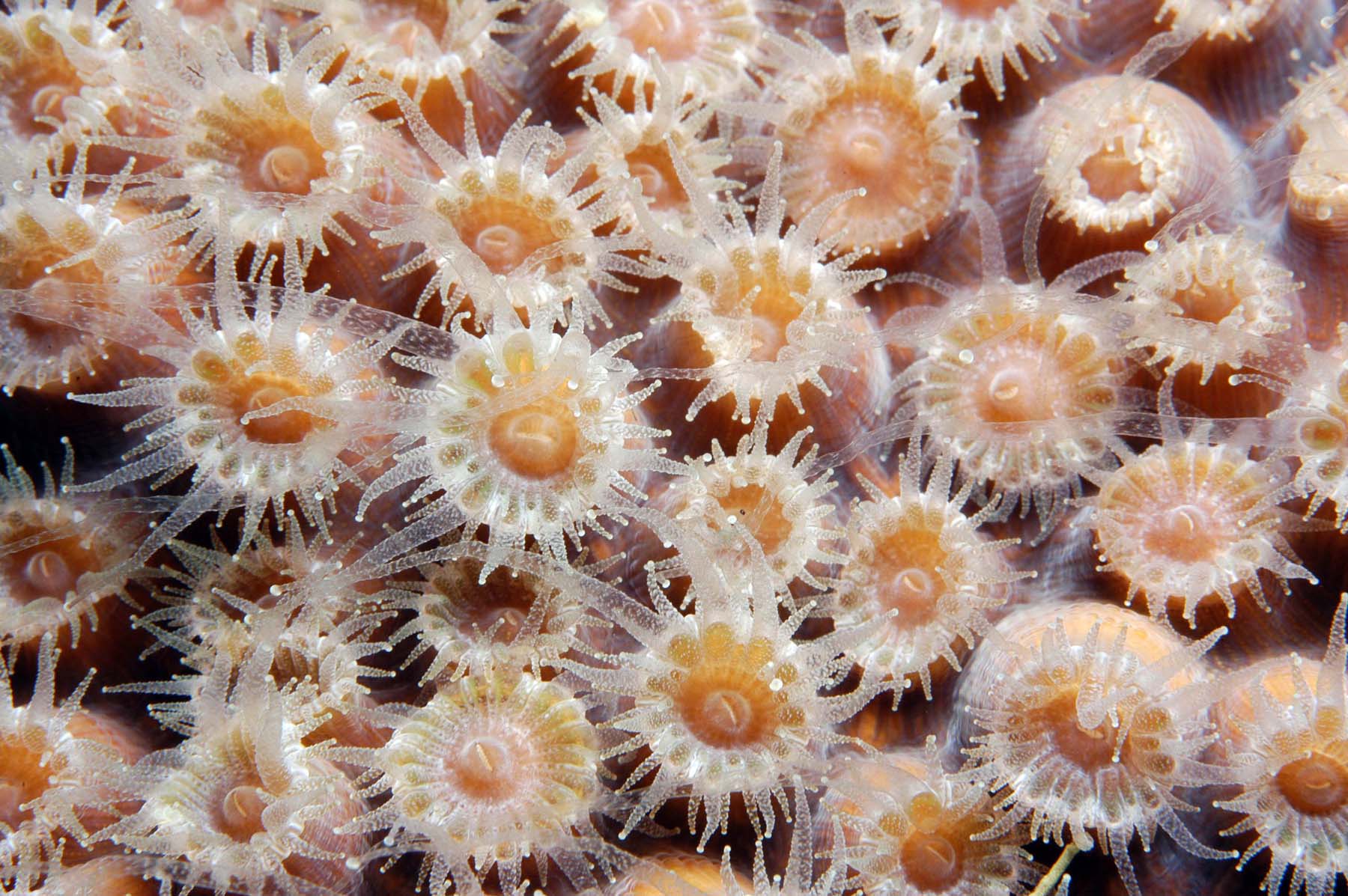 First of all, the Polyps don't really need to have an efficient way of spreading themselves, their helpful human friends from Evil Inc. will be assisting them with this. They therefore only need to be able to survive when injected directly into the human bloodstream, and be dramatic about it, if possible. It should eventually be lethal, as well: the more gruesome the death, the better!

To be strictly science based, I don't think this is likely. The reason has to do with the size of the coral's larval form, which is what I assume has to be injected into a person. A coral planula is in the 1mm range. Here is a study on Pocillopora damicornis where the planula are from 1.03-2.46 mm in length and .21-1.44 mm in width.

By comparison, going down a CDC list of common blood parasites, we see that Trypanosoma (chagas, sleeping sickness) that affect humans max out at about 30$\mu$m; Plasmodium (malaria) about 15 $\mu$m; Leishmania (Leishmaniasis) up to 14 $\mu$m.

So your blood parasites are 10 to 100 times smaller than your larval coral. Why does this matter? Well, small size allows these parasites strategies for evading white blood cells that are not available to larger creatures. Malaria hides out in red blood cells; Trypanosomes rely on rapid multiplication and mutation to develop an antigenic membrane that is resistant to white blood cells.

Being much larger, a planula won't have either of these options available to it. The human body does have specially designed white blood cells (Eosinopils) designed to attack larger parasites. These cells use a variety of highly reactive anioins like hydrobromite or peroxide to attack the cell membranes of larger parasites. If the parasite can't multiply and evolve quickly to resist the attacks of the host, it will be wiped out.

I was mistaken in identifying several worm-type parasites as gastro-intestinal parasites and ignoring them for this analysis. As @JDlugosz points out, the Schistosoma worms are larger; much larger than the coral polyps, infact. Schistosoma mansoni is around 1000 x 100 mm in size; which is not only larger than the planula but larger than some adult polyps as well.

That species of worm resists attack by white blood cells by coating its 'skin' with anti-oxidant proteins to protect it from the extremely reactive free radicals the body's defenses attack with.

So there is a precedent for larger organisms in the human bloodstream.

A family of seven living just south of Adelaide is in hospital because of suspected poisoning from spores released by coral from a household aquarium which was scrubbed with a cleaning brush.

Ambulance crews were called to the house on Sunday Parade at Aldinga Beach, about 2:30am, when the residents fell ill.

They were taken to Flinders Medical Centre and remain in a stable condition.

Decontamination crews have worked at the home throughout the day.

The Country Fire Service (CFS) and police were then called to the scene, which has been cordoned off.

The CFS said it traced the problem to the aquarium because of what the family members had said and the symptoms they were displaying — mainly breathing problems.

"Those two together [we] worked out that it was the spores [from the coral]," CFS regional officer Peter Phillips said.

"It would appear that in trying to clean the coral, they've taken it out of the aquarium and scrubbed it with a brush and that's liberated the spores."

To give an indication of how dangerous this situation was: --

"When people start cleaning their aquaria and damaging these flower corals that's when the toxicants are released," he said.

"For example if people have a cut in their hand or if there was one case of somebody cleaning their tank with boiling water and the toxins entered the water vapour, then the effects can be really harmful."

The mechanism employed by coral spores is explained thus:

"You can have desirable corals that are colourful and ones that are less colourful, so sometimes people decide to clean out the undesirable colours."

He said some of the most toxic coral was found in the zoanthids genus.

The toxin is called palytoxin (PTX) and can cause severe respiratory reaction, haemorrhaging and death to humans if ingested.

Mr Fullerton said he had known of a few aquaculture farmers who suffered bad reactions after being squirted in the eye by the juice of coral.

He recommended aquarium owners wear eye and hand protection when handling coral to ensure toxins were not transferred.

This means that there are coral genus that produce deadly toxins. If genetic modification is required, then it should be of a kind that enables the coral spores and organisms is expel their defensive poisons to attack people and other creatures that feed on the corals.

Assuming many more corals could be equipped with similar toxic defense mechanisms could make reefs into hazardous and lethal environments. The basic mechanisms are there, if they can adapted and transplanted into the majority of corals then this could achieve the result you want in making corals deadly. This may not be what you had in mind when you wanted to make corals pathogenic.

If a coral was going to become parasitic, it would probably be a "soft coral" without a calcite skeleton (these kinds of corals do exist). Kind of like a sea anemone (which are close relatives of corals), and there are actually are parasitic sea anemones. Losing the shell is something seen in a lot of parasites that evolve from hard-shelled organisms, like shipworms (which sort of parasitize ships) and Sacculina. Soft bodies means it's easier to wriggle around inside the host.

The big issue would be acidity. Human blood has a pH of 7.35-7.45. The average ocean pH today is 8.1, and prior to the industrial revolution was 8.2. That tiny little shift in pH is causing mass coral bleaching, where the single-celled symbiotes that allow corals to photosythesize are ditching the corals and the corals are having trouble building their calcium carbonate endoskeleton. Most organisms with a calcium carbonate skeleton aren't very active and it's been suggested that the variations in physiology associated with high activity (i.e., lactic acid) erode such skeletons, making calcium phosphate (like us) or chitin/chitin with calcium carbonate (mollusks, arthropods) a better bet. The problem your parasitic coral has to face is that it is getting calcium from an acidic, metabolically variable environment (human fluids).

Look at Schistosomiasis as a model. Basically make your polyps do everything the Schistosoma is described as doing, changing the parts you want specifically different.

It makes sense that the creators would model it after real pathogens that are large.

Not the answer you're looking for? Browse other questions tagged science-based biology diseases sea-creatures .