Would the US as a nation cease to exist if a nuclear terrorist attack struck it in 2018?

"So, a little thing that propped into my head was an interesting idea I had. So, let us say it is the year 2018, and a bunch of Iranian terrorists are able to smuggle a 40 kt nuclear device stolen from Pakistan (which fell into a civil war in late 2017 after anti-government protests turned violent). The device detonates, and all three branches of the Federal Government are completely destroyed, along with a total casualty estimate of 258,260."

How long could the US last as a political entity after the attack?

NOTE: By "last as a political entity", I mean if the States can avoid being balkanised into multiple independent states.

EDIT: To clarify on the details, here is a screenshot from NukeMap: 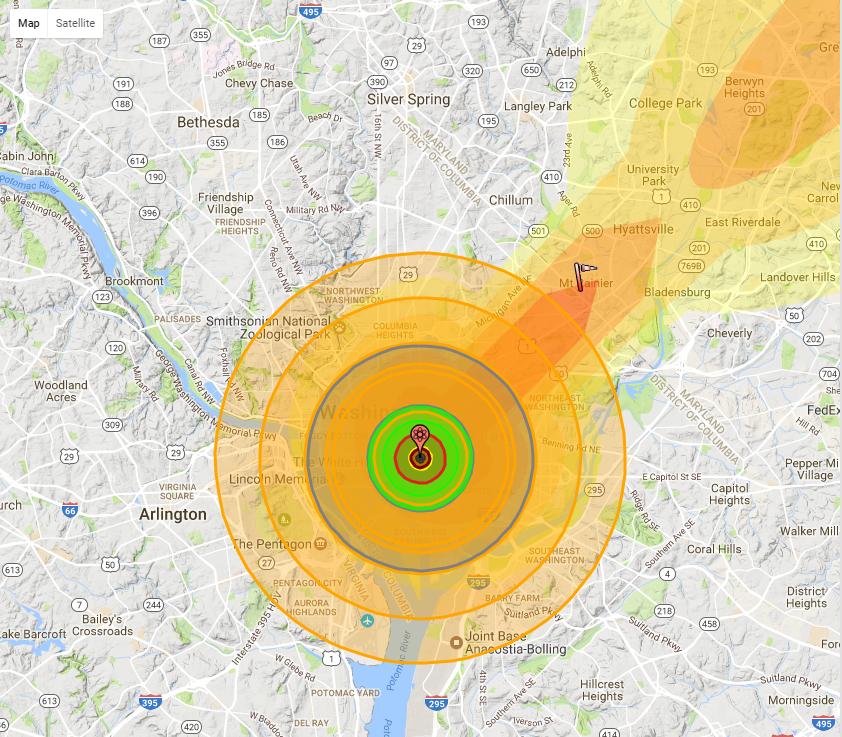 EDIT 2: I am adding two additional screenshots for the sake of information: 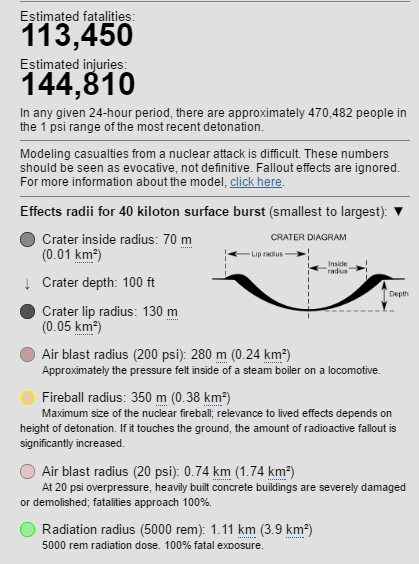 EDIT 3: The total estimate for the casualties amounts to both the dead and injured and only accounts for the initial losses.

EDIT 4: Oh and just in case, the screenshots all depict the extent of the damage after the explosion and also the initial body count and injured people. Oh and NOTE: This also accounts for the "advanced options" feature in NukeMap.

However long it takes for an empire to expire... That's about it.

The US Government structure is pretty decentralized as it is. If you have ever read the Constitution, it is a remarkably short document to establish the framework for a government. Most of the true power is supposed to reside with the States.

Your attack will do very little to the infrastructure. It won't even damage much of the monetary structure. The money lives in Delaware, New York, Texas and California.

Since the advent of the Internet, a lot of government agencies already back information up to places that are selected for geological and weather stability. These are usually long ways away from the capital and far outside the effect of the attack.

What it will do is slow down any current government shenanigans and force a series of special elections. In the meantime, I suspect a Handful of surviving politicos who may not have been in Washington will get with some generals to form an interim government, Elections will be held, a new government elected and established under the constitutional framework. A few years later and the only difference between the current corrupt political cesspit and the new capital will be the scenery.

The reasoning behind this is that all of our elected government officials, all of our military, officer and enlisted alike, and many others, take an oath to defend the Constitution. Not the current government, not the President, not Congress, not the courts, the Constitution. Of all of the Military men and women of my acquaintance (a lot) BELIEVE in the Constitution. I think that alone will minimize the chances of balkanization.

There is a lot of media play on various secession movements in the US, but the truth is that these movements are tiny. The make a fun 5 minute segment on the news, but there isn't anything more to them than that.

The other thing it WILL do is unite a lot of us against whatever organization launched the attack. By the time we get our stuff back together enough, we would probably begin doing our best to absolutely destroy the attackers. there is nothing like a sucker punch to unite all of us oddballs in the States.

At least as long as it would last without the attack. Or even longer.

Wiping out the Capitol and its surroundings while everyone including the president is around would be quite the blow. It would halt the federal government activity for months while cabinet and other positions are refilled and put up-to-date.

But it wouldn't destroy it. Consider it just a Major Inconvenience.

Also, the Union would not dissolve.
As much they like to grumble against the Federal, the States aren't a bunch of disparate states only held together by the Federal government force. They are together quite voluntarily. They won't separate just because the Fed is KO for a while.

And you gave them the most hurtful enemy the US ever had. If anything, that would unite them even more.

As I understand it, the entire line of succession is never all in one place; someone is always out of DC in an "undisclosed location" (the "Designated Survivor"). This is specifically to prevent this scenario from coming about; there will always be someone in a position to take the reins first as Acting President, then as President - who can then start arranging for the state governments to be contacted to appoint Senators to replace those killed in the attack, and to have them call special elections to replace Representatives similarly killed. While the mechanism is different, the scenario was essentially the same at the end of Tom Clancy's Debt of Honor and beginning of Executive Orders. Clancy has been known to do his homework thoroughly, so it's likely that the government would be able to reconstitute itself, and would likely have strong public support (recall the public reaction following the events of 11 September 2001, and 7 December 1941 (which I was reminded of by another StackExchanger)). Essentially, your scenario is anything but a nation-killer.

Actually, you dont need THAT much to politically and economically collapse a nation with a single nuclear device. Take, for example, Manhattan during peak hours. How many people are there during that time, in a lethal range of a 40kt warhead? 1.5 million inhabitants alone (2010 census), and probably more if you include people that come to work there. Its also an important economical center of the US.

Striking such point will generate millions of casualties that need rescue/care/support. Consider the effect that WTC had, where there were - comparably - very little immediate casualties. Add to that the fact, that you will be totally unable to provide even basic relief/support/health care to affected people. How many burn victims you will have? Several hundred thousands, very probably more. How many hospital beds does US have that can support the scale of injury that will be prevalent? Not enough. Can you provide transport ability / logistics to transport the casualties? You cannot. Not enough ambulances, and time. Not to mention area denial during first 2-3 days due to radiological effects. Social and political backslash would be enormous enough, not to mention any economic effects.

Really, you do not need a prompt decapitating strike against whole of government for country to collapse into chaos.

First, a slight suggestion - you have potentially grossly understated the casualties possible. If the strike is time to occur at noon during a presidential inauguration (for maximum literary effect, just as the president finishes his oath and shakes the Chief Justice's hand), you would kill the entire crowd. While the Trump inauguration was (relatively) sparsely attended, and only totalled on the order of 200,000, the first Obama inauguration pulled somewhere near 1.8 million.

Of course, while that is the best/worst case (depending on which side you're on) it also occurs during maximum security, so it's arguably the hardest time to pull it off successfully. On the gripping hand, it's anyone's guess if the security measures in place for an inauguration are geared up to preventing a nuke. There's lots of room for creativity here.

With that said, such an attack would have the immediate effect of drawing the country together on an unprecedented scale, and would make the post-Pearl Harbor and post-911 responses look like languid tea parties. As mentioned, the Designated Survivor policy would be in place, so at least one legitimate member in the chain of succession would be available. As a result, there would be little likelihood of a military assumption of power, either official or unofficial.

While it's true that the 3 branches would be pretty well decapitated, the actual damage to most of the country is minimal. Communications, for instance would be largely untouched, and the military would respond as it always has, with the Pentagon destruction providing slots to be filled almost instantly. And the loss of the Pentagon would only really affect the very top of the chain of command (the Joint Chiefs, especially) but most of the operational commanders (command, corps, divisional and below) would survive. I suspect most state governments would take a hit, since I expect most governors would be in Washington. And, since we're assuming a very popular president-elect (large crowds, remember?) you should presume most of Congress would be gone. While this would make passing laws to respond to the attack a bit difficult for several months, I suspect that temporary Executive Orders, plus laws on the books allowing emergency/wartime responses would be interpreted in favor of doing what needs to be done.

So, on to the question of the survival of the nation.

Well, it's pretty clear that the nation would survive (in the short run) just fine. One answer suggested that the inability to respond successfully to a mass casualty incident such as this would delegitimize the government by showing it to be inadequate. While I might be wrong, I suggest that this is just silly. While horrified, the rest of the nation would, I submit, recognize that there is pretty much no way to mount a successful response. There would be any number of individual errors which could be criticized post-mortem, but that sort of scale is simply beyond what any emergency plan can handle without required a monumental, sustained effort which would be grotesquely expensive and wasteful until it was needed.

What would happen, I think, is that the primacy of the Federal government would be greatly enhanced. This is a trend which has been in place since the needs of WWII followed by the Cold War, with the expansion of Federally-empowered rights/entitlements which have characterized the last 50 or so years. The country would effectively shift to a war footing, but without an easily-identified external enemy. Internal surveillance, already boosted enormously post-911, would really kick into high gear. Defense/security spending would rise dramatically, with most of the increase aimed at internal security. After all, we already have a WFS (Whole Freaking Shitload) of nuclear warheads, but we don't know who to send them to - unless some group is dumb enough to credibly claim credit for the attack. Shortly before they get hammered.

In many respects, these changes can be seen as an acceleration of trends already in place. Given this view the ultimate effect of such an attack would be to hasten the end of the nation, simply by speeding up the "natural" forces which should be assumed to one day drive us into decline.

7
Would geographical borders exist in a near-future world ruled by corporations instead of nation-states?
47
"Life post-Singularity", or "How to survive without Instagram"
8
How might an inter-planetary confederation turn into a highly centralized empire?
6
How many nukes can explode in the US without seriously affecting Canada?
6
What change in China's history after the Korean War is needed to made the Democratic movement in 1989 a success?
1
How can Hong Kong be brought into the Commonwealth of Nations?