Can a Vertebrate have an Assassin bug-like Proboscis?

One of the strangest and most effective weapons in the wonderful world of arthropods in the proboscis of the famed assassin bug, with even the head of the insect working as part of the weapon. 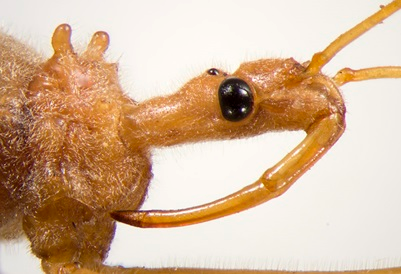 The "bite" of an assassin bug is a four step method. First, the bug impales the exoskeleton of its prey with its proboscis. They will then inject a venom that paralyzes the victim instantly before pumping it full of digestive fluids. Finally, the bug sucks up its meal.

This is obviously terrifying, it's the equivalent of a war pick on the face of an insect. Rather, it would be terrifying if it were even a slight threat. The problem here is their size. If they were larger, they would be a major threat, but alas, the square root law destroys this dream.

But, what if we just take the feature we want? Is it possible for a vertebrate to have a mouth in the style of the assassin bug? If so, how big can it become? If not, how close can we get?

If a creature evolves an appendage, the advantage this appendage provides needs to be substantial enough to push the evolution of that appendage to completion, eg. a tapir-type nose evolving to an elephant-style trunk as a very useful and multi-purpose breathing and manipulation digit.

A larger body needs energy in larger quantities and roughly more evenly to sustain that size. A proboscis can only suck in liquid substances, necessitating that the creature either feeds exclusively on liquids (like butterflies but you'd, umm, really need humungous amounts of tree sap or nectar to sustain a large-sized body) or liquefies its food using some kind of venom/enzymes (again, needs to liquefy large amounts of food to sustain itself, though not as much as simple-sugar nectar). Any solid material getting jammed in the proboscis is going to be tricky to get out, so the proboscis itself will have to be narrow as a matter of self-protection, restricting the amount that can go in at a time and prolonging feeding time.

If this proboscis is involved in injecting the liquefying venom, it will have to be narrow and sharp to be able to pierce through even soft skin like ours, mosquito-style. If there are insect-like chitin shells, tough hides and scales involved, this appendage will have to be pretty strong to avoid getting damaged.

To get enough nourishment out of a 'kill', it will need to liquify a large amount of mass in a short time. If this means the venom is strong and can liquefy even large amounts of protoplasm fast, the problem of production and storage of this venom will mean proboscis-creature will need specialized organs to deal with large amounts of this highly corrosive substance. Else it means it will have to inject the prey multiple times all over to ensure it liquefies properly. Either way it will need to wait before the prey is sufficiently liquified to eat. This may be a longer wait than it can afford, especially if there are super-predators that prey on our proboscis creature.

The closest to this ambush/trap/attack and liquefy strategy is spider-venom but even a spider eats semi-solid chunks along with partially liquefied matter. The ability to process solid/semi-solid diet via teeth/digestive enzymes enables the creature to ingest more matter, reduce wastage of good edible matter and hastens a creature's departure from the 'kill scene'. There's no reason why a creature should not evolve an injecting apparatus like hollow teeth or fangs but restricting it to feed via this apparatus would turn detrimental to its survival.

So, no, I don't see this creature getting very big, a quarter plate-sized ambush specialist at the most perhaps but then it would have to compete with the comparatively more efficient spiders in that size bracket.

Depends if you want it inside or outside water. The Pistol Shrimp has a similar weapon. It kind of cogs it piston then bursts it forward with enough force to break glass. However it's tiny, growing up to 5 cm/2 in.

A better candidate would be the mantis shrimp. These guys come in two forms. One is more akin to a praying mantis. It has long spearlike claws. The other closer to our previous friend the pistol shrimp. The guy pictured above is one. See that sphere at the end of his limb?

Like the pistol shrimp he can cog and launch it forward. However this guy doesn't just break glass. He is known to break finger bones. Or as Wikipedia puts so well:

Both types strike by rapidly unfolding and swinging their raptorial claws at the prey, and can inflict serious damage on victims significantly greater in size than themselves. In smashers, these two weapons are employed with blinding quickness, with an acceleration of 10,400 g (102,000 m/s2 or 335,000 ft/s2) and speeds of 23 m/s from a standing start.[10] Because they strike so rapidly, they generate vapor-filled bubbles in the water between the appendage and the striking surface—known as cavitation bubbles.[10] The collapse of these cavitation bubbles produces measurable forces on their prey in addition to the instantaneous forces of 1,500 newtons that are caused by the impact of the appendage against the striking surface, which means that the prey is hit twice by a single strike; first by the claw and then by the collapsing cavitation bubbles that immediately follow.[11] Even if the initial strike misses the prey, the resulting shock wave can be enough to stun or kill.

These guys are lethal. They're also much larger then the pistol shrimp. The largest ever caught being 46 cm/18 in. That's significantly larger than any bug. It shouldn't be too hard I imagine to scale it up slightly and then add the proboscis in the center. I'd say 50cm long is absolutely doable, larger probably as well but I'm not sure how well it would work on land. 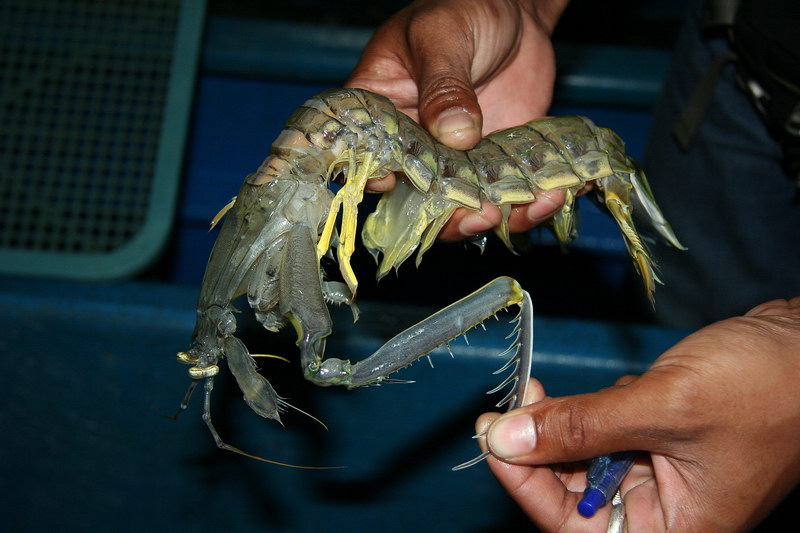 As explained by artemissunshine, it seems unlikely.

Besides, liquefying your meal only works if it comes wrapped in a convenient carapace which can then be sucked empty. Enzymes that liquefy vertebrate meat would also dissolve the skin, and your tasty meatbag would end up a puddle on the ground... so it would have to be wrapped in something prior to digesting. I suggest quick-dry green slime.

However, we can do more nasty stuff with a proboscis!

Why not use it to shoot eggs or larva inside the victim instead?

Snakes inject their venom through hollow teeth, and the narwhal has a pretty large, weapon-like tooth. Since the probable prey of such a large creature would probably not have an insect-like anatomy, the injection of digestive fluids would seem unlikely.

Not the answer you're looking for? Browse other questions tagged reality-check biology creature-design evolution aliens or ask your own question.

8
How can a vertebrate animal evolve for extended flight before living on land?
10
Vertebrate-like creatures with more than four limbs
21
How can we have dragon-sized butterflies?
3
Can reptiles evolve like primates?
0
Can a flying predator have slit-like pupils?
18
Can a species have different ancestors?
6
Bee-like vertebrate flight surface
12
Is it possible for a vertebrate creature to have a ribcage/chest mouth?