How to keep unwanted visitors out?

In my stories, there are two fractions of beings called Shining ones - and regardless of their war, they live (very close to each other) in Nightshine Asylum, an abandoned fortress from an age of civil war on the eastern plains.

Nightshine Asylum was built in northern part of the Cloudy Mountains. It is accessible from Thunder Pass via a very long underground staircase.

The Guardian House was built to provide shelter from snow storms that are very frequent in all the Cloudy Mountains and mostly in Thunder Pass. Also it is used as the gate to Nightshine Asylum.

Unnamed hostile1 fraction (because I still haven't given them a name) lives in the (original) upper part of fortress.

But how to keep unwanted visitors out (of Nightshine Asylum, and mostly Thunder Pass' Guardian House), if you cannot use magic (because it would disclose your presence) and you must keep yourself safe from the enemy (because enemy is much stronger than you) by staying at home.

Reason for not using of ways like physical barricade is simple: the Guardian House must be kept ready to be used (as shelter from snow) by anyone who will need to use it. Outside of the House is not sufficient space for placing of any barricade (Thunder Pass must be passable, it is a trade route) - and inside too, of course, because the House is quite small (only one room sufficiently large for comfortable staying for some hours, for one family with two children).

magic security safety
Share
Improve this question
edited May 7 '17 at 1:39

So: The Guardian House is a place of refuge

by anyone who will need to use it

That means no dumb barriers like spikes. There has to be some way to sort out the people who need to use it as a shelter, and people who want to get in who do not need shelter.

You need to be able to tell one group from the other, which means you need something intelligent which lives in the house and is capable of throwing out the unwanted. You need a bouncer. Like a bouncer, this resident of the House will turn away some at the door when he doesn't like the looks of them and evict others once their nature becomes apparent. Like a bouncer he must be capable of dealing with the ordinary sorts of troublemakers expected, and able to call for backup - in the nightclub analogy, the police or possibly muscle from elsewhere in the establishment. You can make the bouncer whatever sort of entity is congruent with your story. 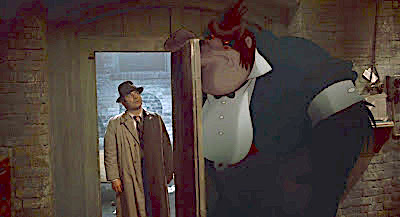 It is pretty poor engineering to have a place of sanctuary open to all serve double duty as the gate to a place where outsiders are unwelcome. I like the idea of the bouncer grousing and grumbling about exactly this.

At the back of the Guardian House is a stairway into the mountain. By going up the stairs you come to a decent sized room carved into the stone. No windows and crappy ventilation, sorry. The room holds a sizeable supply of dry wood needed to keep the Guardian House warm during storms. Maybe some emergency food as well.

Hidden in the room is a secret door. Lack of windows and the "unfinished" construction of the room, it is just a place to stack wood securely, make the door very hard to find unless you know where it is and how to open it.

Behind the door is a short corridor leading to another room with crappy lighting and "unfinished" construction. The corridor probably has some sort of a simple lethal trap. A poisoned bear trap, for example.

In the second room there is a chest with a decent amount of various small denomination coins and low value trinkets. It should look like the stash of a moderately successful bandit from a generation or so ago. The chest is also trapped with a much better hidden trap.

The second room also has very well hidden secret door leading to the stairway to the nightshine asylum.

Adding permanent staff is also an option. Depending on the specifics of the Thunder Pass a small inn secure from the elements might be economically viable.

You should also make sure as many of the regular travelers as possible are trustworthy.

Not the answer you're looking for? Browse other questions tagged magic security safety or ask your own question.

189
How do I protect my shop from teleporters?
8
How do the tides work when the sun powers the moon to keep out evil?
25
How to safely knock someone out
6
How to use a certain technology to communicate with colonies but keep the how-to a secret?
20
How to keep the anonymity of people attending a regular event taking place at the same location everytime?
4
How can I keep my planet the safest in the galaxy and still engage in war?
45
How do I keep my slimes from escaping their pens?
19
How can I estimate the maximum mass that can be safely handled in low to no g?