Would mountains made of diamond erode?

So diamonds are the hardest natural substance, but can be broken/shattered by impacts.

If a planet had a large mountain range made of diamond (maybe the size of the Rocky Mountains on Earth), would it erode at all? (This is the same system in How close to a supernova can a planet retain an atmosphere? so the diamond mountains and general bizarre geology is because this planet started out as an ice giant, got burned down to a "chthonian planet" core, then got new oceans/atmosphere from a bunch of comets).

I'd like this to remain a barren and lifeless (and therefore traditionally feared & avoided) area, because no soil means no plants means no food sources and no real ecosystem, but would it work that way? Would windblown dust from elsewhere cause some soil to accumulate even if the mountains were un-erodable? Would lightning shatter the mountains enough to produce diamond-dust that could erode them further?

Or is the concept of diamond mountains just stupid? If so, is there another way to get a soilless large area? (It needs to cover at least a significant part of a continent and remain soilless/lifeless for thousands of years and preferably tens of thousands, so new volcanic rock won't work.)

The mountains will erode, but very slowly. You don't have to worry about it for a very long time (talking billions of years here).

You will have a problem with dust/dirt, though, as windblown particles will accumulate on your diamond mountains over time, allowing plants to grow there. One thing that might help with this is to drastically increase the slope of the mountain compared to mountains on earth, and make the sides of the mountain roughly flat (don't ask me how this happened). This will result in dirt being more likely to slide off, and the layer of dirt may be too thin to grow anything besides a few mosses. This would also be a very interesting (read "impossible") mountain to climb. The leeward side of your mountain, however, would have very little dust (probably just a fine coating) and could be the area that everyone is afraid of.

Lightning will not erode your mountain, but it will set small portions of it on fire. Diamond burns at a temperature of approximately 700-1200 degrees Celsius (but it won't set your whole mountain on fire because diamonds don't produce much heat when they burn).

The only other way I can think of creating a large, soilless area, is a wall of diamond mountains, in a ring around the aforementioned area, with immense heights and no large drops between them to prevent most particles from being blown over the tops. You couldn't get into this valley in the center, so it probably won't work for you.

They will erode as fast as a normal mountain

Mountains are not significantly eroded by wind, and water uses whatever the mountain is made of as an abrasive. Differential thermal expansion will shatter it in no time. Water and ice will erode it as fast as any other mountain becasue they are using diamond grinding against diamond. Plus since the dust from this mountain would be basically pure carbon mixing with whatever else is around plants may well love it.

but really you are overthinking this.

Normal mountains can remain largely lifeless for tens of thousands of years with no problem, all you need is very little rain. The Grand Tetons, for instance, are millions of years old.

If you want large soilless expanses of flat ground then deserts are your answer, soil requires water. Some last for a long time, there are several places on earth that fit this. The Atacama Desert is a good example.

Not stupid. Just... far beyond highly unlikely that much elemental carbon will be all together for the time it takes, at the high pressure needed, to rearrange carbon atoms into diamond. (There's a reason the largest terrestrial diamond ever found is a measly 22 ounces.)

If so, is there another way to get a soilless large area?

Sure: a salt lake. 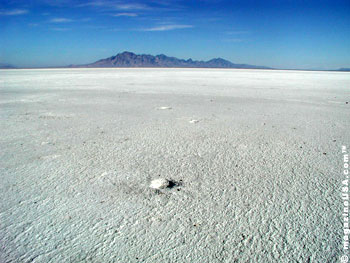 Not stupid, but misinformed.

Diamonds are very hard but are not very tough. You can break a diamond by dropping it, or by banging a pan against it. Seriously. Ask anyone who has ever damaged an engagement ring.

Hardness is an indicator of which materials can scratch or be scratched by a given material. Diamonds are the hardest material we know of. But what makes them hard also makes them brittle. They have practically zero elasticity. All the energy you put into a diamond goes into breaking it.

Mountains are formed by geological forces many orders of magnitude more powerful than what is used to cut a stone, so you wouldn't ever get even a small hill of it. If you have a large content of diamond in a substrate, it will more likely become a flat desert made of small diamonds and diamond dust.

Another approach which has nothing to do with diamonds.

I have walked upon an area that was apparently both soilless and lifeless. (Although I'm sure both existed to some degree.) The recipe was simple: This was a plateau at around 15,000' up. Note that the temperature was chilly but not frigid (higher up was a snowcap, but not on the plateau) and there was always a strong wind.

We had seen our last bit of green at 13,000', we saw no macroscopic life (other than humans) until we returned to that point. The surface looked like someone had carefully paved it with rocks but it was solid. At the time I made no attempt to investigate it in detail, in hindsight I think sufficiently small particles were carted off by the wind.

Scale this up to the size you need. (Think Tibet but even higher.) Put some Everest-scale mountains to put a major rain shadow across the area.

Not the answer you're looking for? Browse other questions tagged science-based reality-check geology .

3
How close to a supernova can a planet retain an atmosphere?

8
What would life be like on the remnants of a shattered planet?
7
How might a planet be made of mountains? (And ocean)
36
What size would a diamond made from a human be?
4
Civilization on a diamond exoplanet?
6
How long would a creature the size of an argentinosaurus' bones last in a scrubland?
10
Moving mountains
4
How Would Organic Material Erode If Petrified
4
How fast and how would fjords erode?
4
How would a corrosive sea not erode the foundations for islands?
5
How "geologically Earth-like" can my large terrestrial planet get?