What economic effects would magically-enforced isolation have on the Victorian age British Empire?

The year is 1862. A magician raises up an impenetrable magical barrier around the British Isles.

The barrier is spherical in shape, and it contains England, Scotland, Wales, and Ireland. It also contains a not insignificant part of the sea north of Ireland, and most of the channel. The barrier allows for animals, natural forces, and inert matter to pass through freely, so the climate remains unaffected. But humans are prohibited from entering or leaving. Those who try invariably find themselves turned around, with their minds in a fog.

An additional magical effect blots the contained area from the common memory of everyone outside of the barrier. When outsiders approach the contained area they also find themselves suddenly turning back, and quickly forget the experience. Messages sent from across the barrier appear blotted and unreadable. To make it brief, no help is coming. My question is, how would this sudden and drastic isolation affect the industrial, imperial British economy over the course of the next several decades?

Would they be able to sustain their own population? Would they suddenly want for certain resources, and have surpluses of others? What challenges are they sure to face, and how might they be forced to adapt?

The projected social and cultural changes wrought by isolation are, for the most part, outside of the scope of this question. But I'd like to make a significant exception for the following:

In other words, wherever culture relates directly to questions about resources, commerce, and politics it's fair game.

If anything requires clarification please ask in the comments. 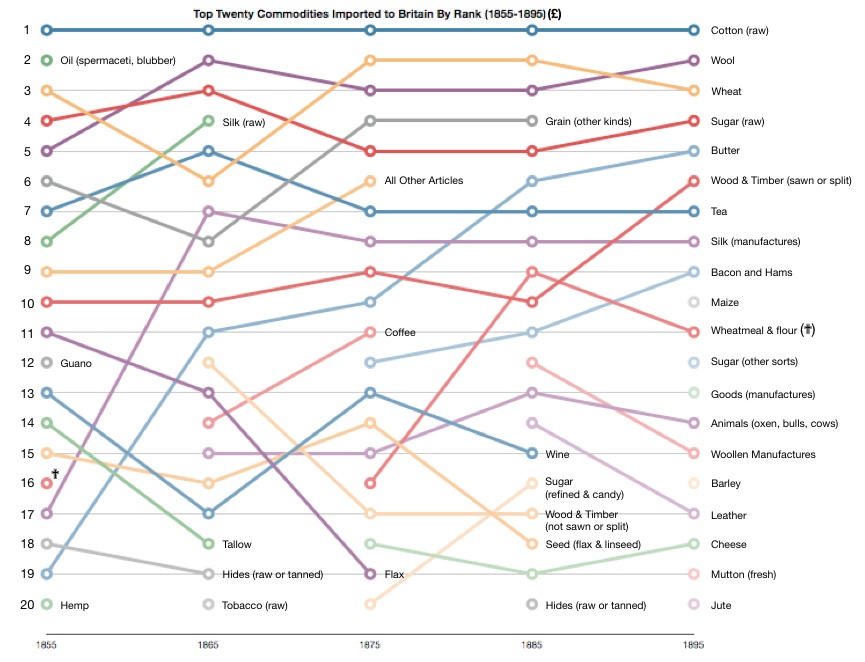 Its textile industry was mostly based on imported raw materials. It desperately needed food. It needed wood (all that coal mining started because of lack of wood).

2) Drop of state revenue from tariffs and charter fee from East India Company.

3) Loss of exports market for its industry.

4) Mass migration back to villages, turning pastures lands back in to fields.

Long term result: back to agriculture country, with less population (actually after initial famine it may actually rebound), almost no industry (and even shortage of wood). Any slow technological development would be eaten by Malthusian Trap.

The world disappeared on a Tuesday, at 10 o’clock in the morning of the 8th of May in the year 7370 since the creation of the world, and 1862 since the Birth of the Saviour. On that day, the dreadful Abdul Qayyum used his magical powers gained from his deeply flawed study of ancient Egyptian hieroglyphics to destroy it, with only the Blessed British Isles remaining intact, the cursed magician’s spells having no power of this green and pleasant land.

Some say that the world did not in fact disappear, but that it is hidden behind an impenetrable wall of mist, but they are nothing but heretics and servants of Baphomet, whose testimony is worthless and whose opinions are not to be taken into account by the truly faithful.

The news of the disappearance of the world took some time to reach Whitehall, and the Parliament in Westminster, and Her Holy and Most Gracious Majesty the Autocratrix, who was then only Queen, because the British were not that much concerned with the affairs of foreigners. But tourists reported that the French coast was no longer visible from the top of the White Cliffs of Dover, not even on excellent weather; ships stopped coming, not only from France, which would have been understandable, the French being always ready to make mischief, but also from New Zealand, and Australia, and India, and the other various Dominions of the British Empire. Initially outbound ships left British ports as usual, but soon, when some of them came back manned by stunned sailors with no memory of their journey, Whitehall saw that something was terribly amiss and issued an order to keep all ships in port.

The Prime Minister at that fateful time was the great and most inspired Lord Palmerston of the Liberals, and his prompt and divinely guided actions are what saved us from a horrendous fate. For he had a long experience handling the reins of power, and he saw immediately the dangers ahead; blessed are our Isles to have been ruled by such noble figures! He immediately summoned a meeting of the Cabinet, where the course of action was discussed and approved.

Hopeful that the diabolic phenomenon was only partial, the Lords of the Sea dispatched naval ships to find a passage through the mists, but those either did perish heroically, or, of those which returned, the crews came back devoid of memory and with their very reason shaken; and no passage was to be found.

The Cabinet then prepared a two-pronged approach, making the United Nation ready either to survive for a limited time until communication with the Empire was restored, or else to resist and thrive through the centuries should the world have truly vanished, as some more forward looking gentlemen had already started to realize. For this purpose it was imperative that an inventory be taken of the resources available on the Isles, and for this purpose a General Inquisition was formed, to inquire the lands and chattels of all the loyal subjects of the Her Most Gracious Majesty; the Liberal Party being in office, it was naturally incumbent upon them to staff the Inquisition, much to the dismay of the Tories, who were in Opposition, where their rightful place shall be forever; and from the returns of the First Inquisition a Second Domesday Book was compiled, enabling the providential Government to ask from everybody according to their abilities in order to provide to everybody according to their assessed needs.

It was seen by the Government that if the 25 million people living at that time on the British Isles were to survive on the limited resources of our land, a reasoned yet determined control must be imposed, both on the production of food and commodities, and on the consumption. For this purpose an Enabling (Autocracy) Act was put in front of the Parliament to the effect of putting unfettered power in the hands of the Sovereign in Parliament, Her Most Gracious Majesty being now styled Autocratrix, for a term limited only by the possible re-establishment of the links with the outside world. The Bill of Autocracy was passed by Acclamation, despite the lamentable opposition of the Tories, who had begun whispering among themselves and organizing a most insidious resistance derived from the treasonous ideas put forth in their Manifesto by that despicable pair of agents of destruction, Karl Marx and Frederic Engels.

The first year after the destruction of the world was the hardest, as the British economy was oriented towards blind profits, achieved through exports of trinkets and machinery to the Empire, while the people of the Blessed British Isles were dependent on the import of raw materials and staple foods; but this was quickly corrected with stern energy, everybody being alloted both a place of work and an adequate ration of the collective products, in accordance with their station in life, be they ordinary Commoners, of Liberal Party Members, or Members of Parliament, or Public Servants, or Nobles. And nobody wanted for nothing, and nobody complained, for even the Tories received some daily bread, and had a roof over their heads, and occasionally a piece of cloth.

It is admirable how the United Nation united around the Autocratrix, for everybody was content with their place, and with their allotment; and with the diligent efforts of the Secret Inquisition there was no dissent and no voice was raised in protest except maybe for a very short time.

By 1864, Mr. Joseph Paxton of the Royal Horticultural Society announced that his efforts of acclimating the Ficus, the Date Palm, the Cotton plant, the Jute and other formely tropical plants, not to mention the Citrus trees, had met with sudden success; which many of the hierarchy of the Church attributed to the Divine Providence, because, as the Archbishop of Canterbury said, "Great evil may not come in the world unanswered by the Divinity". This lifted the spirits of the United Nation, and with joint forces a new road was opened leading to a new life of fulfillment under the benevolent supervision of the Autocratrix and her Liberal Inquisition.

A general election was called in 1865, in order to obtain a large popular mandate for the continuation of the regime; despite the despicable opposition of the now openly Communist Tories, the return of the ballots showed 99·5% in favor, a result which consolidated the will of the people to continue progressing on the new luminous path. Immediately afterwards the Bank of England introduced the Common Pound for use by Commoners, thus separating the hard money handled by investors and other People of Good Will from the ordinary daily money used by the workers and laborers, thus allowing finer and better control of the continuous multilateral development of the Great Society.

Under the direct and personal guidance of the Autocratrix and her Prime Minister Lord Palmerston, the work of the scientists at the Royal Society, especially the work of Mr. William Thomson, resulted in great discoveries and easements; the first illuminating electric vials were displayed publicly in the gardens of the Buckingham Palace in 1877, on the occasion of the 40th anniversary of the coronation of Her Most Gracious Majesty. By 1879 the best houses in London had farspeakers, and by 1883 the first sonorous recordings were being made for the marvellous audioscriptal machines, letting even upper middle class families enjoy the cheerful tunes of Gilbert and Sullivan’s H.M.S. Pinafore.

Today, as we approach the 30th commemoration of the Great Isolation, we live in a United and Content country, well set on the path of continuous development, well supplied with all the necessities and luxuries of civilized life, free of fear, trusting in the Divine Providence and its direct representatives on this world, Her Most Gracious Majesty the Autocratrix, the Liberal Party and its perennial leader His Grace Lord Palmerston.

"Great evil may not come in the world unanswered by the Divinity" is taken (slightly adapted) from Destiny’s Shield (3nd volume of the Belisarius series) by David Drake and Eric Flint.

Not the answer you're looking for? Browse other questions tagged economy alternate-history history natural-resources victorian-era .

10
What would the impact of a global and unchallenged empire be on world history?
13
Economic Effects of 'The Rift'
8
What would the British have done in Argentina and the surrounding area if they had been victorious in Buenos Aires in 1807?
1
What could be the consequences of economic isolation in a medieval post-apocalyptic fantasy setting?
29
Deriving price from a framework of production in a medieval economy (ie "Can I have a 1,500 gold meat pie, please!")
6
Effects of unique magical artefacts on economy?