Detecting objects around other stars

My question on refueling around stars got me thinking about the transit method of detecting planets and how it could be used to detect a ship whilst it is refueling (either by accident or on purpose).

Now I know whether they can detect the ship depends on the size of the ship and the distance it is from the sun. I'm not particularly fixed to these figures but it leaves the question too broad without it so lets say my ship looks like a cylinder $20$ kilometers long and with a radius of $5$ kilometers.

I want the ship to be detected and then, to avoid detection again, one of the scientists on board comes up with the neat solution Xen2050 proposed so the ship can hide next to a planet.

So my question is whether it is realistic to assume a civilisation with similar tech levels to us could detect a ship like this within their galaxy.

An object that size simply would not block out enough light to be detectable. If we assume a sun-sized star then the surface area of its disk is $1.5\times10^{12} \text{ km}^2$ and your ship at its largest apparent surface area is $200\text{ km}^2$. Which means it would block $1.3\times10^{-8}$ percent of the light, which is well inside the noise coming from a star's brightness measurement. Here is an example of what a light curve from Kepler would look like anything not planet sized would be undetectable.

Here are some examples of a light curve from the link. Three different transitioning planets are shown here. Notice how the measurement jumps around from environmental noise. 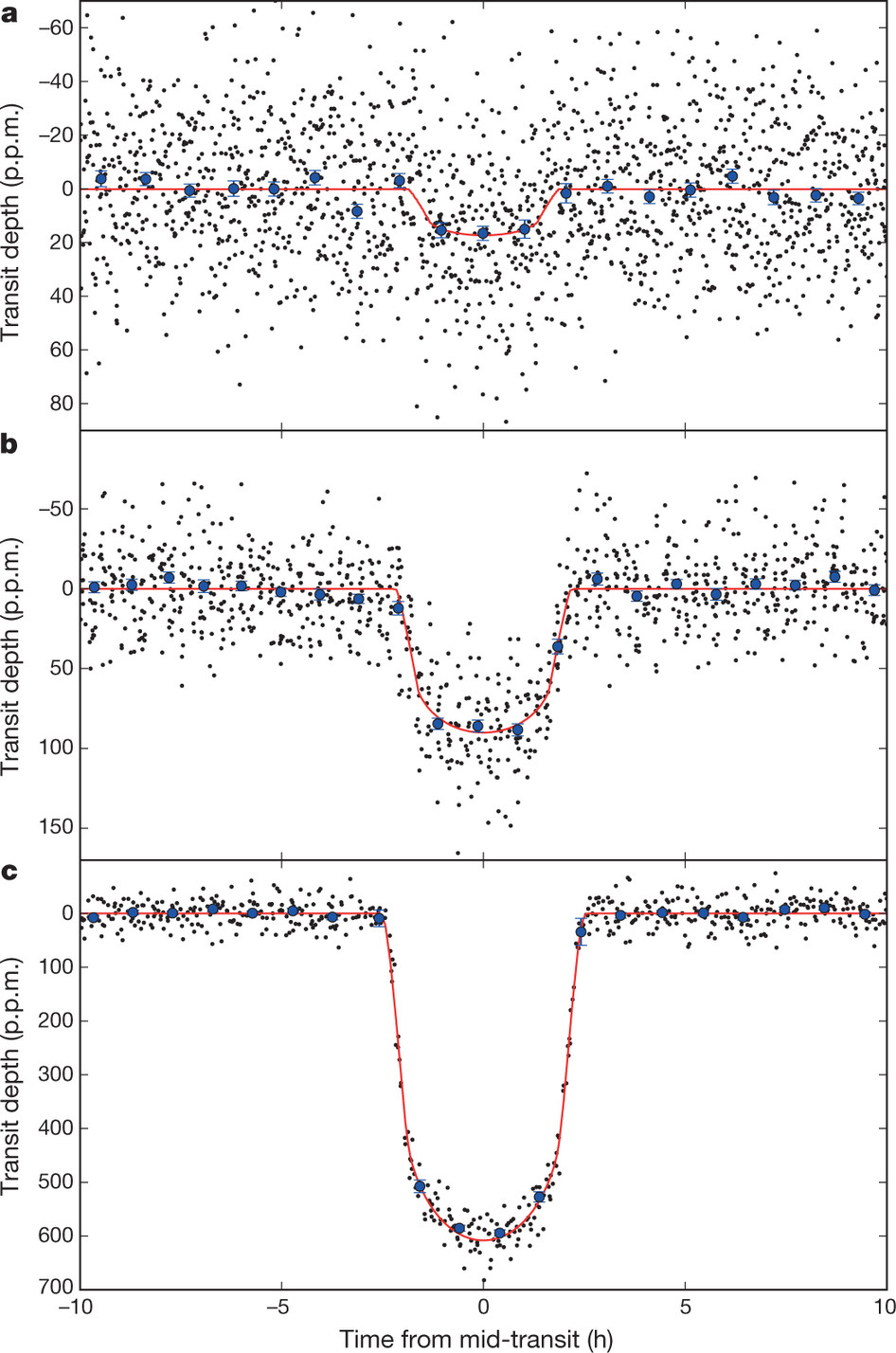 TL;DR: It seems like your craft will produce brightness changes many orders of magnitude too low to be detected by a civilization with technology comparable to ours at the present day. Even in a couple of decades, I don't think our telescopes will have improved enough. In particular, variations in the star's intrinsic brightness will drown out any signal of an exoplanet.

I simulated the transit of your spaceship in front of a Sun-like star. Besides the dimensions of your ship, I made the following assumptions:

A quantity of interest is $\Delta F/F$, the fractional change in flux at a point during the transit. I found the maximum value of $\Delta F/F$ to be $4.14\times10^{-9}$ - higher than Joe Kissling's answer of $1.3\times10^{-10}$. The reason for this, I think, is that Joe used the average intensity of the Sun; taking limb darkening into account means that the center of the solar disk is brighter than average, meaning more light is blocked at the peak of the transit, and less light is blocked at the beginning and end.

Lost in the noise

There are two factors that determine whether or not a given value of $\Delta F/F$ can be measured by a telescope. The first consideration is that a star's luminosity can vary on timescales of hours or days. Even a non-variable star like the Sun may experience changes of $\sim10^{-5}$ - orders of magnitude larger than our value. Sunspots, for instance, can be contributors. Here, stellar variability is going to wash out our transit.

In short, even at the peak of the transit, the change in flux is going to be several orders of magnitude too low for current (or even near future) telescopes to detect, and it will likely be lost in regular fluctuations in the star's luminosity.

It's not completely clear why something that happened 1 yr, or 100,000 years ago matters. From a distance of 1 ly, it takes 1 year for the light to reach us. A cylinder of the dimensions of 20 x 10 km would occlude < 1.5E-8 % of the Sun's light, and if it's orbit was oriented randomly with respect to our line of sight would have 0.5% of actually transiting across our line of sight. I'm not very familiar with astronomical statistics, but for general gaussian noise, the signal to noise ratio improves with √n where n is the number of samples. So, while I'm too lazy to compute the orbital velocity of your ship (at whatever distance from the star) after 100,000,000 transists (assuming we've been observing them all, and if we have, WHY???!!) the s/n will have improved by a factor of 10,000. So, say that the transit is in our line-of-sight (is in the 0.5% of all possible orbits), then it would be the equivalent of improving the light occlusion by 10,000X - meaning instead of 0.000000015 it would be 0.00015%. I think that is detectable, but I'm just basing that on what I think p.p.m means on the graphs I've seen. (I think it means parts per million of the average light intensity). Finally, most of the small exo-planets have been between 10 and 2000 light years from Earth. Our Galaxy is a very dusty place. We can see thing only quite close to us unless they are unusually bright. The rest is lost in the dust. But who cares about seeing whether your spaceship stopped to fill its tanks 3000 or 300,000 years ago?

Not the answer you're looking for? Browse other questions tagged science-based planets spaceships .

22
Refueling from stars
9
Noticing visitors to our galaxy

31
How to effectively slow down a ship about to shoot through the Solar System at 0.6c?
12
Stable ringworld interactivity with other solar system objects
9
Satellite salvaging: safely de-orbit and retrieve spacecraft or other objects
2
My ship is traveling at 0.05c, is the energy from debris impacts trackable?
8
A possible solution to stealth in space
9
Vertical cyclones in a rotating space habitat
6
Surveying the Barrier
4
I want humans to discover alien communication after they arrive in our solar system, is that possible? If yes then how?
7
Aliens pressure cook the Solar System, do we notice?