So since the 2 hearts are in sync with each other from embryonic development until a health problem affects 1 heart and the other heart compensates in response to it, it makes sense, to me at least that blood pressure would be increased even if left ventricular pressure stayed the same. 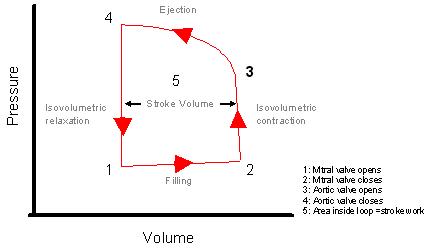 Assuming that the pressure-volume loop of the left ventricle and in fact all 4 chambers of the heart stayed as is, for the first few inches of aorta and the last few inches of venae cavae, the blood pressure would be the same. But most arteries and veins would not have the heart and their own muscular walls as the only sources of blood pressure.

You also have the fact that the arteries and veins are spaced so closely that they would push against each other as the hearts pump in or out of sync.

So this leaves me with only 1 option I know of if I want to keep this double circulatory system. That is to raise the blood pressure in the arteries(so maybe what would be stage 1 hypertension for us would be normal blood pressure for my humanoids). This will increase blood flow because now there is more of a gradient between the arteries and veins. Bigger pressure gradient = more blood flow = more oxygen transport.

Since my humanoids naturally have a slower heart rate due to 2 hearts being in sync, this works well(at least I think it does). What is bradycardia for us is normal for them.

But would raising arterial blood pressure to increase blood flow despite the fact that now there is more force from each artery pushing on the artery next to it work to significantly increase oxygen transport(which is why I doubled things up(quadrupled for coronary))?

In terms of tissue oxygenation, what matters is how quickly the blood returns to lungs to be reoxygenated. If your two hearts slow this down, they will be counterproductive.

If you are after an adaptation to low oxygen look at how humans do this: more oxygen carrying pigment and more capillary area in tissues.

By the way, the benefits of having redundant organs is way exaggerated in fiction. Any disease process that effects tissue A will eventually effect all of tissue A in the body. We have two kidneys. What percentage of kidney diseases effect only the right kidney do you think?

The fact that one heart can compensate for damage to the other means that each heart / circulatory system is not a closed loop. I could imagine having a dedicated accessory heart to help under high O2 demand conditions, which served to drive extra blood to muscles. In some animals (like dogs) spleens can contract and so do a little bit of this.

No dog is going to be save from heart damage by the spleen. I conclude these Kepler critter hearts are redundant. That is great if one heart poops out but I struggle to think of how a whole extra heart could help a young, healthy individual.

Think about the things bike riders do to get extra blood to their muscles. More hemoglobin, more efficient heart, clear lungs. If you check the blood pressure on a performance athlete is is very low. Higher blood pressure does not help them with oxygenation.

Maybe an extra heart would be good if these creatures are extremely tall and the impulse needed to send blood to the top is so strong it is difficult to contain at the source. An accessory heart midway up could help keep the blood moving.

I agree with AlexP that it is hard for me to think about how such minute detail advances the story. Unless this is a SectorGeneral type story about physicians who must deal with alien physiology.

If one heart can compensate for the other, then presumably each heart pumps blood to every cell in the body, so the idea that you have two arteries side by side does not make it a closed loop: In the end the blood flows must merge at every possible endpoint to deliver oxygen to every possible cell.

To me, your design might make more sense if the two hearts (like those in actual conjoined twins) each had their own primary circulatory responsibility but could "bleed over" to the other system.

Returning to fantasy, such a design could have pressure-triggered sphincter portals; closed if blood pressure is above some threshold on both sides of the portal, open if blood pressure is significantly lower on one side (i.e. one heart is not pumping very well). With portals open, one heart has to pump twice the blood to support the whole body; perhaps raising its rate and blood pressure then; but in normal operation it only has to pump enough to support its half of the body. The division can be whatever you think is important; left-right, top/bottom, above-the-neck/below-the-neck, torso/limbs, whatever. The division should probably inform the heart position within the body.

Multiple hearts and a distributed circulatory system is not a bad idea. After all, IRL we are better off having many power stations on each grid instead of just one. But evolutionarily speaking, it seems unlikely the entire circulatory system would just be doubled up; just like it doesn't make much sense for every house to have twice as much wiring from two independent power stations to every single outlet.

That is far too high a cost for an advantage that appears very rarely. In power stations; we can automatically throw a switch to help compensate for a disabled power plant; i.e. we energize one cable and we power the whole domain of the disabled plant. Your multiple heart system should be similar.

Not the answer you're looking for? Browse other questions tagged creature-design blood humanoid .

14
Living without a heart
7
Cyanoglobin plausible?
1
EKG, worried about merging
3
Is blood pressure a good restriction?
22
How to increase the efficiency of lungs
10
What impact would copper-based blood (haemocyanin) have on a humanoid creature?
4
Flaw in having 2 circulatory systems: Bleeding to death
12
Could a decreased heartrate thanks to better hemoglobin lead to an increased lifespan?
8
Creating a scientifically semi-valid super-soldier, part 5: Heart and circulatory system