Would it be possible to punch someone into space?

If two incredibly strong incredibly indestructible characters were fighting on earth could one punch the other one into space? By space I am assuming that we at sea level and are trying to escape the earth's gravity well to guarantee the victim does not return to the planet.

We are assuming that strength is infinite and are completely indestructible, but there are some considerations. I would like to have a habitable planet left afterwards. Overall it would be good to know how much collateral damage this could cause.
Let's assume the character cannot magically brace themselves against a point in space like Superman, and there would be an equal and opposite reaction, that may also cause collateral damage.

Besides the superpowers these characters have weight and shape similar to normal humans. We can also assume they are perfectly rigid objects and that the punch is perfectly elastic if this makes life easier.

Also if punching is too destructive, could a throw that gives a little more time for acceleration reduce the damage caused to the surroundings?

An object traveling those 12 km from sea level at 11,000 m/s would be down to under 200 m/s due to air resistance after a quick calculation here http://www.jayandwanda.com/tt/ballspeed_calc1.html . This means the answer does not remotely consider putting in enough energy

. . . but you've stated that they are both indestructible. So neither one will be crushed like a soft peanut.

So, let's assume that the puncher does in fact deliver a force of 770,000 Newtons to the opponent. A force should then act on the puncher, of the same magnitude and opposite direction.

Let's look at a diagram here. Assume the opponent is launched at an angle $\theta$ from the ground: 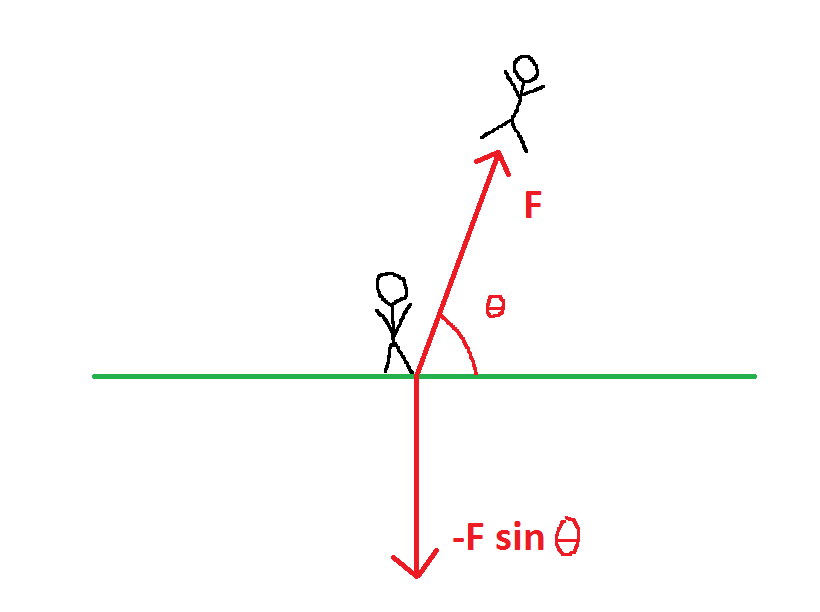 The force on him is $F$, and so the force on the puncher is $-F$. The vertical component of this force is $-F\sin\theta$. Let's assume that $\theta=90^\circ$, i.e. the opponent goes straight up. We see then that the vertical component of the force has a magnitude of 770,000 Newtons. Assuming the person has the same mass as the opponent, he will then have a kinetic energy of $4.235\times10^9\text{ Joules}$, the equivalent of roughly one ton of TNT. This will be aimed directly at the ground.

That's like aiming two Tomahawk missiles at one spot ($\theta=30^\circ$ would be as much as one). One is bad enough. Both opponents may walk away unharmed, but there should be a fairly large crater.

These are to the best of my knowledge, the physics of super human strength related to punching (if there is such a thing):

To start, when a human being punches, he/she generates force by one of the following:

Torque - generate centripetal force by swinging the weight of the arm

In order to generate escape velocity, a human being would not be able to use those means because:

Torque - The person would have to anchor the centripetal force with their body somehow, so unless they have super-human obesity (or density) or super-human physics, they're not really going to be able to aim using torque.

So basically you need to answer this question: Where does the super force come from and when does it work?

Where does it come from?

If the force comes ex nihilo or in another way that does not obey the laws of physics, then all bets are off, but then you can have someone get punched into the atmosphere (totally worth suspending physics).

You are stuck in a catch-22 I like to call the super-cancelling dilemma. If a person can punch with super human force, they can also absorb that amount of force (dissipating it "into the universe" or whatever) otherwise they have to break the laws of physics. So the puncher generates EV newtons by creating and simultaneously absorbing that force in his/her own body thus reaching the punchee with the force and transferring it. But here's the catch 22...

If BOTH brawlers can absorb that amount of energy, they will not be able to force each other at all (EV - EV = 0), and the fight wouldn't appear to be super human unless a regular object or person got in the way in which case it would be obliterated.

The one brawler would need superhuman means, so the ball is back in your court since you got them into this predicament to begin with - now you have to get them out.

The fight would look normal if they could absorb exactly the same amount as they could dish out, so if one is slightly stronger than the other but multiplied by hundreds of thousands of Newtons, you're talking about guys flying through the atmosphere again, but that means the one person must be roughly twice as strong as a super-human who can generate EV or more force (2EV - EV). If there is some fluctuation (as there is in a real fight), and that fluctuation can be in the thousands of Newtons, now you're talking about a one punch fight. One guy punches punches with EV + 1 Ns and the other guy absorbs Ev - 1 Ns of force. Well, if they are immutable, now you've got that guy flying with ~2000 Ns in whatever direction he was struck.

If a punch misses, can that puncher "reabsorb" the force even though they absorbed it once already to create it, or will that person go flying in the direction of their swing?

Can the super-human body absorb at the same ratio as a regular human? if so, it will appear like a normal fight. If not, they'll obliterate one another at the first punch with a only a tiny variation relative to the normal godly force.

If there is an angle, deflection, speed, or interference at all, you need to recalculate (in other words, you are facing a myriad of variables)

So No, that's not possible based only on the parameters you gave. They would need a way to create and absorb the force at the same time.

Not the answer you're looking for? Browse other questions tagged physics super-powers or ask your own question.

5
How would it be possible for an island to sink into the sea?
0
What kind of damage would a thunder punch do?
28
How high can Ludicrous Leg man jump?
4
Space elevator into a blackhole. Possible?
6
How much force would your fist need to strike with to punch through a human body?
6
Would it be possible for someone with ice powers to stop or “freeze” a wound to their heart?
3
Required secondary powers for someone who can manipulate/turn into smoke?