Cauldron of Storms: Geography to create and isolate localized mega-storms

Welcome to the Black Cauldron. The Cauldron of Storms, even. It's a sunny day now, perfect for fishing. Just not here. There's no boats on the water. The weather can go bad, quickly. And anything on the water then... Well, there's plenty of wrecks on the bottom. Big ships. Little ships. Sometimes people try to race across the Cauldron to beat the storms. Sometimes they get out. Sometimes they don't.

I want to create a sizeable bay/harbor that, in most aspects, is pretty reasonable. Until a storm comes along, then things get unreasonable.

I don't want all weather or storms to be devastating, coast-leveling catastrophes, but I want them to be fairly common - Common enough that a cultural stigma has developed around using this harbor pretty much at all. Normal weather happens, but then you can get the "un"predictable mega-storm that goes through and causes havoc.

The things I want in this storm cauldron:

I'm interested in what the geography around this cauldron would have to be. Would it be a huge crater, with massive walls cordoning off the rest of the area? A mountain range? Or maybe it's in an island chain that lies in a conflux of currents and winds that ends up dumping everything here, and then the storms just bugger off to the rest of the sea after blowing everything in sight.

This does take place on a fictional world in which a small amount of things have already been established:

Aside from these things, the world design is largely open. I'm picking plot points to make plausible first, before filling out the more generic stuff.

Use mountains to control where hurricanes go

I'm not creative enough with either photoshop or Paint to make some drawings, but imagine a world thusly: The East coast of Florida and the Carribean, except there is a tall, 4000m+ mountain range following the Windward and Leeward Islands to Puerto Rico to Cuba, and up the center of Florida all the way until it merges with the Appalachians in Georgia. Now, also imagine that the coast of North Carolina extends all the way out to Bermuda, preferably mountainous. Now look at this hurricane map. 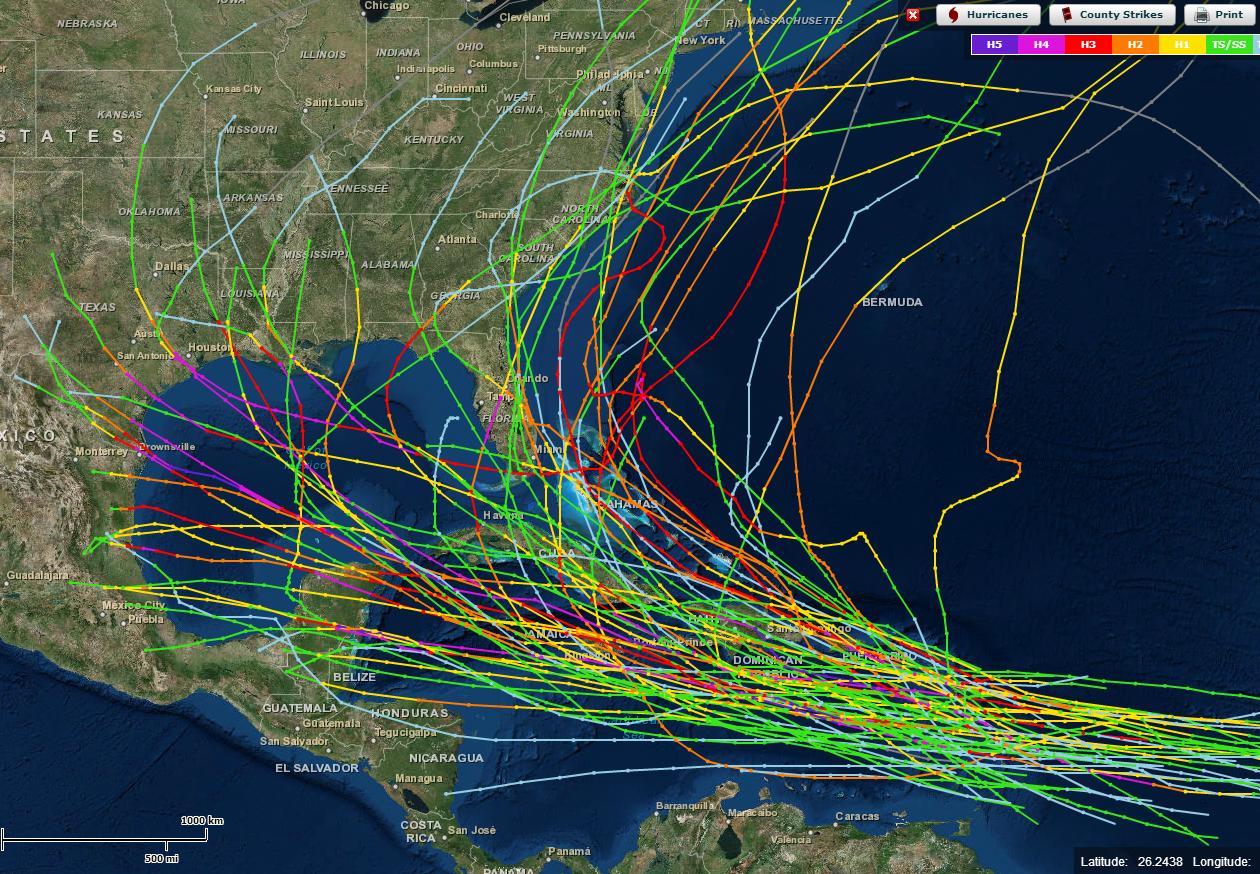 Instead of breaking across the Caribbean Islands and heading to Mexico and the Gulf, all hurricanes will track up the Atlantic coast of Florida. Then, instead of rolling back out to sea or petering out up the American East Coast, all hurricanes will slam directly into Charleston, South Carolina, and dissipate their entire energy between there and the mountains.

Now look at the plot of hurricane frequency.

The Charleston Storm Cauldron will see at least one hurricane every year, right about September 10th. In general, August to October will be a monsoonal wet season, where you expect a storm a week, or even more in the first half of September.

I'm thinking of a combination of a circumpolar ocean current, anticyclonic low pressure systems, a somewhat ptotected natural bay of your choosing and an active volcano.

The tip of South America and South Africa (and I assume New Zealand) have regular low pressure storms come through. They can be extremely dangerous for shipping, especially pre-20th century sailships and steamers. Lots of wrecks off those coasts.

The southern circumpolar current is a continous cold current circling Antarctica. The ocean current and prevailing westerly winds create a series of strong low pressure fronts. When especially strong they bring strong winds and and excessive wave heights. (Will link some images and websites later)

The storms are typically a winter occurrence when the ITCZ moves North allowing the southern polar weather to extend further northwards. However, occasionally various factors combine to allow a summer storm. These completely natural stoems are enough to sink ships on a regular basis. And already have some seasonal unpredictability that can still be reasonably predicted up to a week or two in advance (with modern weather prediction techniques. Pre-satellites and without a thorough understanding of the dynamics, your people could be reduced to a day or two warning with some storms coming out of nowhere).

Have a large natural bay facing or partially facing the prevailing storm fronts. The bay protects from local currents and winds etc but when the storms come in they are hit with the brunt of the storm forces. You can have the bay surrounded by a mountain range if you really need it (think Table Mountain and the Cape Fold Mountains in South Africa) but it is not strictly necessary if the bay is situated in the south of the landmass. The very location and extent of the ITCZ seasonal shift will restrict the storms from reaching too much further north.

Now for the volcanoes. Im not 100% certain of the logistics but it is something to consider. As previously mentioned, storms are fed by a combination of warm and cold air interacting. Preferably cold air blowing over warm water providing additional moisture to the cold air. See where I am going with this?

The volcano/volcanoes don't have to be very very active as in Dantes Inferno active. Just enough to warm up a region of polar water West of your desired location of the Storm Cauldron in the East. Then the cold westerly winds blowing over the warm water could possibly be fed by them creating even stronger storms than currently experienced on Earth.

These volcanic seamounts could be fully submerged under the water or they could be partially or fully exposed. If you want some particularly nasty storms with a high 'unpredictable' factor, have the volcanoe partially products fully exposed. This will allow actual eruptions to occur, warming up the air in the surrounding area and to various altitudes. A major eruption would push warm air kilometers up into the atmosphere. All this hot/warm air in a typically cold/freezing polar environment should cause some pretty stroganoff pressure systems to form.

The irregular and 'unpredictable' nature of the amount of geothermal heat released by the volcanoes/sea vents will allow unpredictably strong storms to occur on a semi regular basis. All completely natural. No magic or man-madeven interference required.

Storms are created by masses of warm and cold air creating areas of extreme high pressure difference. The dynamics of this eventually causes a rotational effect and there is your storm.

So your area needs to be enclosed at least partially by mountains and have a reason for this to happen intermittently. One idea would be to have a change in the prevailing wind direction bringing colder or hotter masses of air funneled between mountain ranges. So periodically storms will brew and rage for a while and then peter out until the next time mostly confined to the valley.

So most of the time it's subject to normal weather, but a change in the wind direction causes localised storms is the basic idea. You'd need to expand on it a bit. But once the storm moves out of the valley it can dissipate rapidly as it no longer has the conditions to support it.

Coming off a large flat area, hills and/or mountains will force winds to move upwards, cooling and condensing the water in the air. So my hometown in the foothills gets a ton of snow while the area in the valley gets little to none. On a larger scale, the mountain range in the north western US blocks moisture from traveling inland via this same effect, western Oregon is drenched, while east of that is very dry.

Water retains heat really well, much better than land. Which is why deserts have ridiculously cold nights, despite the hot days. There's an area in/north of (forgive me, my knowledge of geography in that region is rather poor) the Tibetan Plateau that is basically a giant bowl. The plateau blocks the moisture from the Indian ocean (causing the monsoons south of the plateau) and this bowl is very dry. Rapid heating and cooling causes massive changes in air pressure with nowhere to go, except that one narrow opening heading east. Hot air expands, air pressure increases, and hot winds come rocketing out of the narrow opening. But then night falls, the air cools, contracts, and then suddenly there's very low pressure in the bowl, sucking air at high speeds back through the opening.

Potentially, you could utilize a mixture of the above, rapid pressure/temperature changes, excess moisture and conflicting air currents can whip up one heck of a storm. Positioning it for maximum effect would be tricky and potentially require simulation software. you might find something useful here.

Not the answer you're looking for? Browse other questions tagged planets geography weather .

23
How deep must a submarine dive to avoid megastorms?

7
How do I create realistic geography?
6
Magic Ship Armor Causing Fog
7
How would a large arctic mountain range affect the weather?
6
Geography and Appearance of an nitrogen/ammonia planet
6
Aircraft that can endure high winds and storms
0
Question about climate and geography
26
Would common people in central Europe in the 15th century notice that the whole Asia disappeared?