Could a robotic exoskeleton give humans Earth like movements on a high gravity planet?

Logically a born and raised on a planet with Earth-like gravity would move slower on a high gravity planet, and would be both faster, and possibly clumsier in low gravity. In my world humanity has colonized many planets, and there are exoskeletons, similar to the ones in Advanced Warfare, that give enhanced physical abilites. Let's say there is an app that connects to the user's exoskeleton, and has two primary settings. One is the gravity the wearer is used to (their homeworld) and the other is the gravity where the exoskeleton will be used. It will automatically adjust to allow the wearer to move the way they do on their homeworld. Does this seem plausible?

EDIT: I know that high gravity could screw up a human's organs, we're talking minor differences in movement here. The average human colony world is between 0.6 and 1.3 G

Yeah, its technically plausible. Of course, an exosuit will only support your body and limbs, leaving out the more serious problem: heart might be hard pressed to keep up with pumping needs. Unless you find a way to internally/externally supplement that (and other bodily internal functions, that might depend on gravity), you will run into problems.

In a sci-fi setting this seems absolutely plausible, and there's no need to go into the minutiae of HOW it works, just make it a part of your world.

You are a new user, so if you are looking for what the possible science would be behind it, I'd highly recommend saying so, and tagging science. If you want the precise equations behind such a set up, you can tag hard-science.

But yes, right here, in the real world, NASA is working on this. Here's a link to a paper.

Currently, tech is focused on LOW gravity rather than high, just because that's what we've encountered more often. That's more likely to be developed first.

Countering high gravity will be more difficult, and will come with a whole other set of problems, but, solving it sci-fi, you're basically talking power armor.

The versatility of your exoskeleton is the most unrealistic thing about it--assuming that it will be a "one size fits all gravities." I think that's less plausible.

Yes, it can be done. We have actually built exoskeletons with a 17:1 actual weight to perceived weight ratio. This means it could let you walk normally at up to 17Gs.

However, as Michal mentioned, there are many other important effects that you will have to deal with. Our veins and arteries, for instance, are designed to function at 1G. At higher gee forces, blood is forced away from our brain, causing us to pass out. Fighter pilots have to deal with this on a regular basis, so we have developed "exoskeletons" for them which have bags that can inflate in the legs to force the blood back up towards the head. These are very uncomfortable, so I don't think you'd want to do it for a long period of time. Health issues would certainly occur.

One other solution might be to create an exoskeleton that lets you lie down while moving around. We are much better at handling gee forces in the lying down position. I've seen quotes suggesting upwards to 11G's can be handled comfortable for a bit while lying down (well, as comfortably as you can get, with your eyeballs being literally pressed down in their sockets!)

You might also be interested in this graph, which used empirical results to try to figure out how to model what a human can withstand. As you can see, there's a log-log trend to the data which suggests that we humans might not be so good at handling high gees for hours on end, even with exoskeletons. 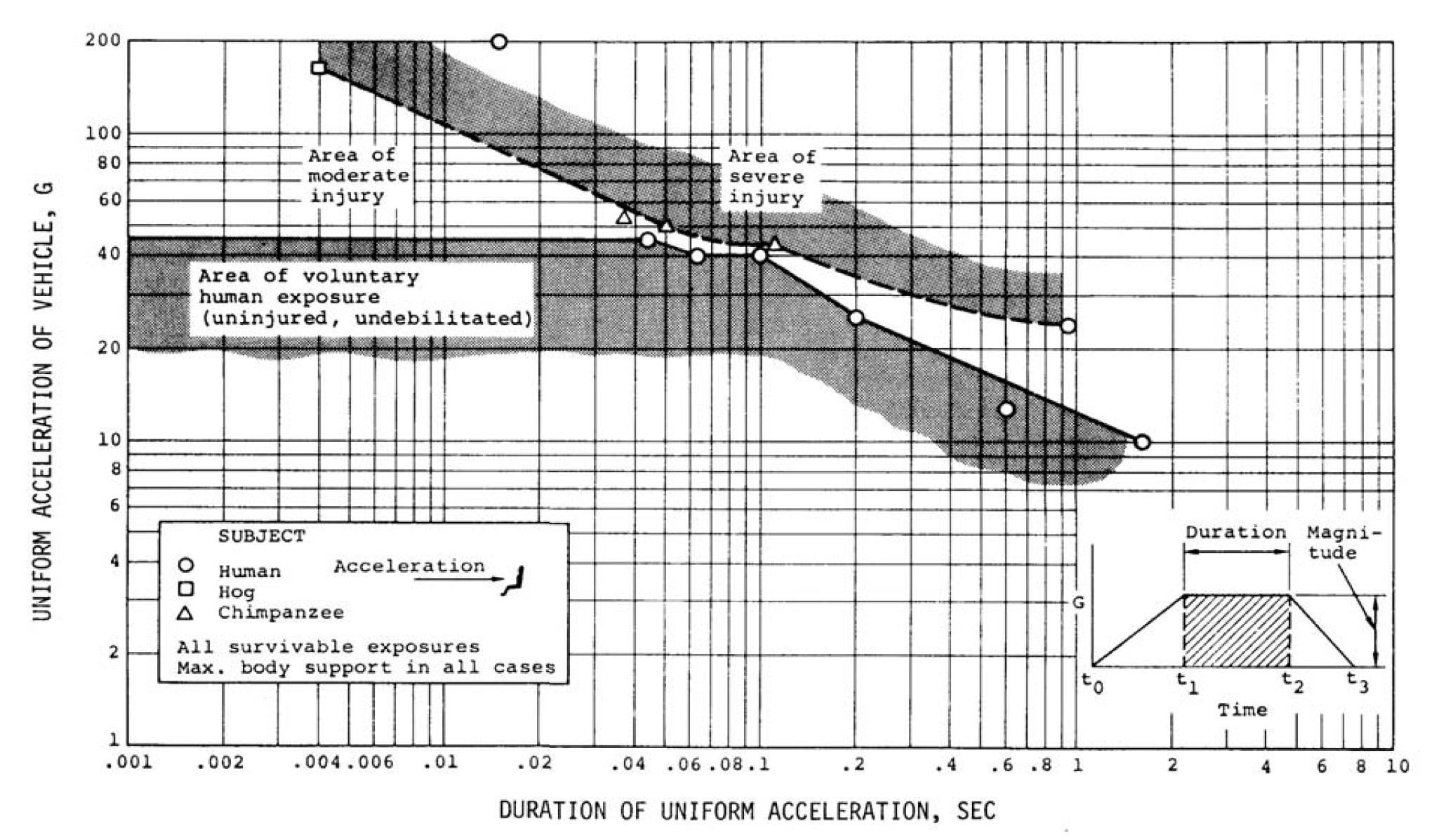 I can't recall the technical terms right now, but human motion can be divided into two logical groups: Movements that are stable throughout (you can freeze at any point and maintain that pose for some time) and movements that are only stable at the start and end but are inherently dynamic at some point in between.

For instance, when you lie on your back and make snow angels, that's a static movement. You can stop at any point and hold that position. The position may be uncomfortable or exhausting, but the point is that it's possible to hold it all for any time whatsoever.

An example of a dynamic movement is jumping. There are points in the jump where you cannot stop, for instance when your legs leave the ground. Another good example is running or jogging (because there are moments when neither foot is in contact with the ground) but not walking or power walking.

I think with these so called stable movements the exoskeleton could work. For it to feel like Earth, the resistance that a human experiences must be the same. The suit would essentially be applying force defined by Earth gravity vector minus Planet X gravity vector, so it would push upward at all times. It would need a computer to calculate how much force to apply at what joint, but that's relatively easy to do. It may or may not be necessary to "train" the suit to work with that individuals idiosyncratic movements, but I think either way is plausible.

You would probably have a range of suit qualities, with the worst being just a bunch of bare bones struts, while the best ones distribute the force more evenly on the human body, but in principle the main force that the human must apply can be made to exactly equal that which would be needed for the same movement on Earth. Secondary forces might be harder - for example if the suit is poorly constructed, there may be an excessive strain on smaller balancing muscles which resist the heavy gravity dragging the human out of the suit harness in certain position. You might make a plot point out of lower classes from Planet X having distinct but subtle muscle hypertrophy in certain unusual areas, similar to many occupational diseases associated with excessive strain on a certain part of the body.

Where this illusion of Earth gravity falls apart is the dynamic portions of movements. For example, the suit could provide a walking experience mimicking Earth, but it cannot mimic a jump. The reason being that once the jumper is airborne, a purely mechanical suit no longer has a surface to press against to apply the counter-gravity force. The motion of the jump may feel exactly like Earth, but as soon as the subject leaves the ground they will obviously fall faster than on Earth. Also, when the suit wearers step on flexible objects that they "know" would support their weight on Earth, they might be surprised to find out they are easily crushed (which could be another plot element concerning novice or careless users).

With a bit of thought you will observe that dynamic movements are very common in every day life. Besides running, sitting down, getting up from a prone position, quick turns and going up or down stairs can all have dynamic component. It might make the suit very startling to wear, since unless you are carefully trained in its limitations, you will often be surprised by abrupt and unexpected losses of antigravity force. Suppose you descend a familiar stair for the 100th time, but this time get overconfident and careless and let go of the banister - but instead of being slightly harder like you expect the movement is suddenly 10 times harder. Probably after a few weeks or months the human brain can adjust to it, but if a person wearing the suit for the first time is careless they can easily get injured or killed. The experience of learning to use the suit would probably be somewhat analogous to learning how to ice skate - while in principle it is not very hard, you do have to learn to cope with the fact that you are suddenly much more stable in some directions (left-right) and much less stable in others (front back).

If your suit is not actuated solely by mechanical means, you could correct the dynamic motions as well. One obvious way I can think of is to attach tiny jets or rocket thrusters to various limbs. You would have to carefully watch your fuel, since when it runs out gravity will suddenly increase (or perhaps the suit detects low fuel and starts gradually reducing thrust to avoid surprising you) and you could be hurt. Alternatively, some sort of magnetic shenanigans (perhaps magnets in the hip repelling magnets in the arm or something like that) could correct gravity for some dynamic motions, such as "collapsing on the couch", but probably not ones requiring loss of contact with the ground unless you want a magnetic levitation kind of technology.

I'm totally prepared to accept a machine that accommodates different gravities, but I think your app has at least one too many inputs.

Gravity is easy to measure and disastrous to have incorrect.

Personal gravity preference doesn't seem like something that would change very often either.

It might help on a high gravity world, but it is not going to be able to completely compensate for different gravity.

Things fall at a different rate in a different gravity field. Even just walking consists of repeatedly falling over until you catch yourself on the other foot. An exoskeleton can't correct for this. It's also not going to help with the problems different gravity has on the internal working of the body.

5
How to keep internal organs functioning within an exoskeleton suit in different gravity levels?

8
How could humans survive in extremely high gravity?
2
How high and far could a person jump in lower gravity?
2
Is it worth having artificial gravity by propulsion, in orbit or in “free space”?
5
How to keep internal organs functioning within an exoskeleton suit in different gravity levels?
5
Could a Giant Earth planet have lower gravity than Earth?