What if half the Earth was covered in lava? [closed]

Imagine that some kind of catastrophic event takes place on Earth, like a gigantic eruption, and half the planet ends up transformed into a hell-like hemisphere, with volcanoes and seas of lava (like Mustafar from Star Wars). 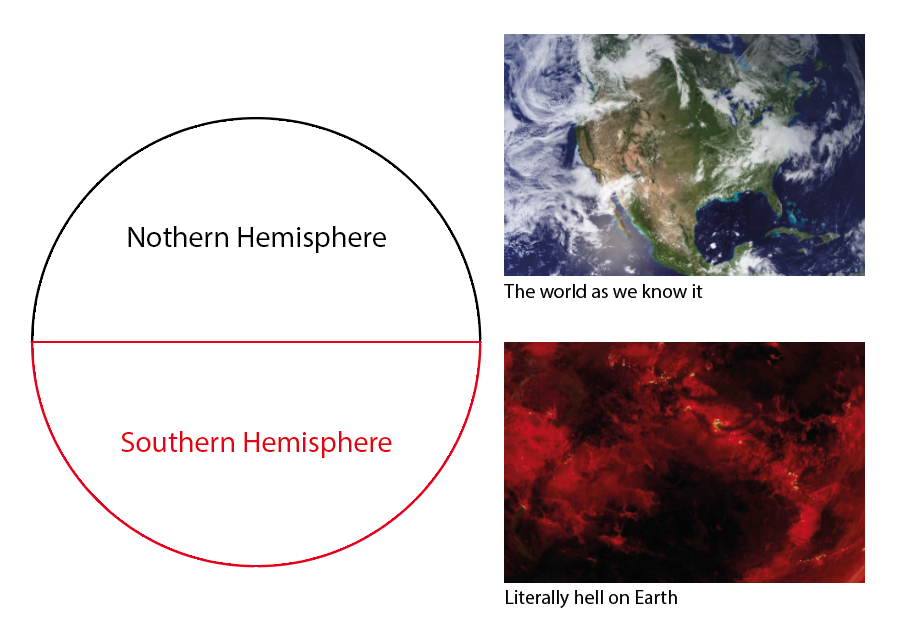 At some point, the lava would solidify forming an enormous range of volcanic rock mountains surrounding the equator, dividing the world in two defined halves. I guess that this ring would be impassable due to the high temperatures (and maybe poisonous air?) and people wouldn't even dare to get close to it.

How would this affect to climate? I've been thinking about oceanic currents, global winds, atmosphere composition, tectonic plates movement... And of course, what would be the ecosystems be like? Would we still have the same biomes with the same vegetation and fauna?

I've been chewing on this for a while and I would like what you guys think about this. Thank you very much!

OK, my bad. I've asked something too broad and big. I appreciate the feedback though. Let me fix this up a bit.

I know for sure there would be a massive extinction and the Earth would be an uninhabitable planet for eons. Please, don't focus so much on what would happen immediately but on a very, very long term (once the planet had been recovered). I think of this catastrophe as an event which has taken place in an very remote past, which no one is really aware of (since, as I posted before, people wouldn't dare to get close to the Equator), and which has reshaped the world completely.

But my major concern is the climate. I'd like to build a world with a consistent science-based explanation for its climate. I don't buy that "North is cold, South is hot" trope (I know I'm talking about southern hemisphere but please remind that cardinal direction is arbitrary). As far as I know, winds are just air currents moving between areas of different pressures, which are caused precisely by heat. One example of this is the monsoon, which I think is a really cool phenomenon.

Summing up: what would be like the climate of a planet whose southern hemisphere is a giant crater of lava. Would a single hemisphere climate system be viable? Would it be something similar to our current climate?

Thank you very much and, once again, excuse me for my broad question. My fault completely. Or maybe my question is just plain dumb. Sorry in any case.

Well, the initial event would probably kill all complex life on Earth, maybe all life depending on how neatly contained it is at the hemisphere-boundary.

Most of the Southern Hemisphere is currently covered by ocean, so to turn it into a lava world you'd have to boil that away. But the ocean is connected all around the world, so to remove the ocean from the Southern Hemisphere you'd have to remove all the ocean - which would make the earth uninhabitable (both from lack of water and from the boiling oceans steaming everything on land to death).

So you wouldn't get much of an ecosystem, or even an 'Earthlike' hemisphere. At most, some endolithic microbes would survive, too deep in the rock to be steam-boiled and using underground water supplies unconnected to the ocean.

However, you could probably get a situation like this if the Earth was re-terraformed after the event (say, by people in colonies on the other planets/asteroids with samples of Earthly life - maybe they knew the disaster was coming in time) but that re-terraforming is so far limited to the Northern Hemisphere.

If the equatorial ring of volcanic mountains was high enough, it would shift the global wind patterns dramatically - the Himalayas do. probably winds in the northern hemisphere would be mostly contained to it (even now, the 'equatorial doldrums' somewhat separate the wind patterns of the two hemispheres).

Ocean currents will be limited to the Northern Hemisphere too; either the Southern Hemisphere has no ocean, or (if the lava has cooled to volcanic rock by this point and enough water survived as steam to re-condense into oceans) the two hemispheres' oceans would be totally separated by the equatorial mountain-ring.

Not the answer you're looking for? Browse other questions tagged science-based environment climate geography or ask your own question.

6
What would the climate be like on an earth-like planet with only one convection cell per hemisphere?
4
What would happen if there was no Antarctic Landmass?
5
Would there be monsoons in a planet without axial tilt?
10
Can a planet with only one pole cap exist?
3
How can I explain the geography and climate of my planet?
13
Are these climate zones somewhat realistic?
2
Does my climate map work?
6
Is my biome/climate map realistic?