Following in the vein of super-villains with problems...

I am an anonymous villain (the best in my world), and have recently bought some new land and am in process of building on it with the intention of making it my main residence.

This land is in the form of a peninsula, and I own the "island" part, the "straight/connecting" part, and a few hundred square metres of the mainland.

The "connecting straight" is quite a few kilometres long, enough that the island part is decently separated from the mainland. At its widest part it is over a kilometre, and at its thinnest it is around 300 metres. Also, the "connecting straight" is not totally straight, at one point it has a 45/50 degree turn. It has a few trees and/or bushes, but is not thickly wooded. There are also a few rocks strewn around.

Now my problem is, how to prevent access without making it obvious? Obvious in my mind is men traipsing round the place toting guns. I don't want anything less than military (say a few tanks/people carriers) to be able to access.

I will have a fair few visitors, which would fit into two categories. The first is the "hires", men which I hire to do my dirty work. These would arrive via land. Second would be important people I invite (such as the president, who believes me to be a good guy), which would mainly arrive via my yacht, picked up from the capital.

The capital is about an hour or two boat ride away, and the area around the island/peninsula is very sparsely populated.

So what can I do? Looking for suggestions that are within the realm of possibility in this world (as mine is almost a mirror copy), but can be very technologically advanced, and money is of no object. The time is present day, or a maybe a little in the future if it helps.

Make it a crocodile reserve

Team up with some local wildlife preservation people and turn the connecting part into a reserve for endangered crocodiles. Breed them in your personal crocodile farm where you get them used to the taste of human flesh by feeding them mostly with captured spies and incompetent henchmen.

Anyone stupid enough to ignore the signs will get attacked and eaten. Any official investigation into their demise will come to the conclusion that it was their own fault.

Now how do you get your hired goons safely through the crocodile reserve? Crocodiles have a wider hearing range than humans, so you could hide some noise generators in the reserve which drive away the crocodiles by emitting noise in frequency ranges which are inaudible to humans. Someone who knows where the noise generators are hidden can travel along that safe path.

When your climate zone doesn't suit crocodiles very well you can substitute them with snakes, tigers, grizzly bears or polar bears.

I also hope that no spy will figure out how to sabotage your noise generators, or your personal army will be attacked by a hoard of hungry, man-eating crocodiles, which is bad because some of your beloved crocs might get hurt or overeat.

Dilution is the solution to pollution. Hide in plain sight. Open a big wide road. Set up a widget factory. Do some ecologic remediation. Reach out to local vocational schools and offer employment to the underemployed country folks. Have your picture taken with the graduating class.

If someone (besides swanky guests by yacht) wants to come on to your property, have your PR people welcome them with open arms. Tour the factory where you are making widgets. They are not fancy widgets but they widg with the best of them, and they are home grown!

If people ask why a vain supervillain is content with a widget factory you can answer that you are not: that you intend to open 3 more very soon because the first has been so successful. If they ask why you are not trying to take over the world, point out that what you really want is to help the world and what better way than to offer education and employment to the people. Hint that you may run for governor!

People will get overwhelmed with the banality very quickly. Plus if your evil scheme falls thru you have the widget operation / governorship to fall back on.

I think in general you are over thinking it.

How do rich people keep people away from their private property in the real world?

Have a fence with no trespassing signs posted, including an access gate.

Inside this perimeter fence have sensors (cameras, thermal, motion, etc.) to detect intrusion. A distance back from the fence (far enough away that it is not visible from the fence) have roving guard patrols to round up trespassers who pass the first perimeter.

On the ocean side have signs on your dock or on buoys again stating that it is private property and no trespassing is allowed. Again have remote sensors in place to detect violators and a patrol boat to stop people from landing.

None of these security measures would be that outrageous for a privacy oriented rich person with a large private estate.

You should also cultivate a positive relationship with the locals, including the police force. These are the people most likely to notice anything unusual, they are less likely to say anything useful to outsiders if they enjoy some benefit from your residence. "Oh that's just old man Jones estate he likes his privacy, nothing to see out there."

Most intruders should be caught and removed before they can even get close enough to observe anything unusual, turn them over to your friendly local sheriff (who really appreciates the new patrol car you bought them) and have them charged for trespassing.

Place a large waste water treatment plant on the mainland bit of the property, or on the narrow bit of the straight.

It'll generally smell awful in that area, which will deter regular folks from dropping in without a good reason to. Nobody gets particularly curious about where their toilet water goes, and even fewer people really want to investigate it further.

"Waste water treatment plant, move along nothing to see here"

"You don't have to tell me twice."

Fake a nuclear accident. That is the only thing that keeps humans away. Doctor Doom’s secret base on a south pacific atoll has been undisturbed for 60 years, and nobody has visited Volkovich “the awful” in 40 years. 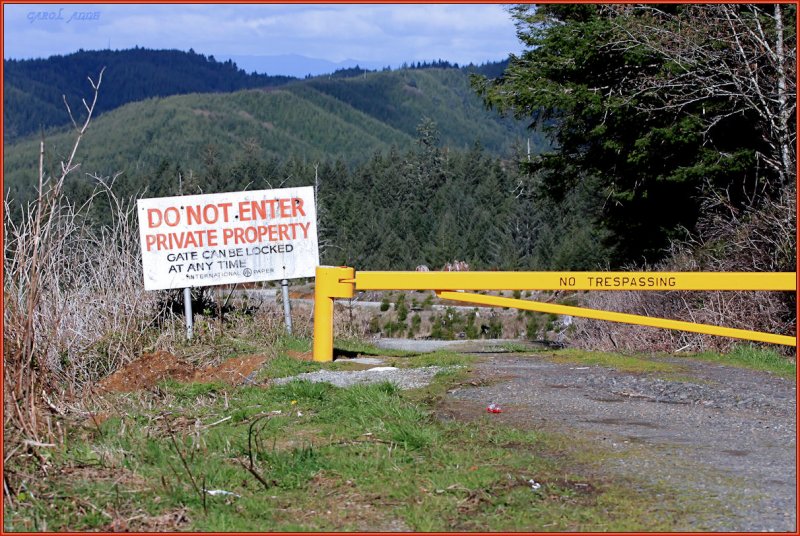 Whats wrong with a gate? Just toss up a gate and most people will stay away. Add some barbed wire and even adventurous hikers will keep out.

Anyone foolish enough to pass by your gate will have to deal with your henchmen/attack dogs/explosive robo-snakes.

A single lane road down the center and copious amounts of landmines.

Closer to the front door of your place you can have a check point with your standard military stuff to check on the vehicles. Having a single vehicle with guards patrol the road will ensure no one is dumb enough to walk in unannounced.

If you want to make it a little bit better/safer for lost pedestrians a scary rusted gate and some quarantine signs wouldn't hurt keeping strangers away.

I also like the option of pretending it is a wildlife preserve of some kind where humans aren't allowed because of some made up endangered species being repopulated there.

31
How would an army defend itself against mass robo-snake attacks?

6
Possible explanations for a world with hard to access metal deposites?
10
Preventing the instantly lethal zombie bite
26
Could a civilization without access to computers have cryptography?
10
Preventing Blindness from Microgravity
3
Preventing the dispersion of a particle-beam behind the target
1
What is an easy to access or make/extract poison
7
Externally monitoring CPU/SSD activity without software access
0
Internet access at GEO