Is this circumbinary planet set up in a stable manner?

This is the ideal set up for my solar system:

EDIT
It's been pointed out that this is not a stable set up, so I want to clarify that everything in this set up can be changed at will to fit my planet. The only thing that's essential is the size, gravity and temperature of Enkei as it needs to support the fauna in my world. Yaima is intended to be a planet but can be a moon.

Firstly, I have no idea what the most suitable orbit distance is for my binary (P-Type) Star but I found the minimum distance to be 0.11AU so 0.2 seemed a good guess. Obviously, I need a stable System before I can even begin to populate the world so this is the most important. Worst case scenario I can scrap the binary and just tweak our solar system accordingly.

292 kelvin is the maximum temperature I want for my planet as it effects climate and evolution. Since I couldn't find anything concrete for calculating the relationhip between temperature and atmospheric density, I plotted the disparity between expected temperature and actual temperature for Earth, Mars and Venus alongside the atmospheric pressure (1, 0.006 and 90, respectively). using this scale predicted my Planet's temperature (12x Earth Atmospheres) to be 60-80% of it's actual temperature and because the albedo would be similar to earth, this then gave me an orbit distance of roughly 1.74AU which is just outside of the habitable zone. That makes the expected temperature the same as mars but an atmosphere 12x stronger would provide a considerable buffer and an Earth-like landscape (i.e. Large Oceans) should help regulate temperature.

If that seems inaccurate, Is there an equation for temperature and atmospheric pressure? Or is anyone able to calculate a more accurate orbital distance that would keep the planet at around 19°C?

Bear in mind that distance affects year length. My current set-up allows 32-hour days for 539.751 days in a year, which is 540 days a year -1 every four years except for the start of new millenia.

I tested your scenario using Rebound, an orbital simulation package with a nifty python interface. If you want to see the code I used, it is available on my github here.

Here are the numbers I used for my first run:

In addition to the numbers you provided, I just threw in some eccentricities to see if it worked.

The simulation ran for 1 million Earth years. I only included Enkei and the two stars in the simulation. At a distance of 0.2 AU, Ignis did not do much to disrupt the orbit of Enkei.

The maximum variation that I saw in the semi-major axis of Enkei in those million years was about 1.7%; this variation was somewhat random, I was unable to plot any patterns for it. There are definitely some interesting orbital harmonics going on, as you can see in the graph below: 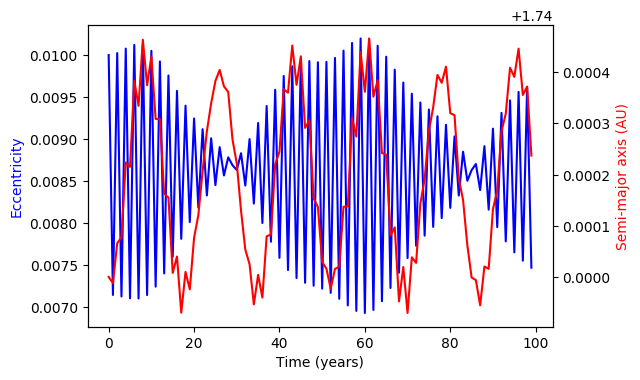 I broke the semi-major axis graph out onto a longer time scale. 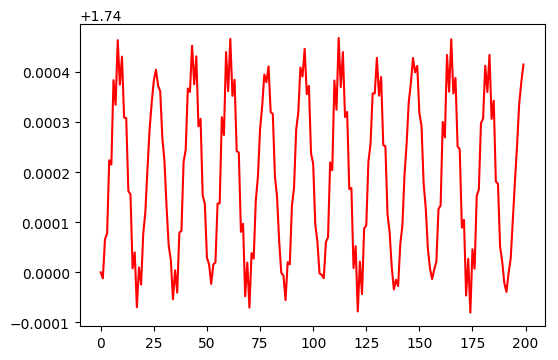 So these are some interesting orbital dynamics. The eccentricity changes will cause your planet to basically alternate hot and cold years with about the same variability we see on our planet year to year. The semi-major axis changes will be more significant, causing up to a 3.5% change in insolation on around a decade time span. That is enough insolation to produce noticeable, several degree C changes from warmest to coolest.

So, without accounting for any of the other planets, the setup listed above appears to be stable, and has some interesting orbital characteristics to boot. Just to be clear, numerical simulation, no matter how advanced, cannot prove stability for an n-body system, but it can suggest that it is likely.

If you want to add mass, semi-major axis, and eccentricity information for some of the other planets, I can add them into the simulation.

When I get some more time, I will update this question with insolation graphs, as I did in this question. Hopefully, this will help determine what the planet's seasons and average temperatures will be like, and shed some more light on the orbital harmonics.

Not the answer you're looking for? Browse other questions tagged science-based reality-check planets astronomy orbital-mechanics .

23
Is it possible to have a sun with visible phases or cycles?
27
Can you add a mini moon to Earth?
7
Season cycle that would occur on a habitable planet that orbits two suns?
0
A new approach on multi-star solar system

1
Would animals from Earth be able to survive and reproduce on this planet?
0
Would this Planet be habitable for humans
10
How would this tidally locked planet be affected by its moon and would the moon have a deaccelerated orbit?
4
Could humans colonize this planet?
5
What would the temperature variation be on this planet? (High eccentricity & slow rotation)
3
Feasible star + planet + moon combo? Did I miss anything that makes this system wildly unstable or otherwise impossible?
6
What star can give an earth-like planet a 1-day year?
5
Sunrise and Sunset In a Ternary/Trinary Star System
3
Is this fictional habitable exoplanet of Alpha Centauri A realistic?
4
How plausible is this planetary system with binary stars?