How high can a city be built on a mound in a flood plain?

This is a followup to this question about city building on flood plains.

There is a civilization that developed along the rich varzea flooded forests of an enormous rainforest river, larger than the Amazon. This civilization is dispersed into many tiny villages practicing seasonal agriculture and fishing; almost all transport through the forest is done by boat. There are great trade centers at the crossroads where the rivers meet in the dry season; because of the 15m flood levels, these centers are built on raised mounds so they stay when the wet season turns the forest into a giant lake.

The mounds are built piece by piece first by driving logs into the damp earth in a ring and filling with dirt. As cities get wealthier, they can afford to purchase and transport stone blocks from the mountain kingdom to the south. The blocks are used to form an outer ring around the city mound. The Earth inside the blocks is compacted by constant use, and occasionally filled by hammering pilings into it to support new buildings.

Available building materials include the basalt blocks from the south, Gaudua bamboo from the nearby forest, and, most commonly, timber from tall palms. Other building materials that can be found in the Amazon or Congo rainforests can be assumed to be present. Bronze tools are not made locally, but can be imported for workmen, and otherwise technology is Bronze Age.

Building a mound is obviously time- and resource-intensive. These cities are flourishing, but space is at a premium. The logical recourse would be to build up. My question is, given the wetness of the foundation and available building materials, how high can buildings on these mound cities be built?

The Dutch historically faced a similar problem and came up with a nearly identical solution: terps.

The village church would be the obvious building to build on a terp, it can typically house every person in the village (it already does this every Sunday) in case of a flood and is very sturdy (well, the ones that are still around today) to survive a storm.

From my experience, I estimate that it's not uncommon for these churches to be around 30 meters (100 ft.) tall, with some well in excess of 50 meters (160 ft.). (Your average church on a terp. image)

Something that typically happens nowadays, in order to build skyscrapers, is that buildings are built on piles that are driven deep into the ground for stability. However, there is some evidence to show that this solution has been around for thousands of years. 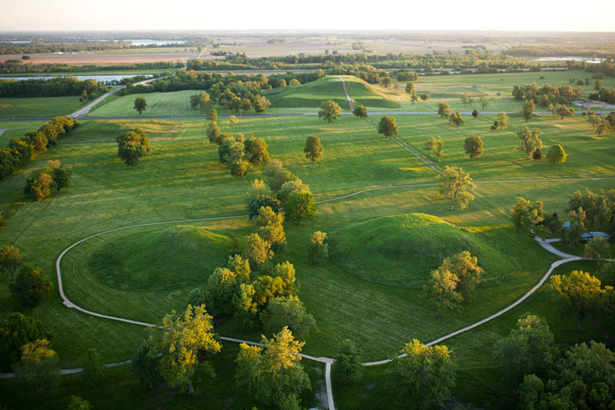 I am glad this premise is back. I have been thinking about it.

@Swier gets the vote for terps, which I had not heard about. But my bedtime reading lately is about the Mound Builder society, which existed in North America approximately 1000+ years ago. Above is a pic of the Cahokia Mounds site and there is the Mississippi in the background. Floodplains are nice and fertile but you need high ground when it floods. I have never read that these mounds might be anything other that analogous to to pyramids. Now it seems obvious: they are terps.

The big mound (Monks Mound) is 30 meters tall. There is enough space on top to build as big of a Beowulfy longhouse lodge as your tech will allow. A good thing about this is that you do not need stone at all; you can use wood. The bad thing for your folks is that it floods deep where they live every year and the mounds took years to build. It would be a scramble to get one big enough up during one dry season.

Here is the last shot from the movie From Dusk to Dawn, which features a seedy Mexican bar that turns out to be loaded up with vampires. At the end of the movie the aerial view shows that the bar is the very top of a buried Aztec pyramid. Best thing in the movie. 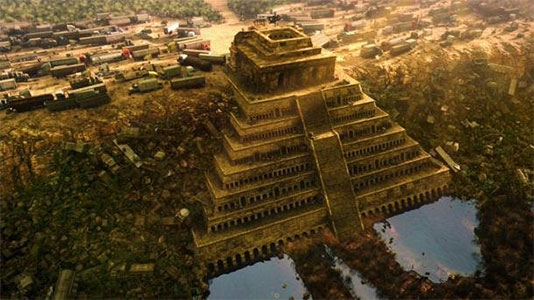 Maybe there is something solid underneath where your folks live. Cyclopean prehuman ruins are always a favorite of mine. They can discover it when a statue of something is seen poking its head up thru the mud - on trying to retrieve it they realize it is attached. In any case - a firm spot, and your people build on top. It is not always safe to build on top of ancient ruins which extend an unknown distance into the ground, as we learn in Conan and the Flame Knife But with a solid footing of some sort they can build on stone, the ruins serving as the pilings.

Not the answer you're looking for? Browse other questions tagged science-based earth-like construction engineering .

32
What do you make bricks out of in the rainforest?
20
Living in a Giant Swamp - Construction
10
How to build a floating farm?
5
Can a city in a flood plain be maintained for centuries if it is built on stone blocks?

6
Vertical City - How High?
4
How fast can giant underground shelters be built?
10
How to build a floating farm?
5
Can a city in a flood plain be maintained for centuries if it is built on stone blocks?
25
Could a city be built out of Balloons?
7
How high could a Lego tower be?
5
Self-sustaining Mars colonization
32
What do you make bricks out of in the rainforest?
14
Towers in the ocean; How deep can they be built?
5
Plausible design/size of flying cities?