Could a post technological community survive without trees or animals

So I am envisaging a community trying to survive a mostly global disaster without any non human animals and no plants larger than bushes.

What could be used for tools, clothing, food, fuel?

Would it be possible even with significant hardship to survive? I am thinking of somewhere where agriculture is marginal, so plants can be grown but with difficulty. And no machines would be available to help.

Millions of people do exactly this. It is subsistence farming 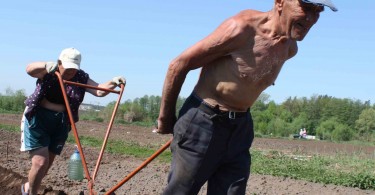 Vegetarians survive. Grow peanuts. Grow potatoes. Grow strawberries. Grow peppers and tomatoes. Pollination will be an issue for some plants without insects: have the kids hand pollinate your vegetables. Grow wheat and corn: grains are all wind pollinated.

I am wondering how crop yields will improve in the absence of any sort of insect, bird or animal pests.

No bacteria could be a long term problem for soil. Fortunately each human carries plenty of bacteria with them and these bacteria hit the ground running, especially if you are living on vegetables. Lack of soil bacteria will be quickly corrected.

This means you need to self pollinate your plants, by hand most likely. But with no machines and no beasts of burden agriculture will be an issue.

I foresee at best small pockets of highly advanced colonies. Probably using hydroponics or something similar to survive. Completely cut off from the regular world in that regard as the world has nothing to offer with no insects, moles or worms.

If that tech level isn't available we still need highly educated people. To understand why regular farming doesn't work. You need highly educated smart farmers to manage something that brings in enough food. Still I see the majority of the settlement being tasked with just food production.

At best our entire civilization collapses and we're reduced to desperate survivors. At worst we simply die out as it takes us to long to adept to this new world.

Your oxygen production will tank obviously but there will be enough stored in the athmosphere for millions of years. A bigger problem is fertility of the ground. With no bugs and bacteria we have no decomposition, no rot. Organic material isn't broken down into new fertilizer. Eventually the ground turns dead.

Eco systems of smaller plants would collapse as pollen and seeds are no longer distributed by fauna. Low diversity ecosystems would form with all their issues. So could we survive? Probably, technically. But it will be hard and unlikely.

No, there would simply not be enough biodiversity.

Ecosystems are very complicated. There would be no insects to break down biomass from corpses. Likely, the bacteria required would not be able to spread either.

There would be no aeration of soil, no pollination, insufficient fecal matter to keep the soil rich, as previously mentioned, no bacteria, no gaseous emissions from the breakdown, no enrichment of the soil through microbes either.

This is of course, not even mentioning the symbiotic nature of much plant life either. Certain seeds can't germinate unless they've passed through the digestive system of an herbivore, or in some cases, omnivores.

The bushes wouldn't last long, and neither would the humans.

First, I assume that by 'no animals' you mean animals big enough to see. If you remove the micro-organisms, then there is a big problem. But as long as you allow the various soil bacteria and nematodes and such, then no big deal.

Some people say pollination will be a problem. This is completely wrong: let me explain. First off, the biggest staple crops in the world (rice, beans, wheat, maize, soybeans) are wind pollinated. Second, root crops and leaf crops do not need to be pollinated to produce the parts that we eat; and many of them do not need pollination do produce seed (though that is nice for genetic diversity). Third, many of the domesticated hybrids are self-pollinating. This was a crucial step in domestication, and it is not a modern phenomenon. Triticum durum or Durum Wheat (used for couscous and pasta) is the first known agricultural hybrid and is first attested about 7000 BC. So not only do we have self-pollinating hybrids now, but producing them is not super hard. And fourth, many tree-like domesticates are propogated by cutting or grafting; such as olives and bananas.

Another objection is that some people say worms are important. This is again not true; worms are important for mixing up the soil layers. This is something that can be done with a hoe, if needed. The actual breaking down of organic matter in the soil is done by microbes (in the worm's gut) which can happen just as well in the soil...or a compost heap.

For tool, stone and bone work great. There aren't a lot of animals with bones, but humans have plenty. As long as there are shrubs, you can make some smaller wooden tools as well.

For clothing, cotton and linen (from flax) work fine, depending on the climate. Cold climates will be bummer without wool and hides, but you can just layer on the linen.

For food, you have grains, pulses, oilseeds and leafy vegetables aplenty.

For fuel, you still have bushes to burn, and there are plenty of coal mines around too.

Not the answer you're looking for? Browse other questions tagged survival food or ask your own question.

6
Could Human Civilization Survive Hypercanes?
3
Could humanity survive on a single food source?
3
What are the building materials, crops, and livestock my post-apocalyptic community needs to survive?
7
How long could an alien species survive at sea?
5
Could humans survive off a single food block
5
Post-Apocalyptic Earth. Escape from Warehouse Moon
2
How could primitive tribes survive in the post-apocalyptic Grand Canyon?
8
Could a human survive for up to 2 years entirely on these foods without severe malnutrition?