Living on a Giant Tree - Animals

This is one of a series of questions centered around living on a giant tree. The setting/scenario is described below:

In my fantasy world, elves live on a giant tree, very similar in structure to a Banyan Tree. The elves live on the branches of this tree, which average ~300 feet wide. The tree itself is wide rather than high, only extending 600-1000 feet up. The branches are supported by massive aerial roots, as they are in older banyan trees. The elves can descend the trees to the massive fog-covered swamp below, but rarely do, meaning they have to live off of the tree entirely.

This question deals with the animals that might live on such a tree. In an answer here, @apaul34208 mentioned that redwoods have been known to create bog environments high in their branches, supporting mollusks, crustaceans, and other animals. If a mollusk can get up there, what else could?

What kind of animals could one find on my giant tree?

Anything that can fit in a tree can be in a tree. Birds, mammals, reptiles, amphibians, crustaceans. Maybe not fish. 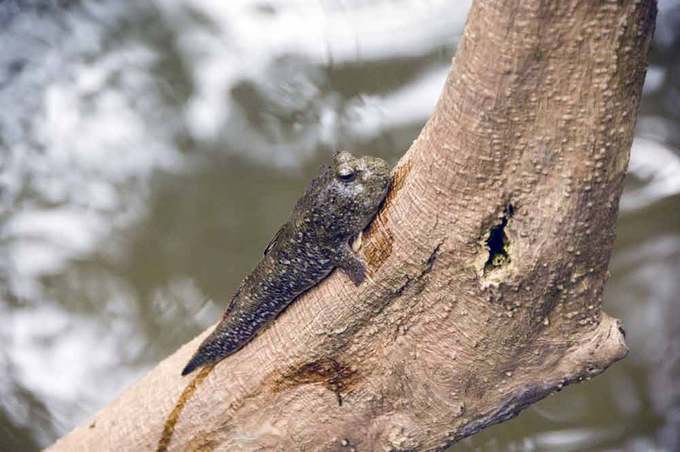 I am not sure how Muddy Mudskipper here (from https://laurennalls.files.wordpress.com) will contribute to the story but it is a fish and it can climb trees.

Re your horse equivalent: I propose orangutans. 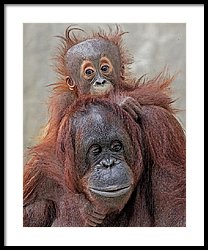 Orangutans already carry baby orangutans thru the trees. Scale up your orangutan until it is big enough to carry your elf. Plus you could have them be semi-intelligent, which is good for the story.

At every right turn, the riding elf must declare "Right Turn, Clyde". https://www.youtube.com/watch?v=i98QrSSHxo4

Last: spiders. I was thinking about sleeping in a tree and thinking about how the mosquitos would chow down on my tenderness. But what if the sleeping area were surrounded by spiderwebs? These are just regular little spiders, no Shelob business. You lift up a branch and move some webs out of the way, climb in and sack out. Mosquitoes that smell you and head in for a sip encounter your leggy friends. Everyone wins!

Like you said above, monkeys would be a good option. Obviously all sorts of birds, bats, bugs, too but that’s the easy stuff.

OK, so you say a monkey could get up the trunk… but a horse can’t. Hmm. How far up is the lowest branch? Are there knots or other ridges in the bark that could be used to gain some purchase?

For the horse replacement, I’m thinking somewhere along the lines of He-Man Battle-Cat. Cats, especially big ones, are often fairly decent at ascending trees, though I don’t know how they would fare on your giant one.

Another option might be some crazy variation of… a sloth. Yeah, naturally they’re not very fast, but maybe they evolved, or the elves found a way to motivate them.

Just how fantastical is your tree? If it’s not too far fetched, and your elves aren’t too heavy, you could pull a Legolas and have giant hawks as your mode of transport. That might be a little far-fetched.

You could possibly say that an ibex or two might have been able to find a way up the trunk. They’re very surefooted mountain-goaty things, so maybe they could work as a horse replacement.

Finally, what about not having a horse replacement at all? I know you said “there’s no way…” but what if the elves did devise a way to bring horses up from down below? A system of pulleys and ropes? Crazy, but possible, I guess. And really they’d only need a few breeding pairs, so altogether not impossible.

Based on what you have said something like a mountain goat would be your best bet. They have been domesticated and live in a wide variety of environments. They could easily get into the trees. Just breed them for size or make your species a little bigger than normal and you have your pack animal. 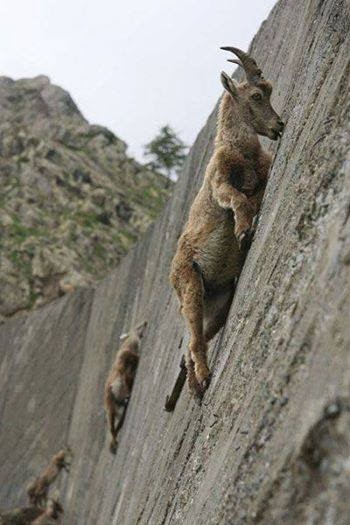 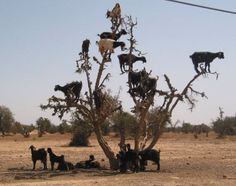 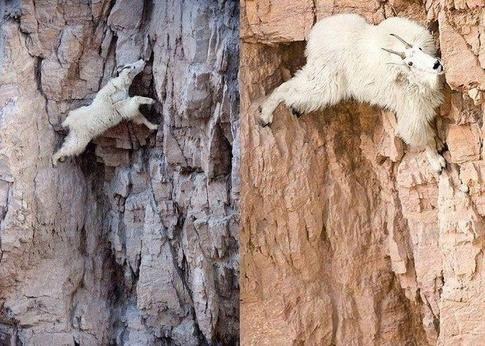 Not the answer you're looking for? Browse other questions tagged environment fauna .

6
Biological and ecological considerations for a giant worm
3
How does an Alien world have Earthlike creatures?
5
Living on a Giant Tree - Resources
9
Living on a Giant Tree - Houses
13
What sort of water sources could occur in a world tree?
6
What tree type grows into the most dense forests?
2
Mega fauna and flora on a super earth
6
How could an efficient respiratory system evolve for giant arthropods?