Capital of British Empire without Britain

It's around 1895 and the British Isles have fallen to a communist uprising. Or sunk underwater. Or invaded by Germany or covered in ice or something. So the government, the Royal Family and a large part of the population has been successfully evacuated to the colonies. The Royal Navy is still intact and still the largest in the world. The British Empire is still the largest Empire in the world. But what I'm wondering is where would the capital be? Singapore? Ottawa?, Bombay?, Cape Town? And how much of a world power would the British Empire be without Britain?

The new capital should preferably be somewhere in a strategic position and not some isolated place just waiting to be annexed e.g. Gibraltar or Hong Kong. 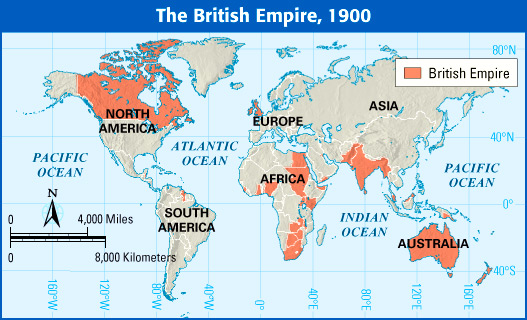 The choice of site might depend on why Britain fell.

If it was war then they might relocate to be with allies to continue participation - France was allied with Britain in the Crimean war and WW1 and would be a logical choice if they were allies again in this war.

If it was a domestic uprising and other European nations were at risk (which I think would be the case if Britain fell to communists) then Canada makes sense - adjacent to a strong ally not interested in annexation.

If the ice sheets are coming then not Canada and probably not France. India was the jewel in the crown of empire and toasty warm.

If it was zombie armageddon sweeping the continent and British Isles then I pick Iceland for its defensibility and proximity. And hospitality.

This answer is not going to make a lick of sense once you amend your question to specify the reason for the fall.

Evacuation from the entire country would only be a very last resort. However it is a given in your story, so we will work from there.

It's around 1895 and the British Isles have fallen to a communist uprising. Or sunk underwater. Or invaded by Germany or covered in ice or something. So the government, the Royal Family and a large part of the population has been successfully evacuated to the colonies.

Here are the limitations as I see them:

I can't seem to find any times given for a route between Britain and each of the colonies so going purely off distance I would say Egypt or India (though both routes offer tactical ambush points for pirates). These both satisfy the condition of being positions we want to keep. India was a hub of trade, used to British rule and tactically important for relations in the region. Egypt is home to the Suez canal - a real turning point the world trade.

I would, therefore, choose either Cairo or Bombay as the new capital. Whichever you choose has its own benefits. India has been used to British influence since the East Indies company in 1600 and was much less opposed to further rule than Egypt was. Integration here would have been much easier...however the flip side of this is that, if we choose Egypt India is more likely to stay within the Empire and the new influx of British people could turn the tide of Egyptian rebellion and thus retain the larger empire.

I would choose Cairo, but there are so many factors it really depends how you want to play it.

They called India the jewel in the crown for a reason: it generated far more income than any of the other colonies. In a situation where the Empire is at risk of collapse, you want to hold on the the biggest asset, especially since the other ones have the same ethnic majority as the homeland, thus are less likely to leave.

So why Calcutta? Well, it was the centre of the British Raj from Clive onwards until about 1920 when they moved to Delhi, the traditional capital of northern India. All the infrastructure of government was already there, so it would simply be a question of moving in.

Delhi would be a major contender, as it was historically been considered the centre of any north Indian empire for at least the last 800 years. Placing the capital there would be an announcement that the British were there to stay. The problem is that the Raj, unlike previous rulers kept themselves separate from the native population: colonists, not rulers. Placing the government in Delhi would only happen if the Raj were ready to "go native".

I think evacuation would never be successful, British Empire was too widely dispersed, you couldn't move everyone to India for example without a strong home base supplying the move.

More likely scenario if it fell to communists is counterattacks until they were destroyed rather than meekly running away.

If somehow your scenario could evacuate then I think India would be their best base. It was a rich fertile land used to British rule with experienced and competent British Armies.

Not the answer you're looking for? Browse other questions tagged alternate-history politics strategy logistics geopolitics or ask your own question.

6
“The American British Colonies Support Great Britain in the War Effort!”
3
The Ice-Free British Isles
2
What economic effects would magically-enforced isolation have on the Victorian age British Empire?
1
How to prevent allies from acting in an organized manner?
4
What are the pros and cons of a client state based sci-fi empire?
14
Moving the US capital to the Midwest before 1900?