Would an aircraft that uses assisted takeoff and water landing be realistic?

Assisted takeoff is one of several technologies that can possibly boost efficiency of aircraft, as said:

Listen to the changing sound of engines during flight and it’s obvious: an aircraft draws on its power reserves more during takeoff than at any other time. The power needed to take off is determined based on a number of factors - including runway length, wind speed, temperature, and the weight of the aircraft itself.

However, this takeoff power only is required for a very brief portion of the total flight. Once cruising in the sky overhead, an aircraft doesn’t need as much to maintain altitude. So why not source the energy required at takeoff from an innovation installed on the ground? Can the burden (and weight) be removed from the aircraft itself?

An assisted takeoff – using some form of propelled acceleration – would mean aircraft could be lighter, with smaller engines consuming less fuel. …
(source: http://www.airbus.com/innovation/future-by-airbus/smarter-skies/aircraft-take-off-in-continuous-eco-climb/) 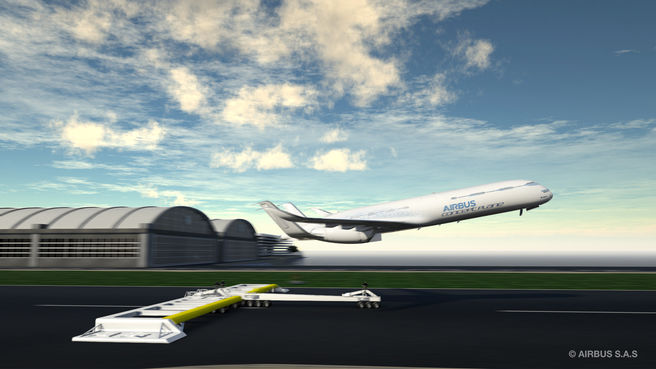 Nevertheless, in a later part of the article, they suggested using normal landing gear or similar cart also for landing. However, I started to wonder, because such cart can be somewhat hard to land on. Technically speaking some cases a different place was being considered as much more forgiving: 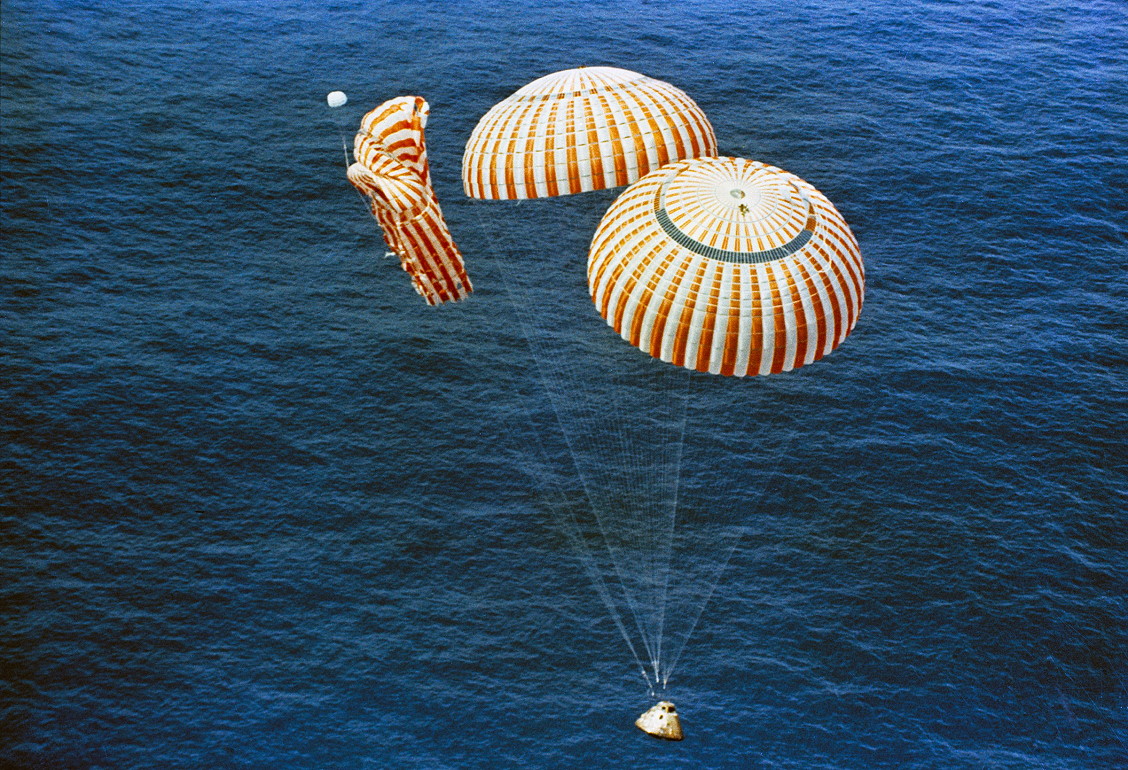 (Original image source may be http://www.spacefacts.de/graph/drawing/drawings2/apollo-15_landing.jpg)

So I want to combine those two ideas. Would an aircraft that uses assisted takeoff and water landing be realistic? (I am especially asking whether water landing would provide some weight savings, instead of carrying whole landing gear. By realistic, I ask whether it would provide any saving in weight in comparison to landing on ground.) I assume that aircraft would have engines high enough so their contact with water would not be an issue. I also assume that hauling this aircraft or getting compatible infrastructure is not a problem.

Water landing is going to introduce a number of problems and complications. You can do it two ways with an aircraft: via pontoons like a float plane or by a specially designed hull like a flying boat. Float pontoons are going to introduce a massive amount of drag (and lots of associated fuel use) because they won't be 100% retractable no matter what. A flying boat type hull will also introduce some aerodynamic compromises because of the need to shape the hull to handle hydrodynamic loads at landing speeds and be stable on the water. In addition to this, the hull will have to be made stronger, and you are going to add costs in terms of issues like corrosion protection, dealing with water ingestion in engines, etc.

Generally, it would not save anything to use water landing with this concept... EXCEPT that there is a potential use for this.

There is a known aerodynamic effect of flying at low altitude over the ocean. Air is denser, lift is increased, and an aircraft needs to expend less fuel and requires less aerodynamic surfaces to stay in the air. This "ground effect" has been exploited with some interesting designs like the Russian Ekranoplan project. Boeing had a concept a few years back to build a massive cargo hauling flying boat designed to take advantage of "ground effect" to radically lower the cost of airborne cargo.

If you are using ground effect for most of your trip, then the costs of a "flying boat" hull in terms of weather and corrosion proofing, structure, and aerodynamic compromises becomes well worth it. Such an aircraft could definitely take advantage of a ground-based "assisted takeoff" technology of one type or another. If these were combined; the cost of aerial transport could be RADICALLY reduced.

One warning: it is always very complicated to engineer something to be able to operate in two different environments (air and water) AND ocean going aircraft have always been very much subject to bad weather at sea causing major problems for them.

An large airliner uses the highest amount of thrust during these scenarios:

With a reduced engine rating:

Water landing: possible, but a worse choice than landing on land

The size of pontoons is larger than wheels. Therefore even if it is fully retractable, it would take up more room. Moreover, aircraft experiences a stronger deceleration when touching down on water body. Therefore the airframe would need to be reinforced.

The "ground-effect on water" idea is plausible though, as it solves all the above problems:

The atmosphere changes properties with altitude. This change in properties is called the lapse rate.

This change in engine performance with altitudes (confusingly) also called a lapse rate: 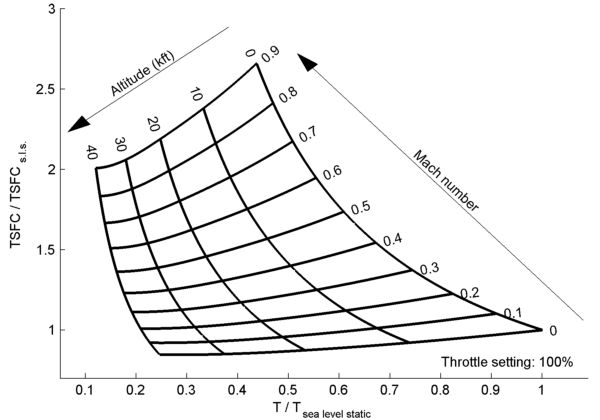 Because the relative engine performance changes with altitude, aircraft with different engine types must be designed to different specifications.

For aircraft with turbojets (no fan, only compressor), the design constraint is the engine thrust needed during take-off. A turbojet engine designed to be sufficient for the aircraft take-off has excess thrust available when flying at cruising altitude.

Almost all current airline aircraft now use high bypass ratio turbofan engines. Pilots very often use much more power from these engines than is strictly required for takeoff so they can clear the crowded and dangerous airspace around the airport.

So I suspect that using assisted take off system would not improve efficiency by very much.

However, you didn't ask whether the idea was better than the current system, you asked whether it was realistic.

This is an example of this technology in current use to aid cargo craft trying to take off from Antarctica. 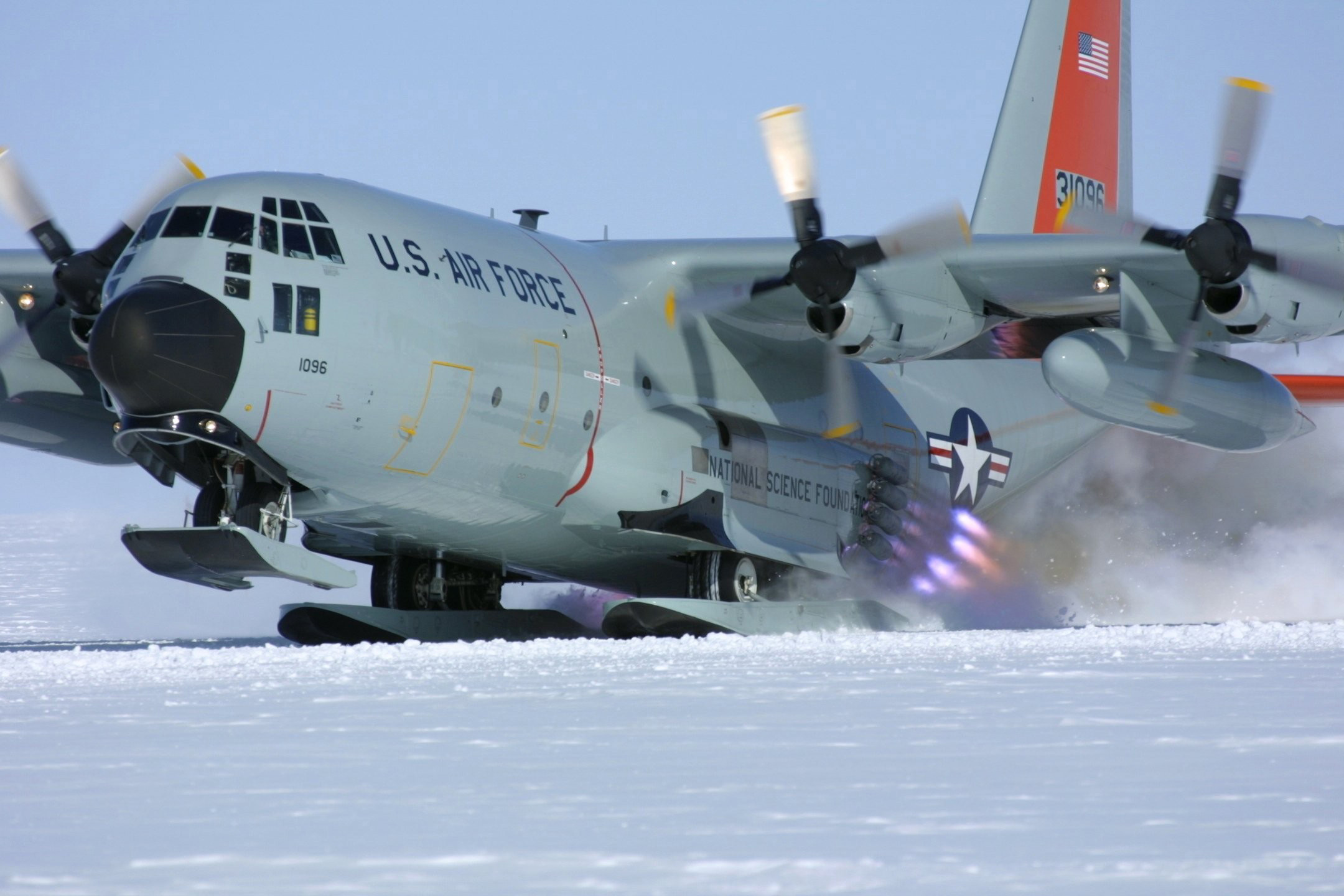 During WWII aircraft able to land at sea were used widely across the world by all of the belligerents. The ability to perform water landings was extremely useful for flying into and out of regions with few or no aircraft facilities. The aircraft just needed some fuel and an open stretch of water to be operational.

Yes, building and using an aircraft capable of water landing is realistic.

Yes, it was already used a great deal.

The system is probably not very practical for large airliners. However, in the interwar period large naval vessels desperately needed aircrafts for recon/fire control purposes. But helicopters were jet to be invented, and the decks were occupied by the great cannons.

So they used catapults to launch small floatplanes, which landed on water, and were recovered by cranes:

Many cruisers and battleships used this method, including legendary units like Yamato, Missouri or Bismarck.

But the savings manifested on the ship (more place for weapons) and not on the planes, whose performance was usually inferior to carrier and ground based aircraft.

In addition to what was said, water landing requires a large, accesible body of water. This limits your aircraft's use to such places (a bit), as having both normal landing gear, and a boat hull is somewhat complicated and prone to problems in an event of water landing (if the gear systems intersect water hull, you can get leaks due to stress/fractures).

Also, water landing requires facilities / additional craft for easy boarding on/off the aircraft, and especially in any emergencies, access to the aircraft is limited (so. i.e. engine fire cannot be tended to as fast if you stop at the middle of the lake, compared to the runway service firemen rolling next to you / right after, the moment you touch the ground)

Not the answer you're looking for? Browse other questions tagged reality-check modern-age transportation aircraft infrastructure or ask your own question.

48
What scientifically would make it possible that certain large bodies of water be impassable?
1
Low density air on a planet - effects on civilian and military aircraft (not spaceworthy)
18
How well would precision guided munitions work against early aircraft?
6
How would SSTO aircraft affect warfare?
6
Aircraft that can endure high winds and storms
15
Is it possible to detect or recognize mammals, fishes or any other sea creatures that swims in an ocean from a flying aircraft?
4
Is a species that uses males of related species plausible?
28
Why would a civilization that has invented teleportation use other means of transportation?