Killer seeds for the sake of early plant growth

This plant I am designing grows on earth, in locations where competition between plants is fierce, water is scarce and also nutrients in the soil are diluted. The dilution requires the plant roots to be developed at least in 1 cubic meter of ground to be able to sustain the plant life.

This plant has developed peculiar traits to succeed in this environments:

In order to secure that seeds are spread away from the mother plant and to provide a boost of nutrients to the growing plant, the fruit of this plant is highly sweet, attracting animals from miles around thanks to smell. Once eaten the fruit releases, together with the seed into the stomach of the animal, a poison which stops peristaltic movements and kill the animal in 2-3 days. The rotting corpse will grant the growing seed the nutrients needed to develop the roots until the cubic meter mentioned above.

Is this a realistic mechanism?

There is at least one plant in which the seeds and seed structures kill the animal which disperses them: Pisonia, aka birdcatcher trees.

These trees live on barrier islands with nitrogen poor sandy soil. Birds nest in them because birds like islands. The seeds are sticky and entangle chicks that run afoul of them. 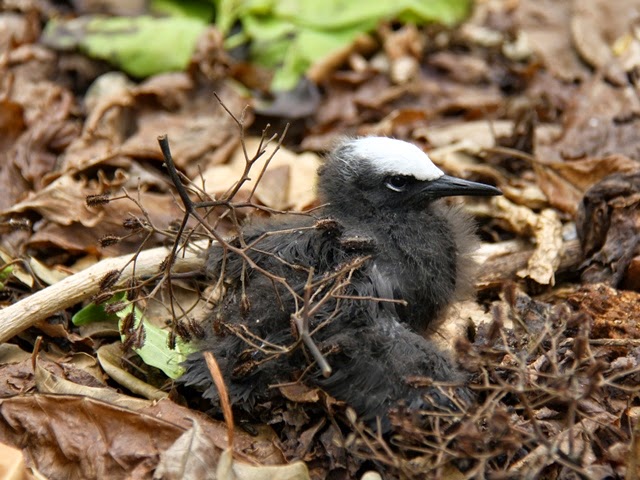 this image found at http://hdpphd.blogspot.com/2014/04/capricornia-cays-survey-holiday-3-heron.html

Bogged down with seeds the chicks hop around for a bit then die, their hopping doing some dispersal and the carcasses fertilizing the seed.

As regards the prospects of an animal eating a fruit which will kill them, that is trickier and something I have not heard of. But not impossible. There would be very strong evolutionary pressure to not eat that fruit!

Re the anticompetition chemicals that happens not infrequently. Black walnuts are the one that comes to mind. http://hort.uwex.edu/articles/black-walnut-toxicity/ The bigger the tree the more poisonous the soil, but I think that is because under the tree is where the most nuts fall.

I could imagine a seed with a mechanism like the pisonia: it sticks to an animal and then gradually poisons it with something like curare (a paralytic neurotoxin). That lets the animal get a little distance. The soil in the immediate area of the dead animal will be pretty rich in the short term and that might be enough to discourage other seeds while your plant gets established.

Not if the fruit kills the animal that is supposed to distribute the seeds. Otherwise, this is not unlike seeds that only germinate after passing through the digestive tract of an elephant, for example. It is the poop rather than the carcass of the animal that provides nutrients.

Perhaps to get around the animal evolving to not eat it you have the fruit be poisonous only some of the time. Perhaps 1/2 of the time it is reproducing it has lots of nice nutrients, but secretes laxatives after 2-3 days so the animal doesn't completely digest the seed. The other part of the time it kills the animal in 2-3 days and there is no way to tell the difference.

Not the answer you're looking for? Browse other questions tagged reality-check flora or ask your own question.

18
What is the limiting factor for a plant's growth?
17
How long would it take to terraform a lifeless but somewhat earthlike planet using bacteria, fungus, seeds and eggs?
14
Is there a limit for plant growth speed?
5
Rapid artificial weathering of basalt by domestic vegetation
6
Could Bamboos Evolve Into Trees In the Past?
8
Realism of this Respawning Creature
8
Question regarding plant based poison for a short story
1
What modifications are needed to have plants that can grow and survive in a world of sugar and sweetness?
5
Could my fungus exist naturally?