My Kepler Bb humanoids are externally gender neutral until they are 5 years old. So you can only tell if they are male or female before then via genetic testing or an abdominal scan like an ultrasound, X ray, or CT.

Now here is my idea as to how males and females develop in childhood:

At birth there is only a tiny nub. Females have this too so this isn't a sign. The testes haven't descended from the abdomen at this point. There is no need to since sperm production doesn't start until the male is around 15 years old. Because the nub is so tiny, there isn't the characteristic spray of urine. It just flows out like it does in females. At 5 years old a special hormone is secreted. It is the childhood version of testosterone. This triggers the nub and the urethra within it to grow longer but not wider(at least not wider than it would normally grow at this age). It also triggers the testes to descend and the skin in the groin to form a pouch. Once all that is done, childhood testosterone production plummets down close to 0. When adolescence nears, childhood testosterone production completely stops and then in adolescence, adult testosterone is produced and this triggers sperm production and erections and makes it easier to build muscle.

This production of special childhood versions of sex hormones that only triggers external genitalia formation, I think is the most plausible way for the child to go from externally gender neutral from conception to definitive male or female at 5 years.

But is this plausible having 2 different versions of the sex hormones, one that triggers external genitalia formation(childhood sex hormones) and one that leads to sexual maturity and is produced until death(adult sex hormones)?

You do not need a special hormone, or to turn it on or off. Use testosterone and have it be a matter of degree. Have there be little or none, then an intermediate amount to trigger the changes you want, and then at puberty a lot.

You do not have to invent anything because that is how testosterone works for humans. The amount present will drive the development of the external genitalia farther towards the male end of the spectrum. The default path for genital development is to the female. Genetic males who do not produce hormones Swyer's syndrome or are mutants with nonfunctioning androgen receptor are phenotypically female. 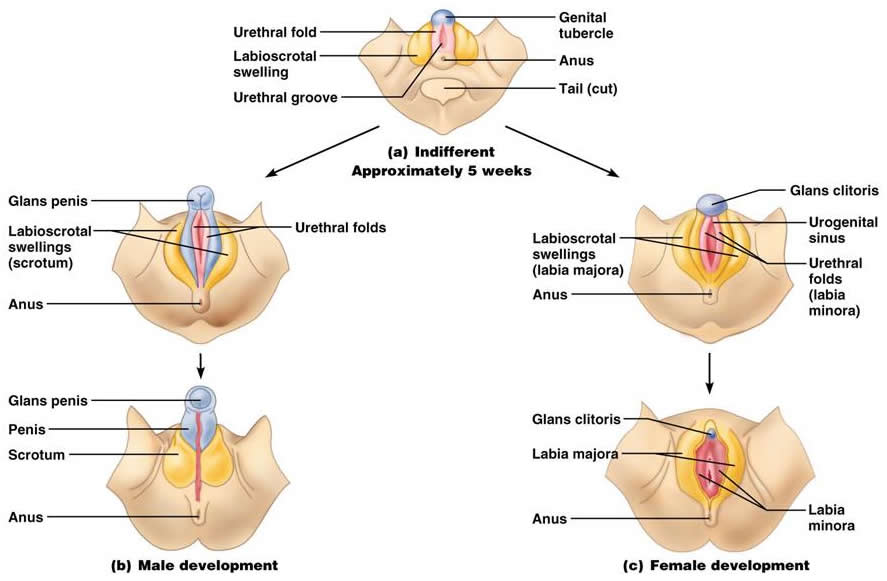 Yes, it is plausible.

Because the hormone affecting male is different with female, you can make a same gland that produces different hormone for male and female.

There is a sexual gland that is different (genetically, not necessarily observable different) for male and female, that secretes the childhood testosterone and estrogen-progesterone at 5 years old.

For reference, thymus gland. It becomes smaller as we approach puberty, so there is indeed a mechanism to remove the production of childhood hormones. However, you must remember to assign the gland which will produce the adult hormones. It could be the testicles for male and ovarium for female, or whatever!

Not the answer you're looking for? Browse other questions tagged creature-design anatomy humanoid or ask your own question.