How fast can dungeons be covered and how low can they sink?

My plot is to have temples,castles and cities built on top of the remains of previous structures repeatedly to create a multi-level underground dungeon. My goal is to figure out how many levels this dungeon can have as it ages, and what its height relative to the land around it will be.

https://en.wikipedia.org/wiki/Subsidence of buildings seems to be a common enough thing. In addition, it seems like the ground underneath structures is depressed in comparison to the level of the surrounding land. At the same time, layers of dust and dirt are continually laid down, and life builds on top of it all. This seems to be called Silting, and it is the process that lays down strata.

For example, how long would it take before a city with a 25 square km area, a max height of 65m, and an overall weight of 2 million tonnes, located in a subtropical dry forest, was covered in 1 m of earth

When it comes to formation of soil, the equation is pretty daunting. About 1 cm for every 200 years in a tropical environment.

Given that you want to cover 65 meter buildings with soil at a height of 1 meter, the amount of time would be the number of centimeters times 200 years.

That's a lot of time.

As to Subsidence, that's going to depend greatly on the ground you build it on, and quite honestly, no one is going to want to build atop a region that unstable. I live in a place where this can happen. Believe me when I say that no one is looking to build on top of the sunken building, because they know it's unstable. It's often a result of limestone, karst topography and a shifting water table.

Yes, buildings can unevenly sink sometimes as much as 1 meter a year, but generally they reach a tipping point, where they either stabilize or--half the house falls into the newly formed sink hole. Generally they do not uniformly "sink." That seems to be what you are picturing but it rarely happens this way, and would be strange indeed. There are measurements of places where they have said like "sinking at 2 feet a a year" or something, but you have to realize that is the AVERAGE. There are always places where it's more or less, and it's hell on a building when the left side is 1 foot higher than a the right.

I cannot give you an equation for this one because rates of subsidence vary widely, from place to place and soil condition to soil condition.

If the buildings are in use, folks may clear things away, or strengthen foundations.

It's a better idea to have a sudden disaster hide buildings under rubble that was then used as a foundation. Or-- your city dwellers can deliberately build at a higher grade for plumbing like Seattle! Check out their underground buildings!

If a ruler or society decides that they want to rebuild at a certain level, they can preserve the lower levels, sometimes because the original owners complain, sometimes because they want room for sewers, do not underestimate the power of public works systems.Some can just be closed off when building another section and forgotten--there are abandoned subway platforms like this.

The issue with natural covering up of dungeons rather than conscious building is that in-fill is more likely to happen. It's not...like a lot of fun for people to dig out an old city, but it is fun for them to explore it. The only way that can happen is if people actually build over it.

@AlexP has got it right. Cities rise. From The Atlantic

By 1580, when Montaigne visited Rome, the classical city was all but invisible. He observed that when modern Romans dug into the ground, they frequently struck the capitals of tall columns still standing far below. "They do not seek any other foundations for their houses than old ruined buildings or vaults, such as are seen at the bottom of all the cellars."

Here is King Nebuchadnezzar explaining in a dedication plaque why he built the "new" Ishtar Gate.
From ancientorigins.net

I, Nebuchadnezzar, King of Babylon, the faithful prince appointed by the will of Marduk, the highest of princely princes, beloved of Nabu, of prudent counsel, who has learned to embrace wisdom, who fathomed their divine being and reveres their majesty, the untiring governor, who always takes to heart the care of the cult of Esagila and Ezida and is constantly concerned with the well-being of Babylon and Borsippa, the wise, the humble, the caretaker of Esagila and Ezida, the firstborn son of Nabopolassar, the King of Babylon. Both gate entrances of Imgur-Ellil and Nemetti-Ellil following the filling of the street from Babylon had become increasingly lower. Therefore, I pulled down these gates and laid their foundations at the water table with asphalt and bricks and had them made of bricks with blue stone on which wonderful bulls and dragons were depicted.

This was around 600 BC. Babylon had already been a city long enough for the city to rise to the point that the existing gate had a low clearance of about 8 feet. I read that the rebuild raised the ground level of the area 60 feet.

Here is an Egyptian obelisk which was brought to Constantinople in 400 AD. This is a place where people were probably not just piling stuff on top of stuff willynilly and you can still see that the base of the obelisk is at least 4 meters below where the tourists are standing. I found this image at speacock.net 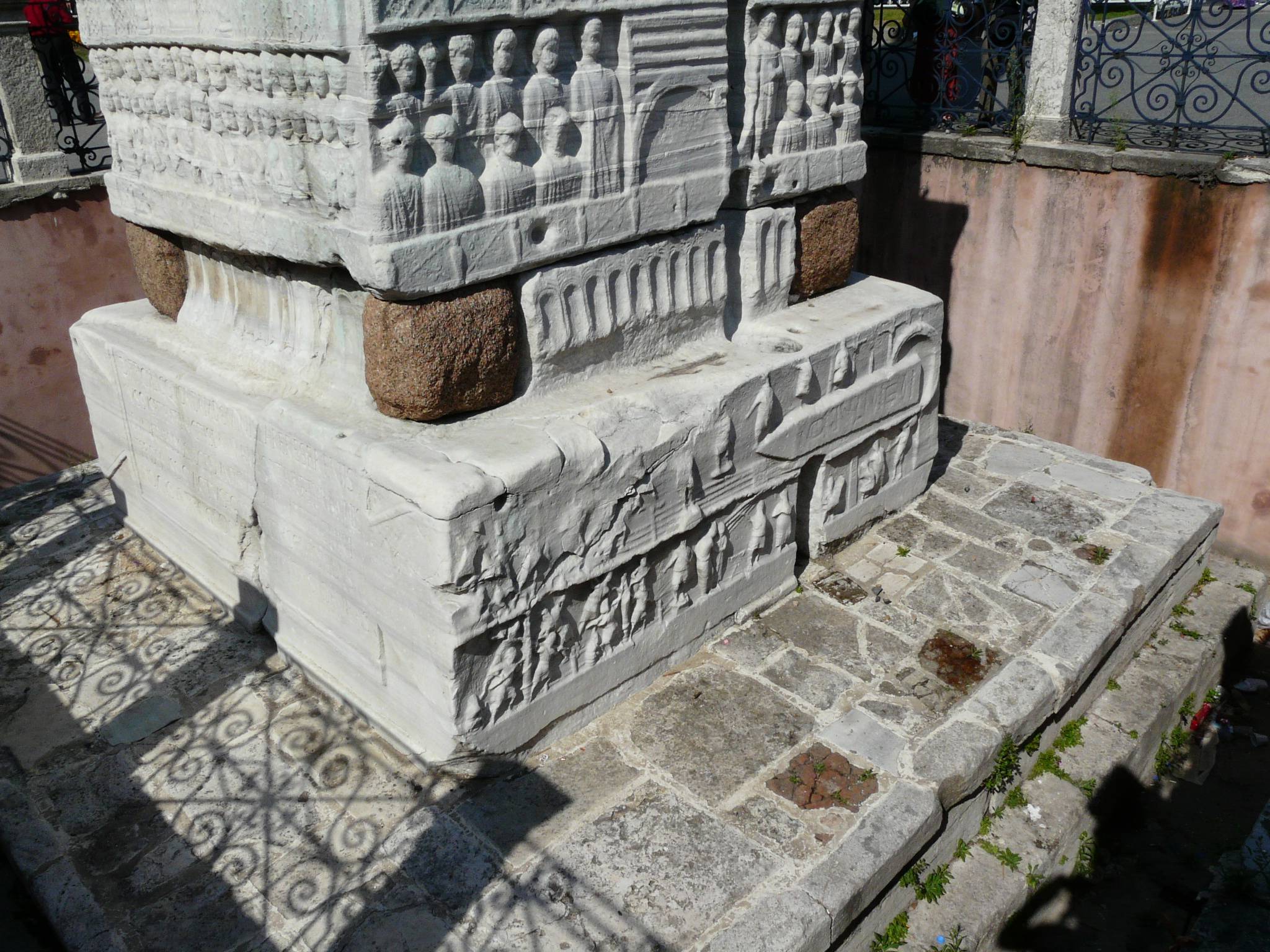 So: have your dungeon be the lowest levels. Maybe built by prehuman civilizations! Stuff was built on top again and again but the original strange temples are still down there. Waiting....

This thought - the new upon the old upon the older - leads me to post some text from the beginning of The Rats in the Walls by H.P.Lovecraft.

Exham Priory had remained untenanted, though later allotted to the estates of the Norrys family and much studied because of its peculiarly composite architecture; an architecture involving Gothic towers resting on a Saxon or Romanesque substructure, whose foundation in turn was of a still earlier order or blend of orders—Roman, and even Druidic or native Cymric, if legends speak truly. This foundation was a very singular thing, being merged on one side with the solid limestone of the precipice from whose brink the priory overlooked a desolate valley three miles west of the village of Anchester. Architects and antiquarians loved to examine this strange relic of forgotten centuries, but the country folk hated it. They had hated it hundreds of years before, when my ancestors lived there, and they hated it now, with the moss and mould of abandonment on it.

Do note that the city you mention in your question, 25m2 is a very big city. Smaller will probably go easier.

Up and down, Unless you are building things in a bog, where structures sink until they rest on (probably) a sand deposit, cities do build up. With continual habitation my memory tells me it is about 1cm per 100 years. But I can't find a source for that. Alas.

Up and hurry, But we can make it pile up faster: burn it down, let nature take over for a few (50) years, and resettle. That way you could build up faster. If you have hills people tend to use the caves as well, so you gain even more layers.

For a very famous example you can use Troy:

While this picture does not show the size of the layers, is does show the ages it was created. Just remember, it took about 2500 years to build it. An other thing to remember is that things do break down, so having whole passages that stay intact is unlikely. Google Image Search.

Down and Dig If layers is all you care about, then at the same time dig deeper. Like these guys in Cappadocia, central Turkey, who dug out a huge area for refuge. See also Derinkuyu. I think I have found a new holiday destination I want to visit. 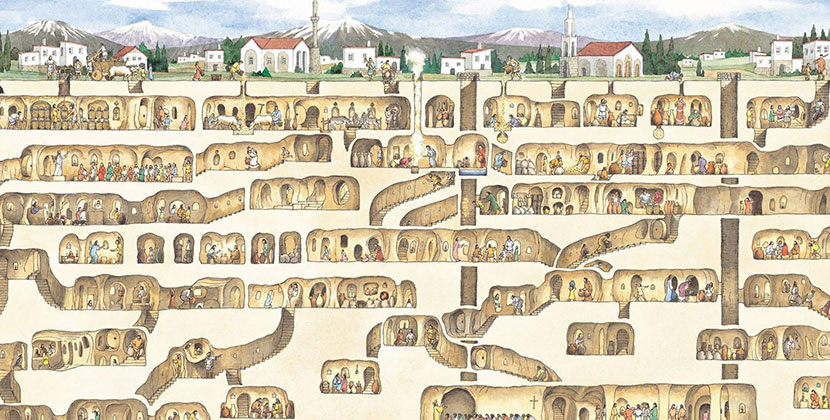 As other answers noted, the soil and dirty pile up very slowly. But it could be changed with a bit of fantasy:

But almost all of those things will be irrelevant if you need dungeons free for walking (or exploring, fighting etc).

In the past, cities often burned down. The rubble was compacted and new buildings were built on top. In many European cities, you can see that churches and cathedrals are at a lower level than the surrounding buildings. And also see tells

Not the answer you're looking for? Browse other questions tagged physics hard-science geology archaeology dungeons .

25
Ferrying an island with mortals on top. Is it possible without killing them?
12
How do lever controlled mechanic structures in dungeons work and how feasible they are?
8
Rock formations & islands on a moon with megamareal tides
6
How could a magical enchantment minimize the effect a super dense and super heavy object would have on a floor beneath it?
2
How small and fast can a bullet go in atmosphere?
21
How dense can a human get until they "sink" through the ground?
25
Why don't adventurers (and monsters) suffocate in lower levels of dungeons?
4
How fast and how would fjords erode?
4
How best could our society explore dungeons?