I love spider tanks, ever since I watched that episode of Ghost in the Shell: Stand Alone Complex, with an experimental spider tank going rogue.

Most of them consist of three main parts:

Regardless of type, all spider tanks possess 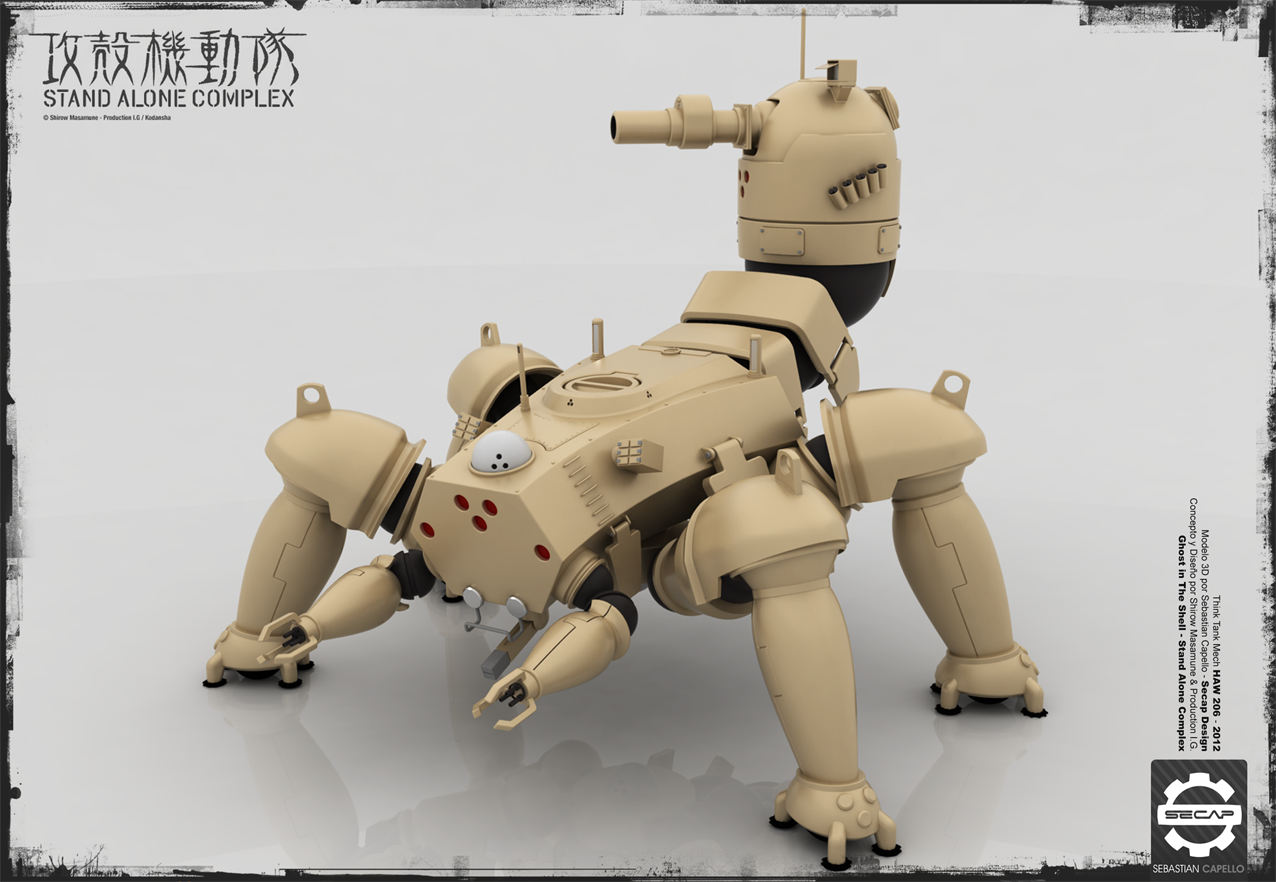 A military spider tank from Ghost in the Shell: Stand Alone Complex (video link in the picture :)

Their armor and weapons are mostly dependent on their size. Larger ones usually have a "stinger railgun", that can be moved around with a high degree of freedom, enabled by the same types of artificial muscle.

Even the heaviest ones are relatively light-weight (because they're mainly built out of carbon allotropes), as all spider tanks are capable of jumping up to 15 meters high, via their powerful legs.

Now, I wonder, whether these tanks have some sort of a "fatal flaw", that I overlooked (we're talking about modern day and near future settings, the 40k one was just there for the lulz)?

When we talk about reliability, there is a motto:

What is not there cannot get broken

Legs and joint are the key weak point in your concept design, expecially if you want to move around some tons of body and even jump. You are now multiplying this weak point by 6, which gives both an easy target to any enemy wanting to take the tank down and a nightmare to reliability engineers trying to make the thing operate as intended. Sure you can reinforce the hull to withstand anti tank shells, but doing the same on joints which are supposed to move around is another story.

Their legs are vulnerable - they have a large surface area to volume, which means that they won't be able to be heavily armored, as any added mass on the legs would greatly restrict mobility (moving legs -> moving tank, adding weight -> slower legs -> slower robot) - very similar to how cars try to minimize their unsprung wheel weight as much as possible in order to remain fast & efficient. Furthermore they have many exposed joints which are vulnerable to getting gunk / sludge / stuff stuck in them, which would make them unable to move

Speaking of efficiency, jumping is not an efficient maneuver - while I won't doubt your 15m jumping ability, as you can hand-wave an energy source, you will also need to hand-wave it as to why it won't make sense to use that energy source in a more efficient method (i.e. traditional tank, flying robot, whatever)

You mentioned wheels on the legs - All of the above still applies, you need to not only make it possible, but make it somehow better than the alternative (normal wheeled vehicle, or even compared to a tread-drive tank). Strong, light-weight armor? Why not put a plate 2x as thick on a regular tank for more protection?

That said, there is one distinct advantage that the legs give your tanks - that is they can step over large obstacles or cross very difficult terrain. You may want to reference the AT-ATs from star wars and see how their legged tanks could adapt to various terrains.

Not the answer you're looking for? Browse other questions tagged science-based internal-consistency warfare science-fiction .

10
Ancient tanks of war
16
Is a four armed arboreal reptile as described viable?
40
Zero Emission Tanks
13
Orbital Drop Pods: Useful?
50
Advantages of "Spider Mechs" over Tanks?
5
Lifting a spider mech
4
Humanity is an FTL capable empire with great technological capabilities, what will our fighting machine or machines be like?
38
What kind of war would lead to Ultra-Heavy tanks being useful?