What design for a Martian space colony would be the most realistic and efficient at the same time? [closed]

Using cutting-edge, but also modern day technology. Where on Mars would the inhabitants live in? In what type of housing would the inhabitants live in? What commercial aspects would exist, and how? Maximize the accessibility of the luxuries found on Earth, and explain how that would work. And finally, anything else not mentioned that might be required in a Martian colony.

A complete modern day Mars colony isn't really viable economically anyway. At best we get some domed structures (for research).

However, I could write what likely would and wouldn't work. If our main constraints are time and modern day technology you can kiss terraforming goodbye. At best you can try and create a breathable atmosphere. But it's not gonna be pleasant. Mars is cold, it's further from the Sun. You could try to artificially create an atmosphere, something barely breathable to humans but cold.

Now this would still take tremendous time. At the same time you could try and create flora around the equator. Primitive genetically engineered tundra flora. Regardless your people aren't gonna build a range on the surface.

A cold atmosphere won't support liquid water at the surface. The surface will largely remain cold and dry. You people will need to remain in their domed cities. Modern technology here will be the limiting factor of size. In theory you could dome entire canyons, craters and calderas. But I don't think modern day materials are quite there yet. But if you stretch modern day a bit we probably can get there. Carbon nanotubes are amazing after all. Now you probably want to paint any non-transparent surface probably with some super black paint, something like Vantablack. 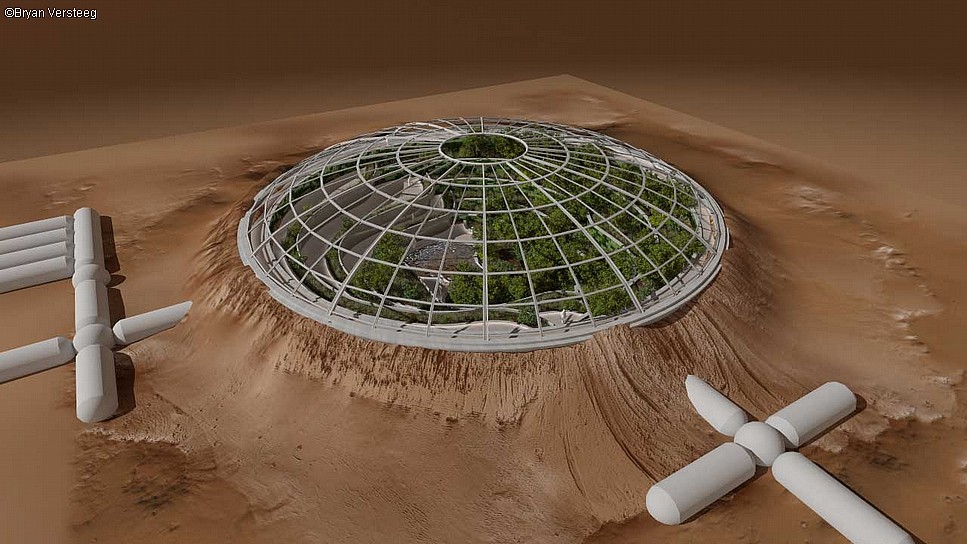 So less white, more black. This will trap the little heat you'll get. Another heater we might be able to pull off with modern technology will be solar mirrors. Now I don't think we could get them economically but we could technically get them. The idea here is we launch several enormous reflective panels in space. Likely a frame holding hundreds if not thousands of them at the same time. These then reflect sunlight back to Mars, giving us a little extra heat.

But why even go there? What could Mars offer us? Remarkably little honestly. Low gravity manufacturing, research and medical care. Medical care? Yes medical care, though zero-G might be even better. But Mars' lower gravity would help for anything that deals with muscle strain. Reduce bedsores too, less pressure on the body.

As for manufacturing, it would allow for some interesting new materials. But they need to be really special to offset transportation cost. Same reason mining will not be economical. Getting the ore from Mars to Earth will offset any profit.

Research would be interesting, not sure how much new things it will allow us to do. But you do get a new set of variables to work with. And unlike zero-G you get actual gravity.

Not the answer you're looking for? Browse other questions tagged space-colonization modern-age mars or ask your own question.

11
Design me a Mars drone
21
How would earth goverments respond to killing of most of a colony to keep the rest alive long enough for rescue
5
Why and how would a caste system on a space station/colony develop?
17
What weapons would likely be used in a Martian war?
3
What is the minimum industrial infrastructure required to colonize Mars?
0
Can humanity survive on red planet
4
Self-sustaining Mars colonization