Hallway cannon, the last way out

I'm working on a comedic horror about an overzealous doomsday prepper. One idea I was playing with was an escape route, should it be needed...

The story centers around a hermit who's been preparing his defenses in the Tennessee hills for years. He's perhaps a little mad, but he's obsessed and he's a barely competent engineer. When his wildest dreams are realized in the form of the zombie apocalypse, he finally starts to​ pack homemade gunpowder into his most ridiculous invention. The hallway cannon.

Here's the question. How much black powder would he need to reliably clear a 3x6x25 foot hallway with at least a dozen zombies in it?

Keep in mind I'm hoping for completely clear. Literally shooting zombies out of a cannon, while leaving a passable hallway.

The hallway is obviously reinforced as needed, with smooth, albeit rectangular, steel plate walls. Assume a fairly good home mix of powder. Small grain, but mixed from garden supply sulfur, urine rendered saltpeter, and barrel cooked charcoal. Not perfect powder, but as good as it gets for home-brew.

Our hermit hero will be jumping down into the hall through a smallish breech also covered by reinforced steel plate, assume that this is the only significant hole in the hallway.

The big problem he faces is not how much gunpowder he needs, but that the "cannon" will be ripped to pieces and the "barrel" will probably cave in after he fires the shot.

Compounding this problem is the fact that he is not firing a projectile out of the "barrel" but something that allows the combustion gasses to pass around it. Unlike a projectile that acts as a near perfect seal and trapping the gasses — the only exception being the rifling that allows some gasses to pass around it — the zombies take up no more than 50% of the cross section of the corridor. This means he needs a much bigger charge to eject the "projectile(s)".

The Tsar Cannon gives an idea how thick the walls of the barrel needs to be in order to stand up to the pressure. 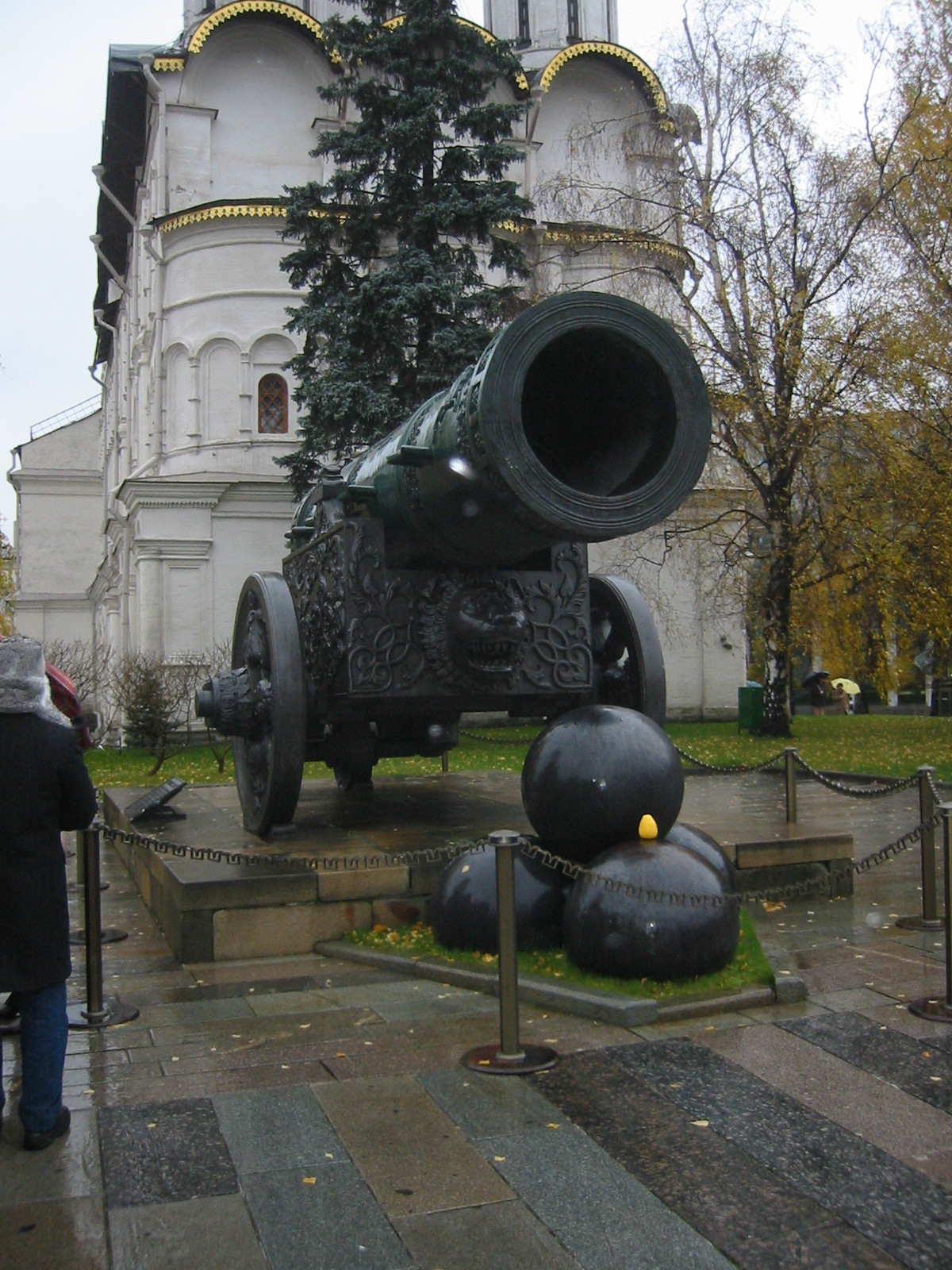 Unless he reinforces the "barrel", the rock will most likely probably crack and collapse, trapping him in his hidey-place forever.

But things are not all doom and gloom... there are some upsides.

There are ways he can make this work.

When it then comes down to how much gunpowder he needs... well: this is anyone's guess, because the sum of human experience when it comes to black-powder powered 60-inch zombie cannons is — understandably — quite limited.

I would suggest that you hand-wave it by saying he made a couple of experiments.

One was laughably under-powered... not enough to make his chicken carcass-filled mannequins do anything other than fall over each other in a grotesque parody of Barbie dolls copulating.

The second attempt was a wee bit overpowered and unfortunately left him with a collapsed cave and some very angry visits from the local authorities after the shock-wave cracked windows, triggered burglar alarms, and scared Mr. Swanson's cows into stampeding through the nearby town... plus it left a huge swath of land down the mountain to stink of rotting chicken for a week before the scavengers had eaten all the chunks. This also gave him the idea to make it a sequential charge instead of one Big Bada-Boom

The last experiment however seemed to be quite all right, and it also gave him the idea to use shock-absorbers to help improve the survivability of the "barrel".

You asked for science. Well here it is: postulate that he experimented — i.e. used a comedic version of the scientific method — and then "eventually, he got it right".

...or he could just use a rocket engine

An alternate solution would be for your hero to not use a cannon but a rocket engine. A solid fuel rocket booster built into the deep end of the tunnel would provide a spectacular effect. The tunnel will not only be "blown" clear but also absolutely sterilized. Also solid rocket fuel is (usually) a lot safer than black powder. Your hero can even use black powder as rocket fuel. Black powder was actually used in rockets before it was used in guns.

There are a couple of problems with this. The main difficulty would be in obtaining the solid rocket fuel. And also that the tunnel will be glowing hot and probably dripping with molten rock and/or rocket fuel residue.... and also be filled with smoke from the still smoldering rocket engine.

Once you have fixed the hallway as a barrel (not a small feat, more so if you are a barely competent engineer, see @MichaelK answer for how). We don't need cannon speed, just enough to clear the Zombies. There are multiple options:

Now back to your question:

Here's the question. How much black powder would he need to reliably clear a 3x6x25 foot hallway with at least a dozen zombies in it?

He doesn't need much gunpowder, because Earth's gravity pull can give a big hand. Slant the hallway slightly. The black powder charge only needs to make the ball start rolling, the rest of the job is gravity's doing.

You can still have the comic puff of smoke and fireballs coming out the other end of the "barrel" just fine, together with the pieces of zombie that were pushed out.

For a more pushing / less crushing solution, put the "ball" on rails and make it slide instead of roll.

If you want to go for laughs, ditch the black powder and use a giant spring behind the back wall.

Or, make it an air cannon. All he needs is to drill out a tall and wide vertical shaft with a very heavily weighted plunger with an air tight seal.

If he's smart enough to place himself downhill of a large water source, he can turn the hall into a water sluice. This would have the benefit of being self cleaning.

There may be too many Saturday morning cartoons in my early years.

In a Cannon, you lose energy by gasses passing around the shot before it leaves the barrel. Shotguns deal with this by using Wadding, or a plastic plug to push the shot along without losing the gasses.

So Crazy Prepper uses this concept. Make the Powder charge sit in the breech behind a wall that is lined with the appropriate wadding material. The powder would probably be best put in a container at roughly the center of the wadding, wall.

For best effect, the "Barrel" of the hallway cannon should be circular. That way if the pressure is uneven, the wall doesn't get lodged in the "barrel"

He could even make a very thick bit of lightweight wadding to help with that. In a shotgun, the wadding carrier is usually thick enough to keep it from turning in the barrel.

Come to think of it, he might just use a thick, semi-Rigid plug of wadding material, chosing to think of the ZOmbies as the "shot"

Edit (for a silly Idea I just had) Use a thick enough chunk of wadding to keep it from rotating and getting stuck in the "Barrel". To the front of the wadding plug, with 3 foot standoffs, mount a series of blades arranged like you would see on an industrial french fry cutter. Better than spikes, even. turn your Z's into more manageable cubes as the projectile slams down the "Barrel" This takes care of the crawlers as well. Just make sure the grid patterns squares are smaller that a normal human head.

If you remove your requirement that the zombies have to be "removed" just by the force of the explosion, then nature can provide you an even easier method: Provided that you have a bassin of water close by, which bottom is located higher than the exit of the hallway (which, itself, should be tilted downwards), then you can have a connection between the bottom of your bassin and the hallway itself.

Zombies in the hallway? Open up the valves, and let the water do the rest. Depending on the flow rate and the pressure the zombies don't even feel the water, the shock wave of the wave itself is enough to create a zombie smoothie.

In addition, the protagonist of the story could set the bassin up such that he can refill it within a convenient time period due to additional valves and a high water input, such that recharging is simply a matter of time for him.

Furthermore, he has no problem with cleaning up afterwards, the water does the job for him...

I think you're looking at the problem wrong. We don't want a monstrosity like MichaelK posted. That's heavier than he's going to be able to handle and requires some decent metallurgy to keep from bursting it. Not to mention what the pressure will do to the hallway unless it is also exceedingly strong.

Instead, on the end of the hallway I will place a bunch of much smaller cannons--say 16 or even 25 (assuming it's square. Adjust the numbers if it's not.) Build the array of cannons, then cast them in concrete so the muzzles are flush and the back ends stick out just enough for a fuse.

To fire them you use a fast burning fuse but in a daisy chain configuration so there's a fraction of a second between shots. Each cannon is loaded with a bunch of projectiles, not solid shot.

Since the guns actually fire only one at a time the overpressure in the hallway will be much lower. They will be close enough together that nobody in the hall has a chance to react, though.

To actually clear the hallway of the bodies comes down to how much you throw at them. Ignore the effects of the propellant, it will not have a meaningful effect and if it did you would be back to major overpressure problems. Figure how much hits the zombies and how fast it is going--how much momentum does it impart? Add guns until you have enough sweeping.

You'll probably want some extra cannons near the floor to help sweep it out.

Not the answer you're looking for? Browse other questions tagged science-based weapons post-apocalypse zombies or ask your own question.

19
What would be a realistic, competent response from the rest of the world if Britain were wiped out by a zombie virus?
27
Can you buy your way out of the Apocalypse?
1
How long would current weapons last?
6
Quick question: The feasability of this plasma cannon
37
How long could a late WW2-era battleship last under sustained ship of the line cannon fire?
21
What would allow gasoline to last for years?