Wings made of force fields? [closed]

I am trying to work out a system of "energy wings" for large sea-landing spacecraft in the vein of Space Battleship Yamato. 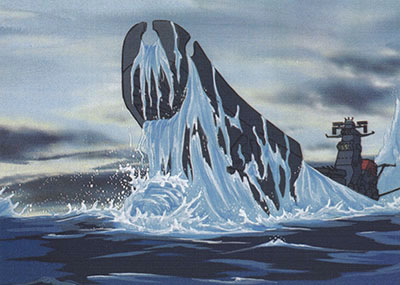 The "wings" would materialize only during sea landing and sea launch, creating a Wing-in-Ground Effect that lifts the ship above the water. They don't allow for atmospheric maneuvers (although they probably work as stabilizers), they are just for the transition in and out of the water. Landing is mostly a matter of airbreaking and then gliding into the sea on the wings. Once in the water the ships are essentially boats. For launch I like Trish's answer about creating rocket fuel from water.

For the moment I am suspending my disbelief that the ship has too many types of maneuvering engines (FTL, rocket, thrusters, jets, propellers…?), and focusing on just the wings and how they are "materialized". Are they fin-shaped forcefields created by rows of some kind of perpendicular energy projection? Or maybe another shape entirely, like something dynamic and undulating? Maybe they are not energy at all but something more mundane like laminar airflow or physical blades that retract into the ship, each shaped like a long thin wing?

As a bonus, could they serve double duty, possibly taking the place of thrusters in space and propellers in water?

Lastly, could energy wings scale down to smaller Ground Effect Vehicles that would need to maintain the wings for hours, or do I need enormous electric engines to generate them? One of my concerns is that I am casually creating a technology (solid force fields) that would essentially make all other technologies obsolete (why have walls if you can project forcefields anywhere?), so my goal is to find the simplest or least handwavium solution. If the wings can only be sustained for a short time because of energy requirements for example, that might rule out smaller vehicles.

The question is not about hard energy shields, and none of the answers in this question appear to apply. Reasons include it needs to function in an atmosphere not a vacuum, and the wing shape is fundamentally different from a shield "bubble" that encloses the ship to protect from projectiles.

One solution would be to propose a technology that can physically deform the body of the ship in set ways in order to change it's shape. Something like the idea of Smart Matter(TM) in Mike Shepherd's Kris Longknife novels.

Of all the solutions, I think this one would work the best for you, because you could simply draw off the armor cladding of the hull and use that to spin short, physical wings and then draw them back in again. Also, having a system allows the ship to also reconfigure itself for atmospheric flight quite easily too.

You could propose different systems for making it work, including force-fields that heat and then deform the ship's physical matter, or self-organising semi-organic matter (it grows changes like cells in the human body) or even having some skin system over physical actuators that move segments of the ship's interior around.

Not the answer you're looking for? Browse other questions tagged spaceships flight aircraft or ask your own question.

76
How can I move a planet?
41
Hard Sci-fi energy shields
3
Landing a spaceship

20
Simple non destructive spaceship liftoff engine
2
Would an aircraft that uses assisted takeoff and water landing be realistic?
3
Would an avian-style jetpack be advantageous?
8
Boats from space in planetary invasion
7
Small-scale aviation without fossil fuels
7
Would a portal to space enable propulsionless orbital launch
4
How would a fixed altitude magical Airship be propelled?
8
Wings for orbital transfer bioships? - The ascent
10
Could a combination of cheap energy and powerful thrusters turn good aerodynamic design into something that isn't always worth the cost?