We all know that equation for surface gravity is

where $\rho$ is mean density of a planet.

So what's the smallest radius, or highest density we can reasonably find in space to give us Earth-like gravity? By reasonable, I mean that it does not have to be common or even normal. I mean that:

Sadly, Earth seems to be the densest body in the solar system, on the "above 400km" table here, and I don't know how could we get any denser.

Note: I'm avare of other questions about small planets but here I don't care for life, tectonics, civilizations etc. I want baseline, canonical answer about smallest size for given gravity.

The densest reasonable material for a planet is iron

The wikipedia page for the abundance of chemical elements breaks it down a dozen different ways, but any way you split it, by far the most common dense material is iron. In the solar system, Fe-56 is estimated to be the sixth most common nuclide by mass fraction, after H-1, He-4, O-16, C-12, and Ne-20. It occupies the same position in estimates of the Milky Way galaxy.

Any answer that suggests a different material to form a planet out of, must give a reasonable explanation for why that other material won't be mixed with iron, which is at least two orders of magnitude more common than anything denser than it.

You can check out relative abundances here and densities here. The only thing close is Nickel which is also a constituent in the Earth's core. Lead is five orders of magnitude less abundant than Iron; Osmium, Iridium, and Platinum are closer to six.

Earth's core is mostly an iron-nickel alloy that has a density in the 10000-13000 kg/m$^3$ range. However, the planet's density is lower, because of the lower density mantle, composed of periodite and olvine and other lower density rocks. The easiest way to make an all-iron planet is to remove the mantle.

How do we remove the mantle? I would suggest one of two ways: a massive collision or formation close to a variable star. Both of these are theories about the formation of Mercury.

The massive collision would be somewhat like the impact that formed the moon. In that collision, much mantle material was blasted off to make the moon. We would need to adjust the collision to blow of all the mantle materials, to leave just an iron core to coalesce. A similar explanation has been proposed for Mercury, which actually has a higher iron content than Earth. However, being less massive, it is not as compressed and therefore less dense.

The other theory for Mercury's formation is that Mercury formed before the proto-sun had fully contracted. The temperatures at Mercury reached 2500K or even 10000K and turned much of the planet into vaporized the rock. The lightest 'rock vapor' was then carried away by the solar wind. A variable star could have, early in its life, pulse melted and then stripped lighter materials from a planet. If the star cooled later in its life, or became less variable, the planet could have solidified into an iron mass.

How big is a 1g Iron planet?

Earth's core density is listed above, and Iron at standard temps and pressure has a density 7870 kg/m$^3$. I'm not exactly sure the density gradient through the mantle, but my estimate is an overall density of about 9500 kg/m$^3$ for a planet with the same composition as Earth's core.

Pulsar planets are made from only the heavy elements.

The planets are believed to be the result of a second round of planetary system formation as a result of two white dwarfs merging with each other into a pulsar and a resulting disk of material in orbit around the star.

This may prove that pulsar planets are common around neutron stars. The debris disk is likely to be composed of mainly heavier metals.

Now disrupting white dwarfs will cause the spilled material to expand back into normal matter, but will it be mostly iron or what? More generally, a debris cloud made of those elements which did not blow away will be enriched in “heavy metals” so consider osmium, lead, platinum, etc.

An object made from this mix would be expected based on what we know, not taken as artificial. To be more surprising, but still presumed natural with better formation models needed, would be that this heavy metal disk was sorted by weight so that planets formed with different fractions, including one that’s made almost completely out of the heaviest elements.

Maybe the magnetic fields of the pulsar causes separation by element, so you get one planet made of iron, one of lead, two※ made from the platnum group elements, etc. All the “like” (weight and magnetic moment) material in the cloud is herded into separate bunches in a cosmic scale mass spectrometer, and each bunch ends of forming a planet.

Mołot calculates that the osmium world would be 1553 km, and lead 3094 km, to match Earth’s surface gravity.

So, it's pretty exotic to have a pure osmium planet, which is why other answers have avoided it. But exotic happens in the universe.

Under normal pressure, Osmium is 22.5g/cm3, whereas the earth itself averages 5.51g/cm3.

At surface pressure, WolframAlpha suggests a radius of 1,560km

But the vast majority of earth is not under normal pressure. Real proper bods have looked at the compressibility of Osmium (it's not very compressible!) and they produced this diagram 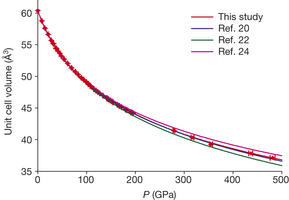 Google tells us that the pressure at the centre of the earth is about 360GPa, so we can read off the volume from the graph at around 40 angstroms^3 vs. 60 at normal pressures, which gives us 2/3 the volume: 33.75g/cm3.

So again our friendly calculator gives us a minimum radius 1,040km.

So now imagine that a chip of neutronium has split off a neutron star and (impossibly) remains stable. It wouldn't be comfortable (we would rapidly die) for us to walk on, but...

Neutronium has a density of about 4.0×10^14g/cm3, so it's wildly more dense than Osmium, and you would get a sphere of pure neutronium with a radius of about 8 hundredths of a micrometer.

So, as long as your planet has a neutronium core, you should be able to have a planet of any radius (bigger than micrometer) you choose, just by wrapping the core in a shield something to stabilise the neutronium. 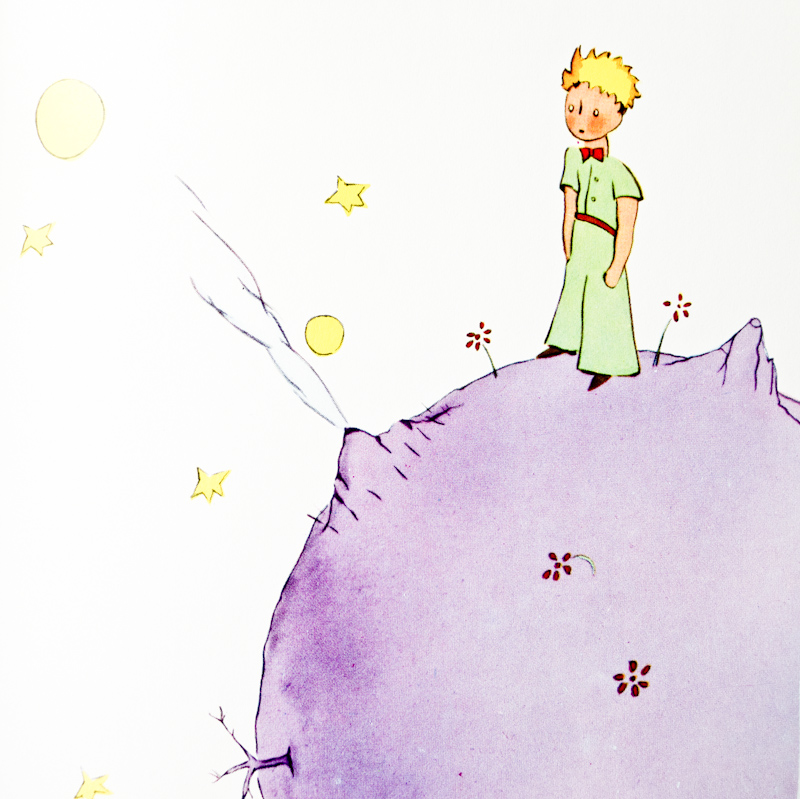 Huge Kudos to Dietrich-Epp for noticing my terrible maths

So I approached this in a more experimental way than theory and plotted the density from a list of the planets we know of and searching for the densest one (that isn't a gas giant).

Not very far off the radius of earth ($6371km$), but cited as the densest known rocky planet - perhaps this will at least give some guide-lines for what is seen.

Reasonable as in unusual but not breaking any laws of physics?

Without anything really exotic

About the size of the earths moon.

If we had a body with a core containing a really quite remarkable quantity of Gold, Tungsten, Americium, Uranium, Rhenium, Platinum, Iridium and Osmium with a thin crust of rock over the surface then the density could be in the region of 20g/cc.

A sphere with radius of about 1750 km would have a surface gravity of 9.78

This is almost exactly the radius of earths moon, it would be about 14th of earths total mass, a little heavier than mercury.

Rare-ish elements but not so rare that a big chunk couldn't be explained as an unusually pure chunk or the heaviest elements from the core of a larger destroyed body or some such.

You might want to cut out the radioactives there since it could cause super-critical complications.

A recent study [1] has found that, despite showing ostensible differences in mass and size, a considerable number of the extrasolar planets discovered so far have a surface gravity very similar to that of Earth.

So, it seems to exist a correlation between mass and radius of the planets in order to sustain this plateau. So, from the figure the answer to your question is: Earth is the smallest reasonable natural planet with Earth-like surface gravity, or Venus if you want do give some concession. 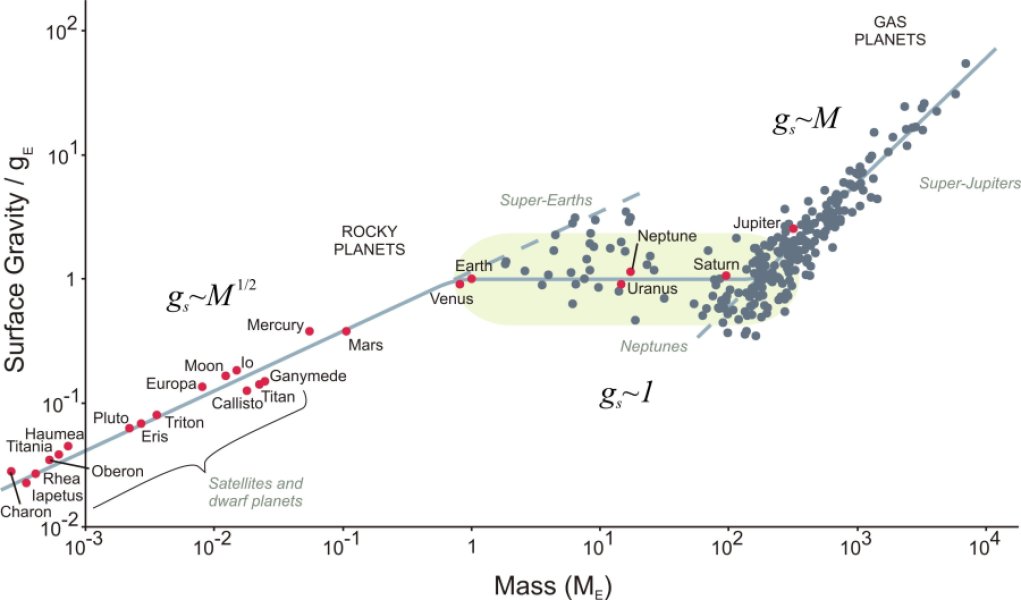 Not the answer you're looking for? Browse other questions tagged science-based planets moons .

3
Would a planet the size of Mercury with the gravity of Earth be scientifically possible?
40
A realistic option for enclosing a geographic area
25
What's the biggest reasonable natural planet or moon with Earth-like surface gravity?
11
What is the maximum orbital time for my moon around my planet?
8
Movement on a small moon with Earth-like gravity
3
Is it realistic to have a livable planet with a quarter the size of Earth, but with the same gravity?
3
Feasible star + planet + moon combo? Did I miss anything that makes this system wildly unstable or otherwise impossible?
0
How big would be a planet with a fifth of Earth's gravity?
-1
Earth-like planet which is smaller but has the same gravity
-1
Estimates for undetectable planets in extra-solar systems
See more linked questions

17
Ratio between planet-size and terrain elevation?
12
What would a planet with no moon look like?
22
Reality Check: Habitable moon around earth-like planet
0
Earth-like planet the size of Callisto with Io-like moon. Plausible?
25
What's the biggest reasonable natural planet or moon with Earth-like surface gravity?
4
What would be the effects of replacing the Moon with an Earth-like planet?
9
How can an Earth-like moon meet these angular diameter conditions?
2
How would the Weather be on a Double Planet System?