How effective (or ineffective) would a makeshift knuckleduster made out of wedding rings be?

Two wedding rings - one on the ring finger, one on the middle finger - and something in the hand to transfer the force to the palm instead of the fingers (maybe a small piece of wood or metal).

How well could this be used as an actual weapon to cause damage with normal punches? Would it be too risky for the user?

Brass knuckles are supposed to take the load off of each individual finger and its joints and transfer to the palm. Problems I can think of using 2 wedding rings and a dowel in your hand:

Tom Brady has a workaround for all of these problems. These Super Bowl rings are made of case hardened steel*. Be careful if you fight him. 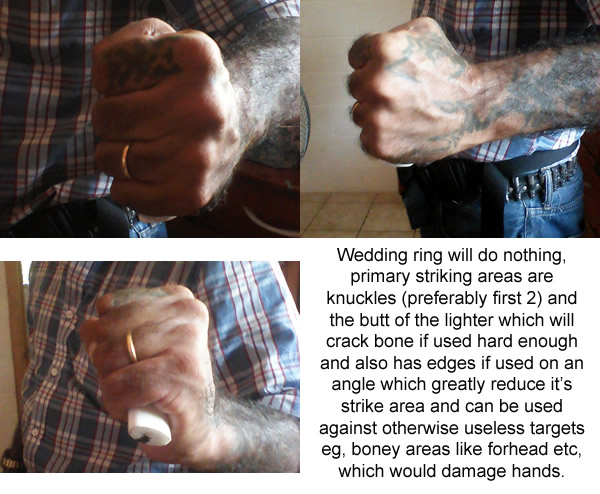 These will not function as knuckle dusters at all. With knuckle dusters you don't ideally impact with your fingers at all, you impact with the knuckle dusters and you use a sort of slight twisting in motion as you punch. Basically digging and ripping rather than punching straight like a boxer. You transfer the force from the palm to the dusters bypassing knuckles and fingers which are vulnerable. With rings your fingers and knuckles are very much in the firing line, you're transferring the force through them, hardening your hand by holding an object which allows you to hit harder without breaking things. But has the disadvantage of making it more probable to impact with the two outer knuckles as well and spreading the impact somewhat (although it makes it harder to break them). Rings obviously can bend or break and cut your hand up.

Wedding bands would be less effective than rings with projecting stones or something like that, and even then that would mostly result in cosmetic damage rather than bone smashing force. you're not transferring force to small points, and if they're gold you may well damage the ring at the same time.

Fighting with multiple rings on can get very messy on the opponent but it can also result in badly damaged fingers when the ring twists and bends against whatever you're holding. It's a staple technique used by many street fighters and good basic self defense in the absence of anything else in places without guns, with a simple $1 cigarette lighter as the object held. Mainly because of the damage and the fact that the butt of the cigarette lighter can be used as well if held correctly. A roll of nickels as suggested elsewhere is not as good. You lose a whole series of very effective possible attacks. And the lighter butt allows damage to be dealt in very confined space when tied up wresting, you only need a couple of inches to make it hurt a vulnerable spot or dig it into a temple etc,.

It all depends on how massive you make it.

From the notorius formula

The rings can act as hard penetrators as a bonus.

2
The Palm Buckler (Blocking With Anterior Arm)
32
Perfect weapon for two-elbow creature
11
How to create a glove that sparks fire when making contact with human skin?
7
Reimagined Weaponry: The Illidari Warglaives
5
Weaponising Implosion instead of Explosion
22
Designing a magic-compatible polearm
31
What would be the ideal melee weapon made of “Phase Metal”?
15
Best Ergonomic Design for a handheld ranged weapon
7
Fantasy weapon physics - weaponising vacuum