A follow-up to my previous question-barrage: Properties of magnetically confined plasma shielding

After some of the feedback, I'm splitting it into several smaller questions.

In the world I'm building up for a game, one of the factions have magnetically confined plasma shielding technology. I'm changing it up and making the shield an active defense, rather than a passive barrier as most forms of science fiction use them. The way they're defined, the heat from this plasma would dissipate quickly and would likely cook the hull and crew/pilot if the temperature could be maintained for an extended period of time.

Not to mention the other effects:

The plasma is stored in a magnetic bottle and kept at high temperature. The gases used for the plasma are the byproducts of the ship's fusion reactor (so anything between helium and iron on the periodic table,) meaning it passively replenishes as the ship's reactor is running. The plasma is vented through a series of ports around the hull then confined in a magnetic field to enclose the ship. The shield lasts up to a few seconds and gives the ship protection to most weapons.

So, what I'm trying to figure out is what this shield would actually look like. Would it look like a miniature star in the shape of the ship's magnetic field? Or would it more resemble a glowing cloud around the ship?

Would the pilot simply see a blinding light from all directions outside their ship?

Altough your engineers could be able to help a little, (who said it has to be in equilibrium) a realistic plasma shield dense enough to have meaningful effect on material projectiles would shine like sun.

Your pilot will not sit behind an armorglass window. He will be in the well armored, closed bridge, and follow the action on screens. Before shield activation armored doors will cover the external cameras, and fire control will be accomplished by X-ray LADARS and computerized extrapolation.

WARNING: I never said that such a shield will work in reality. Even fusion reactors proposed so far are far from the required power, and no calculations were made about the magnetic confinement.

Edit: yes, it would look like a small, very bright star. But with naked eye, simple telescope or camera you wouldn't be able to see it's shape. It is too blinding for this. 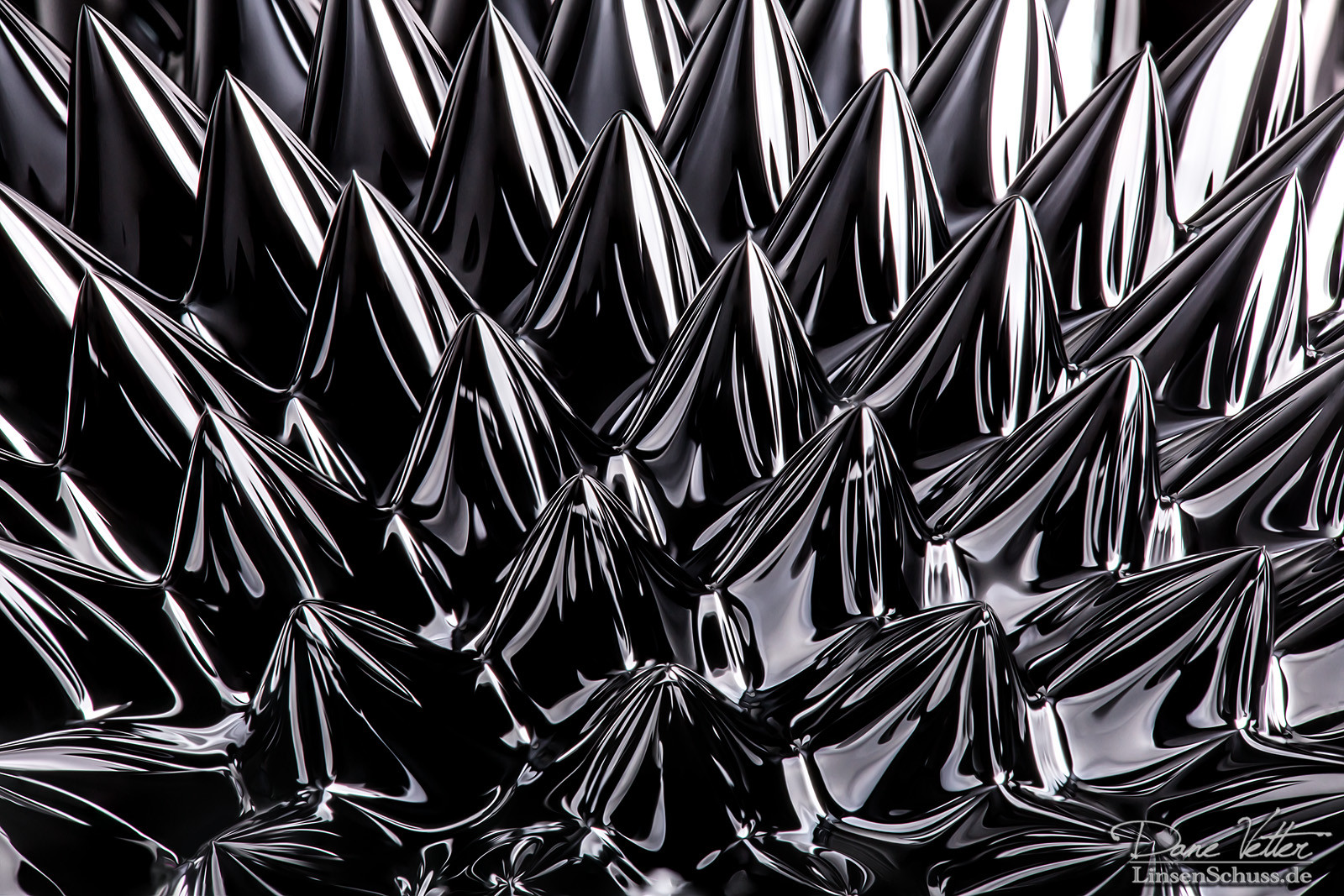 The shield would probably be shaped like ferrofluid covering the ship with magnetic spikes. Check this amusingly narrated video that shows some detail features of ferrofluid spikes I've not seen elsewhere.

The shield would not be a round "bubble" but would flow along the contours of your ship, especially along any sharp protruding edges:

Not to mention it is damn sexy and I have never seen anyone use this shape for shields before, so it might be a unique design for your game.

A magnetic bottle will do a lot in stopping particulate radiation from the plasma from damaging the ship itself, but you will need to come up with something to stop the ship being damaged by the EM radiation being emitted from the plasma. A plasma kept at high enough temperatures will - as previous replies have mentioned - basically look like the entire ship is aflame, or a star. However, this depends on the temperature of the plasma itself, the color and spectrum of the emission will be identifiable from a combination of the Stefan-Boltzmann laws and the Wein Displacement laws (as an interesting meta, this could be used by an attacker to find the peak temp of the defensive plasma). Radiation from the plasma will not just be limited to the visible spectrum, however, and - even in a vacuum - can cause a huge amount of damage to the defending ship's external hull through infra-red emission.

What is this shield used for? If it is for repelling solid slug ammunition - whose offensive capabilities rely on sheer kinetic energy - it's doubtful this would be stopped by a superheated plasma. Even if it were to be stopped, the resulting momentum transfer would be incurred to the plasma itself. If you can counter momentum change of the plasma with the magnetic bottles, then it behooves that the magnetic bottle itself is going to be a more effective shield. The best application for such a shield would be for dissipating harmful EM fields. As plasmas are extremely high conductors, an EM wave would be critically damped by such a volume of plasma through excitation of plasma currents.

Not the answer you're looking for? Browse other questions tagged science-based electromagnetism or ask your own question.

2
Would a nuclear fission thruster with continuous fuel injection be possible?
37
What kind of realistic ranged weapons would be effective in spaceship combat?
3
Using EM noise + computers to simulate sound in the cockpit
4
Properties of magnetically confined plasma shielding
7
Disabling a spaceship while leaving it repairable?
42
How can a space station prevent docked ships from irradiating each other or the station?
0
Can ice asteroids cause an icy ship
3
Solar radiation overflow
9
Ways to detect lasers from afar
4
What would be the ideal way to weaponize plasma?