What natural objects or phenomena would likely be worshipped by blind squid-like underwater aliens?

Throughout the world in the past (and even today in some parts) there were certain things which, in the eyes of humans, must have seemed immensely powerful and even terrifying and thus deserving of (or perhaps demanding in order to avoid their wrath) a priviledged place in their various faiths. These things often became known as creator deities, or the rulers of all other gods. These include, mainly, lightning, the flood waters, the moon, and especially, the sun.

But what would become central in the venerations of blind sentient alien squids?

These are the same squids than in this question, so I'm just going to copy and paste the same details I provided about them there:

These aliens are completely blind, as they branched off from a species that lived primarily in caves and the water they live in is actually a murky water-based solution making vision less useful then here on earth.

They can however very effectively echolocate, sense nearby electromagnetic disturbances and feel the basic chemical composition of certain objects by touch.

Other than the difference mentioned above the bodies of water they live in are essentially the same as our own seas and oceans.

Now, taking into account that they cannot see their sun, the stars or in fact space at all (because, well... they can't see), what would these squids instead recognize as the form of the mightiest gods?

I am, of course, looking for multiple likely possibilities as these squids do not have a monoculture as in star trek.

Note: I want to make it clear that I am not asking how their gods or their religions would be. Simply what would be the "inspiration" (what natural object or phenomena) for their primary god (since like most human religions, most of theirs are also polytheistic).

Historically, humans have created ritual around natural recurring phenomena: the seasons of the year, the appearance of constellations, the changing of the moon from new to full and back. I'd bet that blind squid-like aliens would find analogous underwater forces to explain through religion and ritual. Some possible forces to incorporate into your mythos:

Tidal patterns from gravitational forces are a good analogue for daily rhythms on land. According to Wikipedia, the three main types of short cycle tides are diurnal (one regular rotation), semi-diurnal (two high two low, with one of the two cycles being higher than the other), and mixed (noisy but repeating). In places where each prevailed, the culture around repeating cycles might be different.

Another pattern, long period tides, follows the slight shifts in orbit the moon and Earth experience due to passing planets (Jupiter). This might be a good analogue for constellation shifts.

I'm no oceanographer, but the movement of hot and cold currents around the Earth could be the experiential equivalent of seasons, with one significant distinction: moving currents could impact travel. The blind aliens would experience these as immense forces impacting their habits and habitat. How similarly the aliens approximate squid behavior here is probably dependent on diet and alien powers.

Religious explanation of natural forces follows strong human biases about good and bad events. According to squid jigging (like fishing) guides, squids like high tide and will follow light at night. Blind aliens wouldn't follow pier lights, but might be influenced by tides in squid-like ways.

There's also the motivation of squids' natural enemies to consider, since no religion is complete without embedding survival strategies in its narrative. Fishing vessels catch squids on the full moon when fishing is bad, and there may be similar predator patterns for the aliens. Consider cautionary tales around the natural phenomena that impact the aliens' natural enemies.

There are thing that underwater being would necessarily feel like the other being:

Maybe seen as made by angry earth gods.

Same as both above.

Pools where high pressure makes liquid and toxic CO2, which by primitive species might be seen as magic.

If these creature live by the bottom of the seas and therefore do not float naturally, these will look like bottomless pits, and may even be a place for sacrifices.

Another option would be to utilize there ability to detect electromagnetic disturbances.

These creatures would very rarely feel strong electromagnetic pulses so, a strong one would be unbelievable to them. This would in effect be an unexplainable phenomenon and therefore be a good starting point for a deity. These creatures that would emit the pulses could be Electric Rays or something alike to that. electric ray 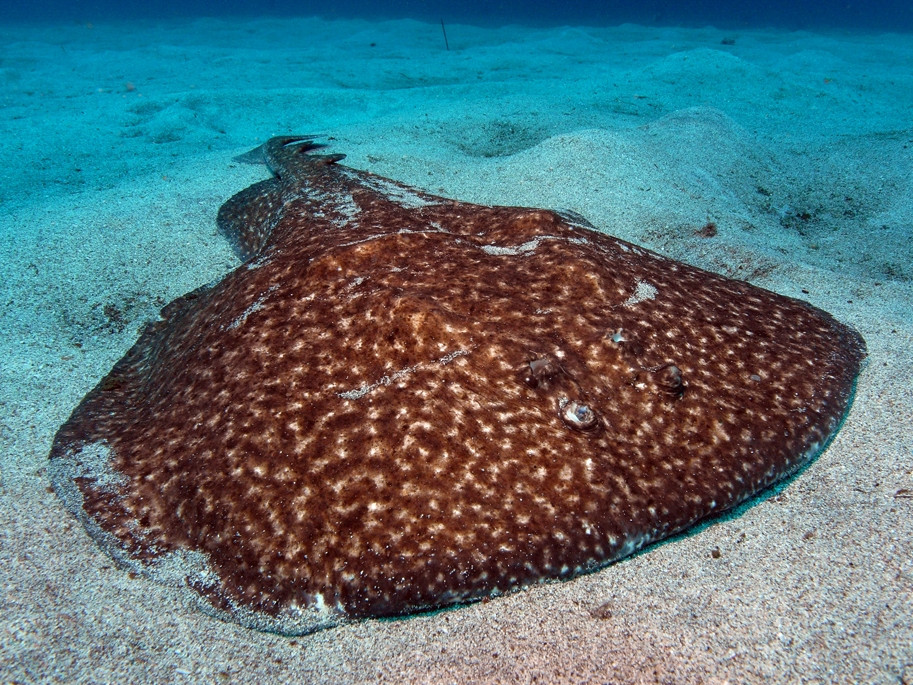 It's worth noting, seeing as how you're interested in constructing a polyculture (good for you, by the way), that there are fundamental differences between various attempts at explaining the natural world and it's various phenomena, as well as various similarities.

For example, just as humans have worshiped deities representing various everyday elements such as fire, water, the wind, and earth, or even more specific things like food/cooking, reproduction, and war, so would basically any culture that interacted with these things on a regular basis. They might also have deities for various emotions or phycological conditions they experience, such as love, fear, and wisdom. So as long as your aliens need to eat, sleep, struggle, reproduce, feel, think, and otherwise interact with their material and phycological environment, I see no reason they should not have deities for these things, just like humans. This might, in short, lead to a kind of polytheism or pantheism, thus creating the first of many possible religious factions in your alien polyculture.

On the other hand, you would also find certain mythologies and traditions that attempted to explain the very existence of fire, water, the wind, earth, food, life, reproduction, etc. in the first place. This might lead to either a sort of pseudo-polytheism, in which various gods existed, but where one major God or Goddess existed above all the others (such as in the case of the Egyptian pharaoh Akhenaten, who glorified the Sun-god Aten over all the others). Since your aliens don't have the visual sense, and would thus have no reason to admire light (though I don't know about heat), they may, in fact, worship some great sound-deity, as their reliance on echolocation is, in fact, their stand-in for sight.

To take this whole pseudo-polytheism thing a step further, you would probably have some religious faction that practiced outright monotheism (the worship of only one, all-powerful and all-controlling God or Goddess), as a means of explaining the existence of the entire cosmos as a whole, not just one element or part of it. Depending on what stage of history your polyculture is in, this monotheistic tradition may or may not be the dominant worldview of the time (many experts think, while it's unclear what the "first religion" was, that animism and polytheism were the dominant human religions in our ancient past, whereas the dominant religions of modern times are monotheistic, i.e., Abrahamic religions).

Either way, it all depends on what the particular factions of your polyculture value and rely on, and, most importantly, what their basic worldview is.

This is brief, but probably the same as humans: the sun, or the moon. Just because they are blind doesn't keep them from being aware of the heat of the sun or the tides caused by the moon

I'd consider carefully the suggestions presented by @LudovicZenohateLagouardette and look for ways to turn them into metaphors for gods. The ideas there are very consistent with early mythology in general. I'd look at places like Egypt and the Ancient Near East, which have more fundamental representations than later, Classical mythology. (If you want more info, I can elaborate. For instance, The concept of unfathomable trenches brings to mind Ginnungagap, which can be embodied in the spirit of the Greek Χάος)

In terms of direct suggestions, off the top of my head:

Liminality is perhaps the most important aspect of mythology, as nearly all cycles are concerned with binaries such as life/death, winter/summer, etc. (i.e. Pagan religions tend to be focused on the cycles of generation.) The concept is doubly resonant here in that important definitions of "liman" are maritime and fluvial.

Not the answer you're looking for? Browse other questions tagged aliens religion underwater .

14
Writing system of blind, sea dwelling sentients?
14
What would be the mythology of an aquatic species?

17
How would people most naturally react to a new god in their *own* polytheistic pantheon?
27
Why would a scientifically advanced future community believe in multiple gods?
14
Writing system of blind, sea dwelling sentients?
9
How can religions be structured in ways that allow inter-faith councils to work?
8
Magic and Language Problem