Conflicting milestones, what to do?

My Kepler Bb humanoids develop cognitive, social, and motor skills faster than humans. Their growth rate though is slower than it is in humans. And they are physically gender neutral until 5 years old(the only way to tell gender before 5 years is via a genetic test).

1 very important motor skill that is absolutely essential for living underground is climbing. The baby room has rocks that go from the crib to the chamber right above it. This helps them climb. 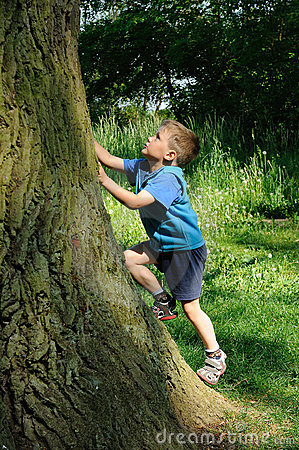 It is kind of like a human child climbing a tree except that with shorter arms, many more rocks are needed.

But yeah, these babies are able to climb at 2 months old(or so I thought). Just to put that in perspective, the year on Kepler Bb is 20 months long and a 2 month old human baby can't do much other than smiling and push ups.

So that means that they would have to be able to get up by themselves practically from birth or at least a few weeks after birth.

A newborn standing in just a few weeks is a bit too much in my opinion.

So I have these major motor milestones so far:

What should I do about this climbing milestone? I still want it before 1 year old(so before 20 months) and I want it as early as it is plausible. But if climbing requires that the baby gets up, than that would require the baby to be able to stand up(and not just as a reflex).

Carrying this over to climbing humans, they'll probably start to climb around the same time as they start to walk. Based on your development chart, this will probably be around 9 months of age.

One other important thing about baby chimps is that they aren't left on their own on the ground. Instead, they tend to cling to their mothers or other older relatives most of the time, which they're capable of doing from a much younger age than they can climb from. Climbing humanoids would probably do something similar, since my guess would be that this stage of development is important for developing grip strength, which is critical to climbing ability.

Else you would just rely on your arms and legs to move your body around with a loose abdomen.

In your development line, this appears to be between 3 and 6 months.

What is their native environment like? Why the need to climb?
You mention that the nursuries have rocks which lead up from their cribs.

Consider kangaroos: when born, the fetuses must climb up from their mother's uterine portal to the pouch on her belly. There, they attach themselves to a nipple from a mammary gland and continue to grow. They won't be developed enough to stand, much less hop, for several months.

Are these humanoids of yours placental, marsupial, or some combination? Well, that doesn't really matter all that much; marsupials can have a smaller birth weight but they require earlier development.

You didn't mention the developmental milestones for a few other things, like rolling over or crawling — it looks like we could place those at 6 weeks and at 5 months, respectively. However, that doesn't necessarily matter:
If the environment in which these infants are required to climb does not require them to use the postures and movements necessary to crawl or turn or sit upright, then there's no reason why they couldn't be able to do so much earlier than those other things.
The environment being conducive is quite necessary, though, unless your humanoids go through different development compared to us: e.g. lower birth weight, earlier development of torso compared to hips and legs.

2
Increased intracranial space
22
Physical correctness of trolls with high regeneration ability
4
Reasonable starting population?
3
Childhood versions of sex hormones, Plausible?
0
Shedding rate reasonable?
14
What would be the psychological differences between a human and an intelligent detrivore?
4
Keplerian Life Cycle: Old age
3
Ovulation dependent menstrual cycle?
7
How can I explain the evolution of my giants?