An unusual crime-and-punishment scenario - is it plausible?

In this scenario, there is a particular regime wherein the punishment for any and all violent crime is the same- a single gash to the neck.

Upon pronouncement of guilt by the crown or a recognized officer of the crown, a warden will place a small but extremely sharp dagger against the convict's neck, apply just enough pressure to slightly dimple the skin, then rapidly withdraw it along its own axis.

Here's the twist- the victim, or a close family member if the victim died during the crime, may instruct the warden on the exact placement of the dagger. If the victims feel generous or forgiving, they will pick a position unlikely to cause lasting harm; if they want vengeance, the dagger will be positioned elsewhere. In any event, the convict is free to leave immediately after the punishment is administered, including to seek medical attention.

The warden may not advise the victim, but if you know the right people to talk to, anyone can learn the concepts beforehand. Experience from prior punishments has made it part of the collective knowledge that if you position the dagger just so, there will be a lot of pain but the convict will most likely recover in a few days. Move it around just a bit, you will sever a certain nerve and cause partial paralysis. Move it up or down a notch and the convict will bleed out from the jugular long before he can get to help.

Is this idea plausible? In other words:

Other assumptions/ background, if needed:

EDIT: Here is a very rough doodle of what I have in mind, both a top view and side view: 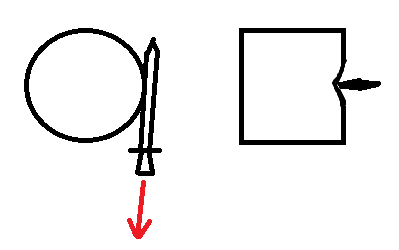 Consider first the level of medical expertise in the late 1700s--if indeed, as you say this is analogous to our own levels of knowledge during that time.

What you are talking about requires precise medical knowledge that we did not have during that time.

In the late 1700s autopsies were just getting started--and became a big deal for about a century, mainly because the knowledge base at the time was not very precise.

Even in the early 1900s, mistakes were made--for instance, regarding SIDs in babies--autopsies on healthy, well-cared for babies were rare--it was only done in cases of SIDS or from extremely poor families. Scientists noticed that all these babies had an enlarged thalamus (and indeed, for a while they recommended radiation treatments for the babies of nervous parents to shrink the the thalamus). But what they didn't know was that ALL babies have larger thalamus, and falsely correlated it.

That's just one example of many. At the level of late 1700s early 1800s medical knowledge, it's not all that realistic that even doctors, let alone a lay person would be able to understand exactly what a cut like that would do.

That being said, if this has been within the culture for a very long time, trial and error might have taught them what our culture didn't know as a result of this.

I can see an entire profession springing up around this, as well as specific research being done in this direction.

Does human anatomy include distinct positions along the neck that can result in a. mere temporary pain, b. partial paralysis, and c. rapid death, given a single shallow gash at just that right position?

Let's go for the classic, which they WOULD know about because it's so big and obvious: the carotid arteries.

A shallow cut would not be enough to penetrate the carotid. When doing an autopsy, digging those out is not fun and is difficult. While you can feel a pulse there, the actual artery is protected by muscles (like the sternocleidomastoid muscle).

In fact, anything that's super shallow via the neck, would not have a good chance of doing the kind of damage you're talking about.

The closest-to-the-surface major vein would be the external jugular. That's our most vulnerable point, but I don't know that I would call that a shallow cut. Maybe you need to define shallow. Because if you're talking about an inch into the neck--that's not what I would consider shallow, or even half an inch...

When it comes to wound classification, a superficial wound only penetrates the epidermis. More serious wounds penetrate the epidermis, dermis, fat and muscle. And frankly you do have to get through at least a few layers to get to the jugular. Compared to the other veins, yes, relatively shallow.

There are nerve clusters in the neck, and along the spine, yes, but most of the major ones are fairly well protected by musculature.

It's also difficult to partially sever any of these and would require cutting around the nerve to pinpoint them.

Can these points be easily taught to lay people?

Not in a precise way, no. You'd have to have plenty of practice with dead bodies for certain.

Is this a plausible punishment? Absolutely, not! Simply look at the types of punishment practised in the 1700s and it will be entirely obvious that such a surgically precise form of punishment is conceptually untenable.

People at that time didn't think in these terms. They believed and practised much more robust and brutal forms of punishment. This is punishment by and for wimps. This doesn't make sense when the alternatives are hanging or flogging or even torturing someone to death. The guillotine comes later in the 18th century and that was regarded as a humane form of execution.

There wasn't the understanding of human anatomy that would generally make this form of punishment even remotely credible.

The only way such an esoteric, arcane and generally bizarre form of punishment might be vaguely plausible was if it was applied specifically and exclusively to members of the aristocracy for any crimes of violence they committed or for which they were found guilty. For peasants and members of the other lower orders (people like us) there would remain the whip and the noose. To be credible, it needs special social and political conditions to make it even remotely feasible.

I might suggest you expand the punishment to Neck and spine, or even just along the spine.

Right up at the base of the skull, a short knife could penetrate deep enough to nick the brain stem and cause death. A little lower, between the vertebrae, and you could cause total paralyses, which would mean a slow death in the time frame you are talking about.

Much lower and you could cause a loss of lower body function.

Back to the neck, It's pretty easy to figure out where a blade will or will not kill, through a carotid artery, or through the vocal chords for a chancy but possibly non lethal option.

Overall, a wide cross section of the population should know enough about gross anatomy to be able to place a shot for the desired effect. This is because a lot of them would be familiar with animal husbandry and hunting. City dwellers might be a bit behind the curve though. If the punishments were public, the knowledge of stab placement would become fairly well known, if not widely discussed

You can probably do the kind of damage that you're talking about but not simply and not really reliably, humans are too variable in exact anatomy, at the exact nerve and blood vessel track level for this kind of thing the be standardised. That's with modern medical knowledge but not the active scanning technology, if you want to go with 1700's medical knowledge as well as technology then no way no how. It wasn't until the latter half of the twentieth century that medical texts included information gained from actual human beings rather than animal carcasses.

16
How does crime start in a settlement
8
How to make crime literally not pay?
5
Realistic legal punishment in post-apocalyptic setting
28
Can crime still exist if mages can see the past?
37
How to organize crime?
24
How would deafening as punishment be carried out?
8
Is this sudden global cooling scenario plausible?
4
Is this habitable moon formation scenario plausible?