Other, non-synthetic materials for drum heads besides animal skins

I am writing about a race that uses almost no animal products (nothing that kills the animal; dairy products, eggs, cast-off deer antlers, wool, and honey are fine, and the verdict is still out on fish products). I was wondering if there was anything they could use for drum heads besides animal skins? This is set in the late 13th century, so there's no chance of them using any of the synthetic materials we use nowadays. Also, it's in the Netherlands, if that helps with the materials (albeit in something of a different "part" of the Netherlands - imagine a gated community where the gates are magic instead of anything physical - so they have a few different flora and fauna to work with).

EDIT: I forgot to mention, metal is also entirely out of the question.

Why not use the wood itself? 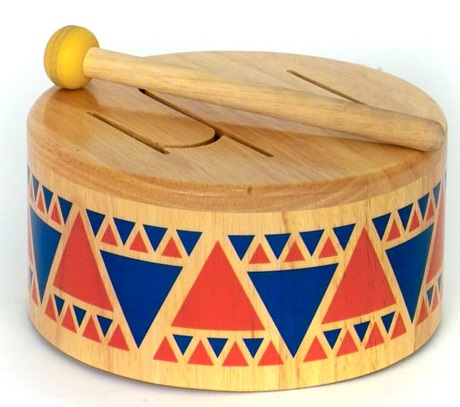 There's any number of drum variations that don't use a skin as such - primitive ones are simply hollowed out logs.

Canvas covered with boiled linseed oil. Basically you will have oilcloth, or (if slightly different process is used) thin sheet of linoleum, sans fillers. It has elasticity and thickness similar to leather, and is similarly airtight. Should work all right.

Still, ability to wet form leather or rawhide makes it superior material, so you need really solid reasons. On the other hand, you can apply oil to canvas already stretched on your drum, so this difference shouldn't be crucial.

Your people could even experiment with different canvas types (cotton, linen), different thickness, different ways to boil oil, giving them much more flexibility in drum creation than leather and rawhide does.

No, not the modern, short-fiber crap you get from the dollar store. You want the good stuff made of long fibers like flax or cotton. (basically what they use for making paper currency). It's really quite strong, and air-tight, and a few layers of it would make a decent drumhead.

Similar idea to the paper, but you'll have to add a sealer to make it air-tight. Said sealer needs to be flexible enough not to crack when it vibrates, but there are many options. Boiled linseed oil has already been mentioned. Asphalt would work (I'm not sure what there are for oil deposits in the Netherlands, but just about everywhere has some amount, even if it's not enough for modern industry to bother with) So would latex (there aren't any rubber trees in the Netherlands, but you don't need full rubber elasticity, just something close. Pine tar gets too brittle, but there's probably some plant species that would work.)

The key to a good drum is for the strike surface to transfer energy efficiently to the air. As such, you want something large and light and resilient enough not to break as it vibrates or when struck. Wood tends to get you two of the three, which is better than nothing. If you want to get all three properties, you'll need to find a tree species that is straight-grained enough that it can be carefully shaved down to almost paper thin and still have continuous fibers from one side of the drum to the other. I'm not sure what there is in the Netherlands, but trade in exotic woods has been around a very long time.

Cast glass is easy to break, but blown or spun glass aligns its structure in a way that makes it far more resilient, especially if a tempering step is added. The hard part about glass is that it's usually only resistant to being struck from particular directions, with strikes from other directions causing it to shatter. The fun part about glass is that you don't necessarily have to sound it by striking it; rubbing it with a wet hand will usually do. Imagine something big enough to have the frequency of a drum, sounded like you would a wine glass...

I know, you said, "no synthetics," and modern plastic is definitely out of the question. But humans have been making polymers of various types for a very long time. The reason leather gets hard enough to be armor when you boil it is because the natural oils in it turn into a form of plastic. The "seasoning" layer you create on a cast iron cooking pot or pan is (if you do it right anyway) a form of plastic. Linseed oil is famous for curing simply by sunlight exposure into a (very soft) plastic. All you really need is an oil (lighter is better but almost anything will do) a controllable heat source, and maybe a bit of acid. A naptha seep would do, as would a number of plant-based oils. Creating a drumhead would likely be a painstaking process of slowly layering and cooking the oil as precisely as possible. Undercook it and it'll stretch, overcook it and it'll crack or shatter, but I've made several interesting polymer compounds just playing with melting various types of tree sap over a camp fire. A culture that was dedicated to not using animal products would have an incentive to refine that process since lots of primitive waterproof containers depend at least partially on animal products and they need a substitute. The big question is whether their society is wealthy enough for anyone to have the time to make a drumhead this way. If they have no metal, then probably not unless their area is so lush they have no need to cultivate food crops or so temperate they have no need to make clothing or shelter.

This is almost the same as glass, but you're relying on finding a drumhead and maybe shaping it a little rather than creating it from scratch. Certain types of stone, especially crystals like quartz, do have reasonable resonant characteristics. The hard part is finding a piece big enough to make a decent drum. It might be something they'd have to trade for with a more volcanically active area.

Just about everything else I can think of involves and animal product or metal in some way, or is an alternate method of construction for the materials I've already mentioned.

How about glass? From https://www.pinterest.com/afshepherd/musical-glass/ 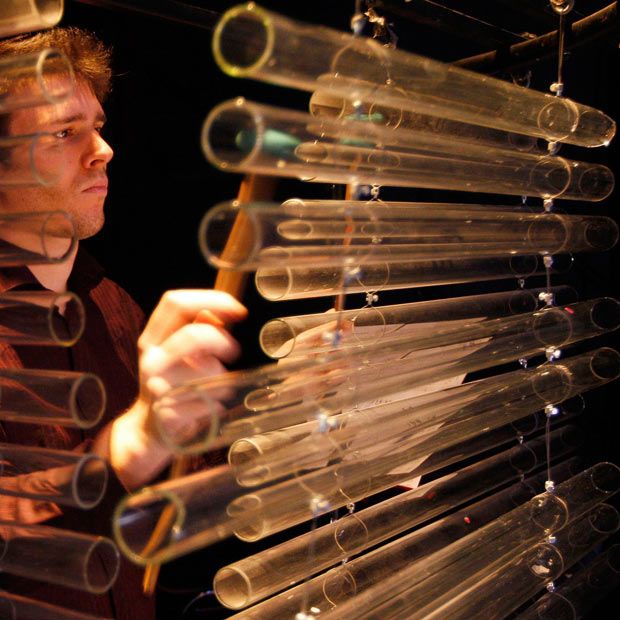 Glass would, of course not be a stretched drumhead because it is not stretchy. Glass can be strong and you might be able to get up to some Kobe-style taiko drum action with big pieces. But even 11th century medieval tech could make small pieces. And: you can tune it.

It's a bit hard to source in 13th century Holland. If your magical enclave has access to non-native plants then rubber trees are within the realm of possibility.

I was thinking along the lines of springroll skins that have been modified to be more resilient when used in larger surfaces. When reading about it taking place in the Netherlands, though...

They're famous for their dairy.

When you boil milk, a skin forms on top. Dairy-experts like the Dutch can no doubt find a way to make that skin strong enough to be used for drum heads.

Alternatively they could have a specific kind of cheese rind, which could serve as drum head.

To give you an idea of the possibilities, you can read this article: http://www.dailymail.co.uk/sciencetech/article-2026645/Bulletproof-human-skin-spider-silk-goat-milk-developed-scientists.html

The article talks about altering milk to contain silk spider protein. The milk can then be processed (like spinning it) into a skin that can potentially even be bulletproof. As an added bonus, it's a Dutch researcher who works on this.

Gourds, after drying, have been used to make drums and rattles.

On this pretty Spring morning, here's a link for seeds: https://shop.nativeseeds.org/collections/gourds

I can imagine all sorts of witchy, mana-enhancing growing styles. The links to Jack-o-lanterns alone are pretty evocative. Consider the magical consequences of the difference between a hollowed-out 100-year-old log and a 4-month-old gourd.

Komboucha Leather. A symbiotic culture of bacteria and yeast (scoby) grows on a food of sweetened tea. The scoby forms a thickly layered film at the top that is stretchy and dries hard like rawhide. Side effects: your people will all have healthy guts from drinking komboucha

It's a bit of a hype that they can make fungus-based “leather” now:

Allegedly, this stuff can be made with properties very like animal skin, so it should be feasible for drumheads. It's also said that it doesn't require any artificial chemicals (I'm a bit sceptical), so at least it's not completely absurd to see this in the 13th century.

Many varieties of udu or chambre drum can be made from clay.

Bamboo can be made into windchimes, xylophones, slit drums and tubula.

Many kinds of instruments can be made from bone, and obviously your folk don't have to kill an animal in order to harvest them. Apart from whistles and flutes, they can make tuned osteophones or untuned windchimes or rhythm bones.

We'll let Nature speak for herself. Obviously your people would need a cavernous chambre with good acoustics and, well, stalactites galore!

If your folks like a bit of winter wonder music.

Not the answer you're looking for? Browse other questions tagged magic materials music or ask your own question.

6
Foraging behavior of a forest slime