Powering a starship with solar cells

For a while now I've been building a science fiction world and I've been thinking what would be a feasible way to power a large ship capable of interstellar travel. I've always disliked the idea on a potentially explosive engine on a ship.

What I am wondering is how feasible is solar power once the ship leaves a star system and travels into deep space?

Solar cells would work well inside a solar system, but long distance travel will be limited by the batteries. Note that batteries are also relatively heavy and would thus take more fuel to move. Ideally, you'd want a propulsion system and its fuel to be low on mass.

(Extension: it is about a Sun-sized star from 1.5 light year away. But the sky has a lot. Although they are far more away. Maybe their summed result could be even thousands times better, but I think it is still far from be enough.)

Problem #2: On Newton's second law, you can only drive the spaceship, if there is something what you can shot out from it. The solar power gives energy (quite few), but if you solve this problem somehow... for example, you use astronomical sized (i.e. million km big) solar panel foils... even in this case, you need to have some fuel.

Although I wouldn't say it a completely dead idea; with solar power it doesn't seem to meaningful, but there is a so-named Bussard ramjet: 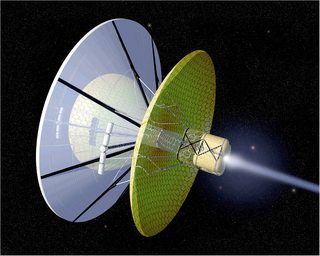 The idea is to collect the interstellar gas with big electromagnetic fields, fuse them in fusion reactor, and shot them out with the produced energy.

Even this idea is in best case in the very far future:

The power available to a solar array decreases as it gets further from the sun. It's the same reason we can't generate power from starlight.

Currently the furthest from the sun we have sent a probe powered by solar panels is the Juno mission to Jupiter.

Further out than that we resort to radioisotope thermoelectric generators to power our probes.

13
Could a solar system with large amounts of dust and debris exist?
18
Runaway Starship Ramps
13
Can I detect one ship arriving in an otherwise abandoned solar system?
6
Can electronic warfare be used to bring space combat into visual range and protect fighters/bombers?
5
What is a reasonable energy solution for a proposed solar system wide Laser Propulsion array?
5
Space ships with launch engines AND space engines
20
Beyond Futuristic Technology for an Alien Warship?
4
Building an interstellar starship during transit