How might a life-sustaining planet exist with an “atmospheric ocean”?

This might be a little difficult to explain, but basically: the concept of "atmospheric ocean" is a gas that is found pretty much everywhere on the planet. Probably very dense and sinks to the surface, creating a gaseous ocean at low altitudes (such as in valleys).

Essentially, I'm trying to blur the line between a "sky" and a "sea" to make them both out of the same substance, while still making it able to sustain an ecosystem. Is this plausible?

Sulfur Hexafluoride is 6 times denser than Earth's air, but far less dense than water. It is possible that on a high gravity planet with a cold and quiet atmosphere it would settle out and form the gaseous sea you are talking about. But it would have to be very cold and calm.

There are a couple of problems. You may be familiar with density towers of liquids. Liquid density towers separate based on density, but their separation is held together by cohesive forces in the liquid. You need liquids that won't quickly diffuse and mix into one another. Oil and water do the trick. The density tower I linked uses various forms of sugar water (honey and corn syrup) because they are very viscous and diffuse slowly. It also tells you to be very careful to not agitate or mix your liquids up. They will not separate very fast.

For gasses, density separation is theoretically possible, but more difficult. Gasses diffuse easily and there are no cohesive forces holding them together. They have a low viscosity and mix more easily than liquids. On Earth, sulfur hexafluoride does not separate out of our atmosphere despite the fact that it is far more dense.

The other factor is weather. If your planet does have separated gas, a good storm can mix it back up again. Wind is not your friend.

To summarize, this planet becomes more plausible if you have a cold planet with high gravity, and no violent weather. On an Earth-like planet, even the heaviest gasses will not separate. I have no idea how cold, high gravity, or quiet your planet would have to be.

They are likely to have extreme and exotic atmospheres due to their short periods, relatively long days, and tidal locking. Atmospheric dynamics models predict strong vertical stratification with intense winds and super-rotating equatorial jets driven by radiative forcing and the transfer of heat and momentum.[13][14] The day-night temperature difference at the photosphere is predicted to be substantial, approximately 500 K for a model based on HD 209458b.

The available energy on a hot jupiter suggests this could be conductive to the formation and evolution of life. However, it will generally be a 'hotter' biosphere than that on an Earthlike planet.

The Christian Bible has a rather fascinating verse in its account of creation that some have attributed to there being a "water canopy" that existed in the time between Adam and Noah (the latter being famous for the greatest flood of all time). I don't know how many ascribe credence to this theory (Biblical Creation is a controversial subject on its own) but it does make for some interesting scientific theories related to your water world

Many creationists have attributed this to a water vapor canopy that was created by God on the second day, the “waters above the firmament” (Genesis 1:7). This theory holds that a “vast blanket of invisible water vapor, translucent to the light of the stars but productive of a marvelous greenhouse effect which maintained mild temperatures from pole to pole, thus preventing air-mass circulation and the resultant rainfall (Genesis 2:5). It would certainly have had the further effect of efficiently filtering harmful radiation from space, markedly reducing the rate of somatic mutations in living cells, and, as a consequence, drastically decreasing the rate of aging and death.”(Morris, Henry, Scientific Creationism, 1984, p. 211.) Citing evidence of denser atmosphere in the past, Morris postulated that this vapor layer could have dramatically increased the atmospheric pressure on the surface of the early earth, again contributing to a healthier environment (like a natural hyperbaric chamber). Later the canopy would have collapsed in the form of rain (the “windows of heaven” in Genesis 7:11), contributing to the Flood water, and resulting in the dramatic drop-off in longevity after the deluge. 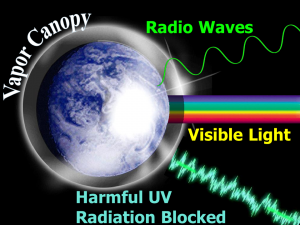 I think it gives you some ideas in world building that, at least rationally, make sense

I don't think such an environment can sustain life. Possibly because of:

That would be pretty much enough to physically and chemically annihilate all life forms, including "The Tardigrades".

You are thinking of something like a supercritical fluid. Hal Clement did this in Close to Critical and I think the world described in this answer is close to what you want.

I envision, for example, the group descending deeper and deeper into a canyon, and the fluid around them changes in composition gradually. There is a formal level they refer to because that's as high as the “sea” life can rise, using its swim bladder boyancy mechanism. The biome shifts beyond that point, but you really can’t tell that's where the sea begins. The exact level varies with the weather.

Above, on “land”, animals can swim through the dense air, and crawling forms need to contend with the high density (try walking under water!). See the Wikipedia page concerning how such fluids are intermediate in density compared to gasses and liquids.

If you consider "alkane" to be your gas/liquid of interest you could do this. Alkanes spread out over the spectrum depending on temperature. At earth surface temperature one can have lakes of long chain "asphalt" hydrocarbons - a mix of various length alkanes which probably exist in some sort of equilibrium. 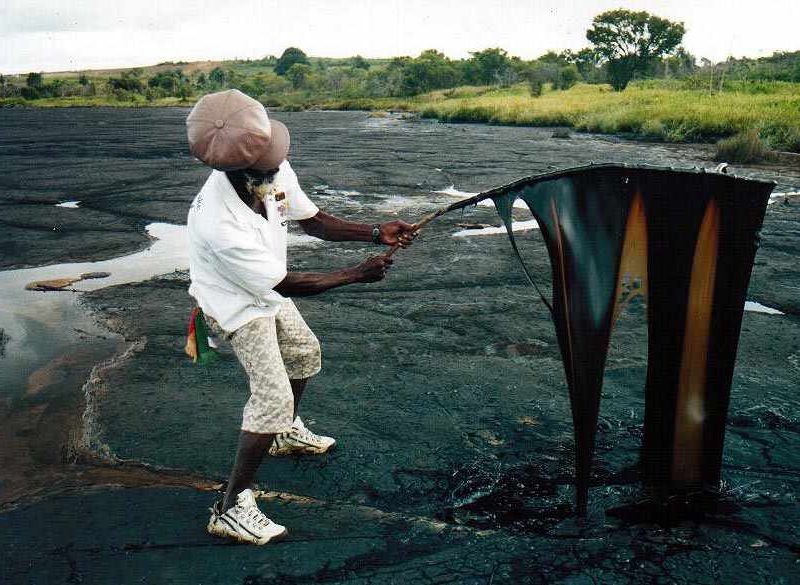 Underground oil deposits are probably similar but with more shorter chain molecules which cannot volatilize away or oxidize away because they are stuck underground. The lakes on Titan are short chain alkanes which are liquid because they are cold. If there were a reducing atmosphere (no oxygen or chlorine, just ammonia and hydrogen) the alkanes would be stable. I can imagine lakes of this stuff being at equilibrium with the atmosphere.

Ammonia would be a fine candidate too, either alone as your gas of interest or in this hydrocarbon mix.

The story takes place on a planet where the prevailing atmosphere during daytime is just barely above the gas's critical point. At night the gas condenses into huge drop that drift slowly down. Ocean levels change by tens of feet overnight.

I think you can do this with Water Vapour at the right temperature/pressure regime you're basically in a super dense fog but that's going to be a very strange world, and I don't think it would be dense enough to do what you want to do either, not on Earth anyway.

You're talking about a liquid not a gas to get this effect I'm pretty sure, micro-droplets that can float in the air like fog, gases mix too easily and don't separate out due to differences in pure gas density.

A world wouldn't work very well in the universe of physics as we do it, the gases that would work on Earth are either too unstable or too stable to be used by life as we know it, a Gas torus though, especially an artificial one might work because you could set up whatever regime in terms of atmosphere that you wanted/needed.

Not the answer you're looking for? Browse other questions tagged planets environment atmosphere water-bodies or ask your own question.

11
Can liquid water exist on a planet without atmosphere?
4
What would happen to the ocean when lowering atmospheric density?
8
Semiliquid atmosphere - Is my premise/conclusions correct; and will it get the result I want?
9
Would a shallow ocean planet be possible?
24
What effect would liquid sulfur oceans, sulfur dioxide in the atmosphere have on visibility, sound propagation and other environmental information?
5
Is a snowball planet a necessary step in the evolution of a life-sustaining ocean planet?
10
Determining climate and biomes in a non-planetary setting
9
Feasibility and consequences: the cosmic dance of twins habitable moons
3
Planet With Higher Atmospheric Pressure