What metals will a culture most likely use if use of iron is prohibited?

What metals will a culture most likely use if use of iron is prohibited but it has advanced technology?

The main problem for an iron-less advanced civilization is machine tooling. Modern tool steels are incredibly versatile materials, capable of being forged and machined into highly complex shapes yet made hard enough to cut through most materials and durable enough for repeated hard use, such as in jackhammer bits (if you think a sword has a hard life, it has nothing on what jackhammer bits go up against day-to-day). This is something almost no other metal or alloy can pull off -- even high-tech metals like titanium struggle to match tool steels in hardenability.

As a result, this civilization would have to develop a tool technology akin to cemented carbide very early on. If they were able to refine a titanium-like metal to serve as an elastic matrix material, and had access to the relatively common mineral zircon as well as a supply of graphite, then zirconium carbide can be made by calcining the zircon then performing a carbothermic reduction on the zirconium oxide produced when the zircon (zirconium silicate) is calcined. Otherwise, aluminum carbides can be formed by mechanical alloying of aluminum with graphite, and silicon carbide is another option (it can be produced by intensely heating a mixture of coke (amorphous carbon) and aluminosilicate clay in an inert crucible, or is common naturally in the universe albeit rare in Earth's crust).

Once you have carbide particles, you can then basically mix them into molten metal without too much worry about them dissolving due to their refractory nature. The resulting cermet material is suitable for tooling due to its aggressive, abrasive cutting nature and good wear properties. It requires an aggressive tool to machine, though, which would mean that getting started with it would be a bit...tricky.

Forbidding the use of iron will be creating problem mostly in civil engineering, where steel is used for reinforcing concrete. Hardly any metal can replace iron in this case, since it is hard to find a suitable combination of tensile strength and thermal expansion coefficient. Plausible replacements in this case would be bamboo, polymer or carbon fibers.

For the rest the culture would be using all the metals we are already using.

I wonder if any culture can obtain a high level of technology without iron in the first place. So this is sort of a contradiction in itself to ask this question.

Anyhow, let's examine where iron is used in modern times by humans and what replacements could be used. I am assuming that all the replacement metals are available cheaply and in excess.

This would perhaps be the hardest to find replacement. Possible substitutes would include cobalt and nickel.

Titanium could be an excellent replacement for iron when it comes to tensile strength versus weight. It would be the first choice as a building material metal and building skeletons/bridges would use titanium instead of iron. Aluminum would be another alternative for a few possible circumstances.

Here again, the best replacement which comes to mind would be titanium and aluminum.

And the Achilles Heel...

All complex animals require substantial amounts of iron in their blood for oxygen transport. It is understandable to build a world where iron is prohibited from usage, but do not go on to build a world where there is no iron at all. For such a world, you would have to redesign the blood type of all complex animals or design a different respiration mechanism for them.

Iron isn't magic; it's just cheap and easy to work. There are lots of alternatives.

For instance, aluminum in the right alloys is scary strong; it's just more voliminous than most other substances it might replace. Instead of this lightness being seen as a virtue, it's the source of endless bigotry; for instance no-one will admit aluminum is the best electrical conductor known by mass, some other units, and for many of the practical things we do with conductors. And by a huge margin, e.g. twice the conductivity of copper and silver by mass, and twelve times better than copper when the unit of measure is money. Back on track, aluminum is stronger by mass than iron/steel; it's not the only one.

Aluminum is also staggeringly plentiful; it's the 3rd most common element by mass (despite being light) in the Earth's crust (i.e. places people are likely to mine). It's everywhere, just trapped in an oxide form. The limiting factor is the electricity used in smelting.

Carbon fiber is stronger still in both mass and volume, (and potentially even a better electrical conductor), so that becomes a silver-bullet solution anywhere aluminum is not suitable.

Where high-temp is required beyond aluminum's ability, there is titanium, palladium and more exotic metals. And let's not forget bronze.

Massive steam projects would be hard; cheap high-temp piping makes that possible; i.e. factories or ships which primarily run on steam. But those are "on the outs" anyway; a modern ship doesn't have boilers, it moves energy around the ship electrically, and either has slow-loping diesels that could be made of bronze, or jet turbines that are already made of exotics.

Fully nonferrous ships have been built; it's done in minesweepers and the famous Soviet "Alfa" submarine, built to elude magnetic-anomaly detectors.

Iron can be prohibited most likely on religious reasons. For example, the ancient agyptians couldn't yet produce iron from ores, their only iron source was from meteorites. They've also seen, that it is much stronger as their copper and bronze tools. They've considered it as a metal of he gods, and they've used it in jewelry. There are even ancient agyptian jewelries where iron is embedded in gold!

Thus, a relegious reason to forbid iron is quite possible.

What they would use instead, it depends on their technological level.

First, they would likely remain in the late bronze age - it would significantly slower their technological advancement, but won't stop it.

Later they will use metal tools which are not really more rare, and aren't really harder to process them, as iron. I would vote mostly on similar metals as iron - maybe cobalt or nickel.

Later, their high tech industry would probably use our newest things - titanium, molibden alloys, and aluminium.

Note: a culture without iron surely can't produce weapons so well, as their neighbours not having this little uncommon custom. Around from the years of the early medieval ages, it would cause an uncompensible technological disadvantage in the military technology.

Compare this to our fast conquest of the ancient American civilizations. For example, Cortez with 1000 men could win the main aztec army with 300000, only because they had iron swords, armors and muskets (and horses).

Meanwhile, the main "sword" of the aztecs was from wood injected with obsidian spikes, like this. Yes, this guy on the left looks quite dangerous, but 1000 knight on the right site, full in iron, could win 300 000 from them. 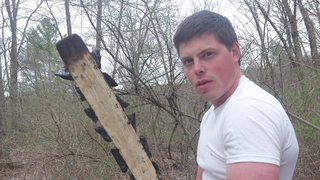 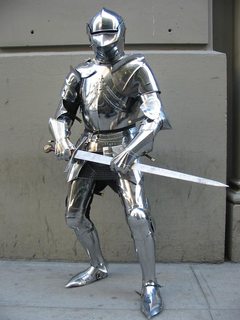 First off, why would you ever prohibit iron? It's not toxic or anything. Banning iron is like banning electricity. However, you might still be able to manage:
For cutting tools, you could use aluminum or titanium. It can form a knife very nicely (just look up "aluminum knife" on google).
For magnets, you could use nickel or cobalt. Despite being much rarer, we might be able to manage.
For building aluminum is surprisingly strong while titanium could be used. As a matter of fact, the limiting factor for most skyscrapers is not weight but actually height (it gets too hard to pump concrete up).
Reinforced concrete would be a nuisance but as discussed we could use bamboo.

It depends a bit on what you mean by that.

Scenario 1: Everyone would die. We need iron to survive. Also, let's say we wouldn't - this would ruin the economy since one would have to extract iron out of everything. There is no natural solid or liquid on this planet that doesn't contain iron. There is no substitute here.

Scenario 2: (If you just ban iron and not iron salts) Let's be non-pedantic and say our species has lived for 40k years. The use of iron dates back to about 4-5k years ago. Those are 35k years without iron. Really using iron to make useful stuff dates back to about 3k years ago - and only in the most developed parts of the world. Other cultures have discovered it much much later. Check out how they were doing basic things. Goodbye advanced technology anyways.

Scenario 3: (Not going back to the bronze age) Revolt, civil war, outside forces taking over the country/culture/whatever. Banning iron could simply not happen in our world unless the place is called North Korea or something. This again leads to everyone dying. Please be aware that at one point, iron had to be forbidden. Substitute iron with violence.

Those so far have not really been answers to your question, but please have them in mind when constructing your world.

Scenario 4: (everything goes as planned) Well, what do we need iron for? For almost everything. This goes well beyond this question. You would have to think of how to substitute iron in every single application. How many are there? I don't think anyone really knows. From construction work to machinery to cars to whatever - there is no single answer here. Iron is used in a catalyst in many chemical reactions as well as statues of famous people. Please be aware that there isn't a single answer to that question. You cannot just substitute iron with x and be happy. But it is certainly possible - and often very easy to google if you want to know how to do x without iron.

There isn't an answer to that question. But I have advice: Be aware of what you are planning and at least read the wikipedia entry of an element if you want to ban it in your story. This is really all just common knowledge, but you always have to go back to the basics with these questions ...

Not the answer you're looking for? Browse other questions tagged natural-resources materials or ask your own question.

7
Iron-free metallurgy
9
How feasible would mass scale metallurgy be for a post-apocalyptic civilization?
3
Which crucial ore (deficit or abundance) could plausibly dramatically change modern-like civilization?
18
What would be a source of iron to ward off faeries in todays world
11
In an interstellar/interplanetary civilization, which would be most common/cheapest in the market: Plastic or metals?
12
Is it possible to build an escalator without iron, with 16th century technology?
6
What resources would underground creatures look for in the surface?
12
What kind of hazardous alien waste would tear apart society trying to obtain it?
5
In a fantasy setting with 15th century metallurgy, what metals could have been refined that were not discovered in our own medieval period?
9
How hard would it be for a blacksmith to produce a cauldron?